European utilities will begin directly trading with one other using blockchain technology to stay ahead of emerging technology and stave off competition from agile startups and digital companies.

According to Reuters, energy operators previously tested blockchain technology for wholesale trading. However, Enerchain, the peer-to-peer trading initiative will go live in the second or third quarter of 2018 with a small number of electricity and gas contracts. The effort will test the utilities’ “ability to protect their margins by dominating novel automated trading architectures” that match energy producers with each other.

“Some utilities are taking part because they just want to test how blockchain works, others really want to find out whether it will pay off to use it in trading,” said Merz in a phone call to Bloomberg.

Enerchain could potentially lower the utilities’ transaction costs while helping them remain competitive in an industry with a growing number of competitors and energy supplies.

Enerchain is a software developed by Michael Merz, the managing director of Ponton. The software allows traders to anonymously trade on a decentralized peer-to-peer network without an intermediary or third party. Instead of handling multiple databases, blockchain technology enables a network of participants to maintain one record that is easily accessible and unchangeable.

Since traders can anonymously send orders to a decentralized network that can be accessed by other traders, the peer-to-peer platform can lower transaction costs by replacing the need for a broker. If Enerchain proves successful, it will also remove the need for exchanges like ICE or EEX. “We have developed an order execution process that works just like a typical OTC (over-the-counter) market front end,” said Merz.

Ponton has been building the software platform since 2016 and has worked with 39 power and gas traders. The German IT company, however, will not monopolize the Enerchain software. Instead, they plan to develop other products that can simplify peer-to-peer grid processes and speed up Germany’s green power supply.

Some utilities, however, operate in a fiercely competitive commodities sector and are reluctant to share their data openly. Unfortunately, this slows down progress for Enerchain and the development of its peer-to-peer platform.

Blockchain Tech Demand Expected to Increase in the Energy Sector

According to research firm IDC, they estimate that the global market demand for blockchain technology will more than double in 2018 to $2.1 billion from $945 million in 2017. Although demand is mostly from the banking and finance industries, IDC also expects “strong double-digit growth” in the energy sector between 2016 and 2021.

Although blockchain technology is still immature and cannot handle billions of dollar of transactions per second, energy trades do not require such high volumes and speed. They are not too complicated, with trades occurring once every few seconds. 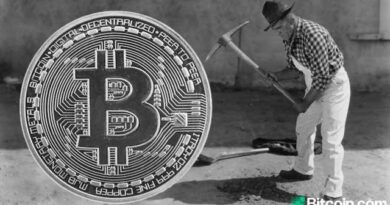