Ford’s blockchain solution will see cards and vehicles communicate with each other and facilitate alleviation of traffic congestion. Other companies into vehicle technology that uses blockchain include Volkswagen and Porsche and BMW.

Ford Global Technologies, LLC has been issued a patent for a vehicle-to-vehicle cooperation system that could spell out the digital future of vehicles and cars.

The patent for “Apparatus and methods […] for vehicle-to-vehicle cooperation to marshal traffic” describes a “Cooperatively Managed Merge and Pass (CMMP) system that uses cryptocurrency to help cars and vehicles communicate while on road.

It was published by the United States Patent and Trademark Office.

It comprises of individual token-based transactions and the users of the vehicles can agree to trade the crypto units or the ‘CMMP tokens.’ The tokens validate and authorize transactions in which the merchant vehicles, at the consumer vehicle request, are able to either occupy slower lanes or allow consumer vehicles to merge in their lanes and pass.

Consumer vehicles will have a number of CMMP tokens spent equivalent to the time allotted to the request.

“For example, a driver of a consumer vehicle which is running late for an appointment may request to pass. And any participating merchant vehicles for a duration of 10 minutes on a particular road or highway. Thus it is for 60 CMMP tokens, at a rate of 10 seconds preferential access per token”.

Thus it acts as a credit system.

Particular drivers of cooperative vehicles are able to access less congested lanes, drive on these lanes at higher speeds and merge and pass freely when needed. Drivers of the cooperative vehicles can opt into using the system and their behavior is thus monitor, record, and evaluate. Thus in a collective manner by themselves or by other participating vehicles.

“Merchant vehicles” are able to occupy slower lanes. In order to facilitate consumer vehicles to merge into their lanes and pass as needed.

Ford’s is one of the innovations about to enter the car and vehicle and probably change the way we move or transport goods. Especially in autonomous driving.

Dubai’s RTA is working on a blockchain database system that allows the tracking of vehicles records. Then Porsche announced integration and testing of a blockchain car tech that uses Ethereum smart contracts to enforce rules such as granting access granting to valets or authorized mechanics.

Piece by piece autonomous driving is becoming better with blockchain. Volkswagen and IOTA are also working on a blockchain-based vehicle solution as is BMW which is also partnering with VeChain. It is to improve supply chain efficiencies.

Will blockchain quicken realization of a real autonomous car? Let us know on Twitter and Telegram. 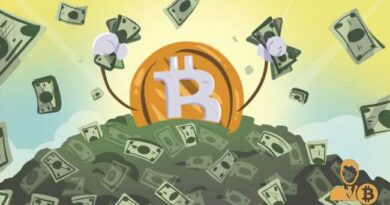