In a huge step forward for the Bitcoin SV space, RelayX wallet users can now purchase USDC RUN at relayx.com. Interestingly, USDC is the first publicly available token on BSV and Run 0.6, a token protocol that is not yet publicly released.

Stablecoins are controversial but the benefit of a token like running on BSV is immediately noticeable. 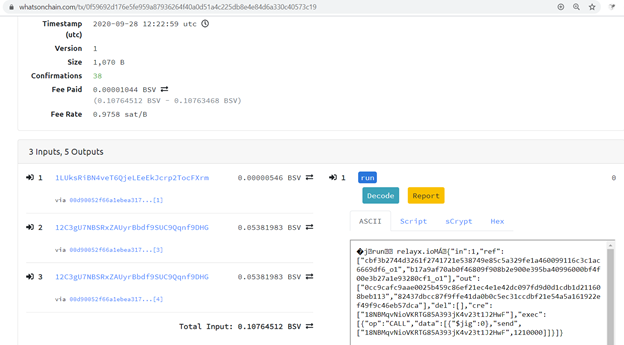 This begs the question why anyone would tolerate high fees given this alternative, a huge advantage of Bitcoin over other chains. Less obvious benefits but with greater potential are the public nature of the token and ability for any party to use it in their service or application.

Generally, Run tokens are ‘permission less’ meaning that anyone can send and receive them. Those wishing to integrate these tokens do not need to ask to send and receive but Relay does have some external controls in place for these specific tokens.

USDC RUN tokens can only be redeemed for BSV at relayx.com but users can send and receive these amongst themselves for goods and services today.

To get details about the token, the minting transaction can be referenced on-chain:

The name of the coin and decimal places can be viewed in the OP_RETURN output above. Integrators would reference this contract transaction, then could use the RelayX and Run JavaScript libraries to begin transacting with the tokens.

Run tokens are UTXO-based and place details about the state into an OP_RETURN output. Thus, these tokens are compatible with any Bitcoin script.

RelayX is encouraging others in the ecosystem to build off the tokens now so they do not have to. For example, the RelayX wallet does not support viewing token balances in-wallet—but they do not necessarily have to when anyone else can build that feature in their own app in a few lines of code.

This feature manifests the specialization that working on a shared ledger promotes. RelayX can leverage their exchange relationships and expertise to initially port the token over while allowing other developers in the space to build on top of that innovation.

Token transactions being done publicly on-chain, instantly with low fees is not something the crypto space has seen before. Exchanges like Binance and Coinbase are widely used but fall short in the user experience in terms of deposits and withdrawals.

This is due to a fundamental misunderstanding that zero-confirmation transactions lack security which is a principle that builders on Bitcoin SV have assumed as fact for quite some time now.

The implications of being able to get in and out of different tokens, while using different apps where the user also has full control are exciting. With the ability to do instant swaps to and from different tokens, users can use more applications and services more quickly, increasing the transaction count, volume, opportunity for value exchange and eventually *gasp* the price.

RIFT Protocol by ILCoin: 5GB Block Proves Scalability is Not a Problem

Alibaba Boosts its Holding in Sun Art Group in a Deal Worth $3.6…

Exploring the landscape of crypto regulations in sub-Saharan Africa