Antonio Brown: A Timeline of Drama

Antonio Brown, a four-time NFL All-Pro wide receiver whose career has spanned contracts with the Pittsburgh Steelers, Oakland Raiders and New England Patriots, is no stranger to controversy. On Sept. 10, 2019, Brown was accused in a civil suit sexually assaulting and raping his former trainer on three separate occasions in 2017 and 2018.

Wide receiver Antonio Brown made his debut and caught his first touchdown pass for the New England Patriots Sunday, days after being accused of rape and sexual assault in a federal lawsuit.

Brown made headlines throughout the NFL offseason by forcing a move out of Oakland and being picked up by New England. But that story took a much darker turn when a former trainer alleged that Brown forced himself on her during three encounters in June 2017 and May 2018. Brown has denied the accusations.

The NFL plans to meet with the former trainer Monday.

He was ineligible to play for the Patriots in Week 1, but hauled in a 20-yard touchdown pass from quarterback Tom Brady in the second quarter against the Miami Dolphins.

Brown is accused of exposing himself and kissing the woman without permission during one training session in June 2017, and then ejaculated on the woman during a second encounter at Brown’s home later that month, according to court documents obtained by FOX Business.

New England coach Bill Belichick declined to comment on the allegations during a press conference ahead of the game, telling reporters that he has "worked hard" since arriving. 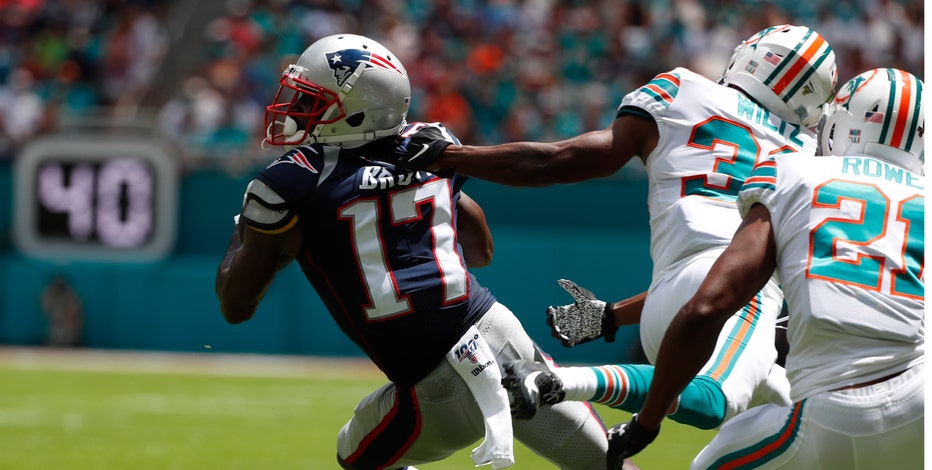 Fox Sports 1 personality Rob Parker said Thursday that Brown should be allowed to play football while the lawsuit is being adjudicated.

"I think you let it play out. You allow him to play and earn a living until there's a judgment or there's some sort of finality to it, and then you can make your case,” Parker said on his radio show. “Anybody can file a lawsuit against you. A plumber can file a lawsuit, there can be just almost anything. I don’t know, and I’m just being hypothetical…Do you just go in and act immediately when there’s some sort of a lawsuit and take someone from their job?”