Asian stock markets are mostly higher on Friday, following the positive cues overnight from Wall Street on better-than expected labor market data, with jobless claims dropping to their lowest level since the early days of the pandemic. However, concerns about rising coronavirus cases and extended economic lockdowns in Europe continue to cap much of the upside momentum. Asian markets ended mostly higher on Thursday.

Australian stock market is higher on Friday, extending gains of the previous two sessions, with the benchmark S&P/ASX 200 moving above the 6,800 level, buoyed by gains in financial and mining stocks. The cues overnight from Wall Street were also positive on upbeat labor market data. The market is heading for the biggest weekly gain in a month.

The major miners are gaining. Fortescue Metals is up almost 2 percent, BHP Group is edging up 0.2 percent and Rio Tinto is gaining more than 1 percent.

Among tech stocks, Afterpay is losing more than 1 percent, while WiseTech Global and Appen are up nearly 1 percent each.

Among the big four banks, Westpac, ANZ Banking and National Australia Bank are adding almost 1 percent each, while Commonwealth Bank is flat.

Shares in AMP are gaining almost 3 percent after the beleaguered financial firm reiterated that Francesco De Ferrari will remain as chief executive despite an AFR report claiming that he was set to resign by the end of Thursday.

Shares in Lynas are up more than 4 percent after the rare earths miner reported a better-than-expected financial result and were optimistic that the rare earths market is finally ready for prime time.

In the currency market, the Aussie dollar is trading at $0.760 on Friday.

The Japanese stock market is higher on Friday, extending gains from the previous session, with the benchmark Nikkei 225 breaking above the 29,000 mark, following positive cues overnight from Wall Street on better-than-expected labor market data.

The major exporters are higher. Mitsubishi Electric, Canon and Sony are gaining almost 2 percent each, while Panasonic is adding almost 1 percent.

In the currency market, the U.S. dollar is trading in the lower 109 yen-range on Friday.

Elsewhere in Asia, Shanghai, Singapore, South Korea, Taiwan, Indonesia, Malaysia and Hong Kong are gaining between 0.1 and 1.2 percent each. Meanwhile, New Zealand is bucking the trend.

On Wall Street, stocks showed a significant turnaround over the course of the trading day on Thursday. The major averages all bounced well off their lows of the session and into positive territory.

Meanwhile, the major European markets ended the day mixed. While the U.K.’s FTSE 100 Index fell by 0.6 percent, the French CAC 40 Index and the German DAX Index both inched up by 0.1 percent.

Crude oil prices pulled back sharply on Thursday, weighed down by worries about the outlook for energy demand due to the extension of lockdown measures in several countries. West Texas Intermediate Crude oil futures for May ended lower by $2.62 or 4.3% at $58.56 a barrel. 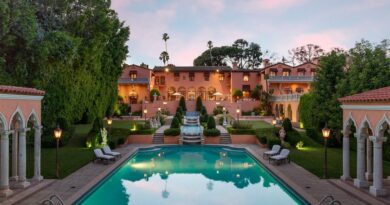 The iconic mansion from 'The Godfather' is back on the market at a $105 million discount. Look inside the Beverly Hills estate.