Boeing delivered only 11 commercial jets last month, three of which were freighters and one a passenger aircraft for the military. That means so far in 2020, the company has delivered only 98 commercial planes to customers — less than a third of what it delivered in the same nine-month period last year.
The delivery figures are key for Boeing, because it receives most of the payment from customers at the time of delivery.

“We continue to work closely with our customers around the globe, understanding their near term and longer term fleet needs, aligning supply and demand while navigating the significant impact this global pandemic continues to have on our industry,” said Boeing Chief Financial Officer Greg Smith.
Not surprisingly, once again there were no new jet orders in September.

Additionally three orders were canceled for the 737 Max, the troubled aircraft that has been grounded since March 2019 following two fatal crashes that killed 346 people.
Overall Boeing has had 229 jet orders canceled so far this year — almost all them for the 737 Max. Boeing had hoped to have approval by the middle of this year for the plane to once again carry passengers, but that has become just the latest in a series of missed target dates for its return.
Last month Boeing also reclassified 48 previous orders as no longer certain enough to count in its backlog of orders. More than 800 of its jet orders have been reclassified this year.
That means a total of 1,050 orders have been lost or classified as uncertain this year. But Boeing still has a backlog of more than 4,300 planes from its customers. 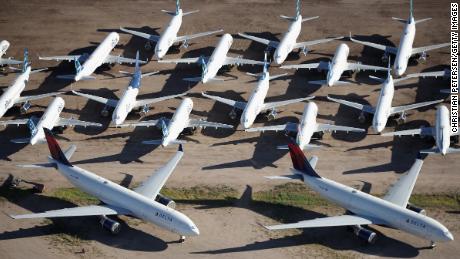 Still, Boeing (BA) has been forced to slow its production rate as the pandemic continues to fuel a slump in air travel demand. The company has said it is considering consolidating production of its most profitable plane, the 787 Dreamliner, at one of the two factories that builds them. It is also in the process of cutting staff, through voluntary and involuntary layoffs.

Passenger airlines worldwide have parked many of their planes, and they don’t have much need to take deliveries of additional aircraft.
United Airlines (UAL) did take deliveries of three 787 Dreamliners in September. Turkish Air took two and Taiwanese airline EVA took one, with the seventh 787 going to an aircraft leasing company. But none of Boeing’s other customers took deliveries in the month.
Source: Read Full Article