WASHINGTON — President Trump’s tax cuts have been very good to big banks. For foreign-owned banks, they could get even better.

The cuts allowed America’s largest banks to save an estimated $16 billion collectively in taxes last year, a windfall that helped those firms reward shareholders through stock buybacks and dividend payments.

The savings flowed largely from changes to the corporate rates, which fell to 21 percent from 35 percent under the new law. For years, domestic banks’ effective tax rates had been higher than those of many other companies’, so when they fell, those institutions enjoyed outsize benefits.

Foreign-owned banks reaped benefits as well, though the structure and reporting of their global financial operations make them more difficult to quantify. Late last year, they won a potentially lucrative victory in a proposed Treasury Department regulation that puts into effect a part of the 2017 tax law that established a global minimum tax on multinational corporations. Analysts say the proposed regulation, which companies must apply even though it has not been made final, could allow foreign banks to largely avoid the minimum tax.

[Earnings reports this week showed that the five biggest banks in the United States continue to benefit from the tax cuts.]

The regulation effectively provided a carve-out that would allow foreign banks to reduce or avoid a new tax, known as the base erosion and anti-abuse tax or the BEAT. Treasury’s rule would allow foreign banks to minimize their tax liability by sending large payments back to their headquarters in the form of interest payments, which would not be counted toward the minimum tax.

Many foreign banks, and an industry lobbying group, welcomed the proposal — and quickly pushed Treasury to expand it further, by exempting even more transactions between banks and their overseas affiliates from the tax. The final regulations will be decided this summer.

“There’s a lot of uncertainty” about the anti-abuse tax, said Andrew J. Silverman, a tax analyst at Bloomberg Intelligence. “But a lot of companies are taking comfort from the fact there are a lot of big exceptions to it.”

Financial filings, corporate earnings call transcripts, and industry and company letters to Treasury officials underscore the degree to which the tax cuts have helped banks financially. Some of the ways appear to go against the intention of the Republicans in Congress who drafted and approved the law in a two-month flurry at the end of 2017.

The favorable treatment for banks is contributing to a steep decline in corporate tax revenues, which has helped sharply increase the federal budget deficit. Corporate receipts were down more than 25 percent, or nearly $60 billion, through June for the 2019 fiscal year, compared with the 2017 fiscal year, before the tax cuts took effect. The budget deficit is on track to top $1 trillion in 2019, a 28 percent increase from 2018.

The 10 largest United States banks — a group that includes JPMorgan Chase, Wells Fargo and Goldman Sachs — had a combined income tax expense of $35 billion last year, equivalent to 20 percent of their pretax earnings. Their average effective rate in the five years through 2016 was 29 percent. If last year’s pretax income had been taxed at that rate instead of the post-tax-cuts rate, the banks’ income tax expense would have been $51 billion, or $16 billion more.

Money saved from having a lower tax rate helped pay for a surge in stock buybacks and dividend payments to shareholders. Last year, the 10 largest American banks distributed over $104 billion to their shareholders in these two ways, an increase of 25 percent from nearly $84 billion in 2017. 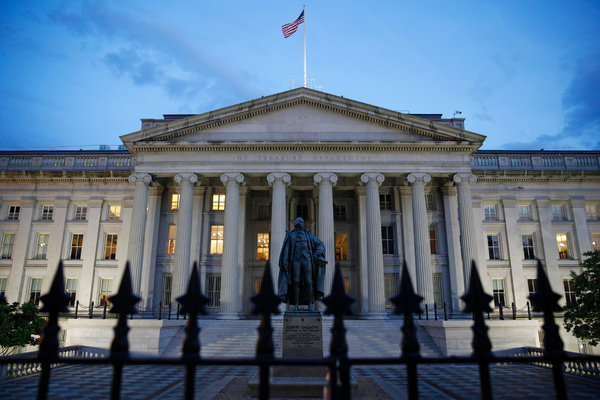 Some banks are reporting tax rates well below the 21 percent statutory rate. Wells Fargo said this week that its effective tax rate — the rate reported on financial statements — was just over 17 percent in the second quarter. JPMorgan’s rate for the period was just shy of 15 percent, in part because the bank enjoyed a tax benefit after tax audits were resolved.

Those savings continued to pad bank profits in the second quarter, according to financial filings released this week, and helped to offset weakness in trading revenue. Citigroup’s larger-than-expected earnings per share, for example, were almost entirely the result of the corporate rate cut and its stock repurchases.

Large foreign banks doing business in the United States disclose income tax expenses for their American subsidiaries, but it is not clear how useful they are for assessing whether the United States tax bill has had an effect on their tax rates. That’s partly because they don’t have to break out, in public disclosures, their liability under the BEAT.

Those banks received what many analysts saw as a break from Treasury in December, when it issued preliminary regulations governing the BEAT, which is part of the tax law’s overhaul of how the United States taxes companies that operate in more than one country. That overhaul has taken a political and public-opinion back seat to the corporate rate cut and changes in individual taxes, but it has drawn intense activity from business lobbyists seeking to shape the new rules to minimize their tax bills.

The BEAT is meant to curb a practice known as “earnings stripping,” in which multinationals avoid American taxes by shifting profits to other branches of the company operating in lower-tax countries overseas — often in the form of interest payments.

It is a sort of minimum tax, forcing companies that send their profits offshore to pay at least some American tax on them.

But in its December regulations, which provided nearly 46,000 words of details on how the provision applies to companies, Treasury essentially said certain interest payments made by foreign-owned banks are not subject to the calculations that determine that minimum tax. The move alarmed some former congressional aides who were involved in the tax effort. They said the exemption ran afoul of lawmakers’ intent in passing the tax overhaul.

The law’s authors tried to balance the international provisions to favor neither American-based companies nor foreign-owned ones. Throughout its drafting, they repeatedly asked the congressional Joint Tax Committee to run tax models to simulate the effects on both types of companies, eventually finding a near-50-50 balance. The Treasury regulations, which included the exemption that foreign banks had pushed for, could upset that balance.

Foreign banks received the regulations warmly but asked Treasury to go even further, in the name of fairness. The Institute of International Bankers, an industry lobbying group, told Treasury officials in a letter that it “wishes to express its appreciation for the strides made by the proposed regulations.”

The institute went on in the letter to push Treasury for further tweaks, in final regulations, that would reduce potential bank liability under the tax even more. Those highly technical changes would, if adopted, essentially exclude an even broader set of payments between banks and their foreign affiliates from the minimum tax calculations.

Bank reactions to the December regulations have been mixed, in part because some foreign banks are structured in ways that expose them to more BEAT issues than others. UBS officials reported that they expected not to incur any liability under the minimum tax, in light of the regulations. Credit Suisse said in February that it expected to still have to pay the tax, which it expected would add about 2 percentage points to its effective tax rate.

Treasury is expected to issue final regulations this summer, and the banks are still trying to win favorable changes to the preliminary rules.

“We continue to have discussions with Treasury about the unique nature of foreign banks operating in the U.S. and how various aspects of the proposal impact our U.S. operations,” said Chris Rosello, United States head of public affairs for HSBC.