New York (CNN Business)Former Google CEO Eric Schmidt on Tuesday blasted the “failure of leadership” in America’s coronavirus response and warned of more hardship to come unless dramatic steps are taken to crush the virus.

“People have died unnecessarily because government was slow to react to common and simple things like mask wearing and social distancing,” Schmidt said during a podcast, according to a transcript first shared with CNN Business.
The billionaire, who led Google between 2001 and 2011, said the federal government was “confused” and “caught flatfooted” because the country lacked integrated data systems. 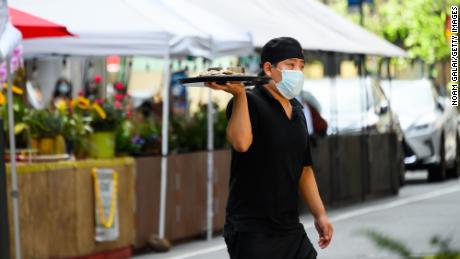 “Because there’s a failure of direction, a failure of leadership at pretty much every level of our government, people are left to make their own calculations as to what they should be doing,” Schmidt said during “Reimagine with Eric Schmidt,” a newly launched podcast that features interviews with leaders in business, government and science.
The comments mark the tech mogul’s most critical assessment yet of the federal government’s handling of the pandemic. And they come as President Donald Trump’s coronavirus response plays a central role in the presidential election campaign.

Schmidt, who now serves on the board of trustees of the Mayo Clinic and as a technical adviser to Google owner Alphabet (GOOGL), has frequently donated to Democrats. He is one of the leading backers of Future Forward USA, a Democrat-leaning political action committee, according to OpenSecrets.

Warns of ‘lost year’ of GDP, education and football

In stark contrast to the euphoria on Wall Street, where major market benchmarks have recovered their pandemic losses, Schmidt painted a cautious picture about the road ahead.
“I’m assuming this is going to go on for a long time unless there is really a national focus on common mitigation measures,” the former Google CEO said.
Schmidt, who has a net worth that Forbes pegs at $16 billion, warned that if Americans aren’t “behaving in a sane way” by wearing masks and avoiding large crowds, then “rotating pandemics” could continue until the summer of 2021.
“That’s a lost year of GDP growth, of wealth and healthcare, of student’s education, of people seeing their friends, of going to football games, and all the things that we took for granted before January,” Schmidt said. “If we don’t act now, we’ll lose another year.”

During the “Reimagine with Eric Schmidt” podcast, former Trump-appointed FDA Commissioner Scott Gottlieb expressed concern about a “rotating series of regional epidemics that as soon as one region seems to get some control over their epidemic, other parts of the country heat up.”
For instance, Gottlieb pointed to spreading infections in the Midwest, compared with the sharp drop in New York.
“This is likely to be the situation as we roll through the fall and the winter if we don’t come up with a more uniform approach across the country that we can just start to crush the virus,” Gottlieb said. “We’re just going to keep infecting ourselves.”
Gottlieb, who sits on the board of directors at Pfizer (PFE), which is among the drug makers developing a coronavirus vaccine, warned of another “six hard months ahead of us” before a vaccine is available for at least certain parts of the population.
“Take it simple for the next six months,” Gottlieb advised the public. “Try to stay home a little more, try to stay with people that you know, so you can reduce the number of social interactions. Instead of going shopping twice a week, try to condense your shopping into one trip.”

Bigger picture, Gottlieb said the pandemic shows how the federal government needs to take a different approach toward investing in public health infrastructure.
“We need to think about this kind of preparedness as a matter of national security,” Gottlieb said.
Source: Read Full Article