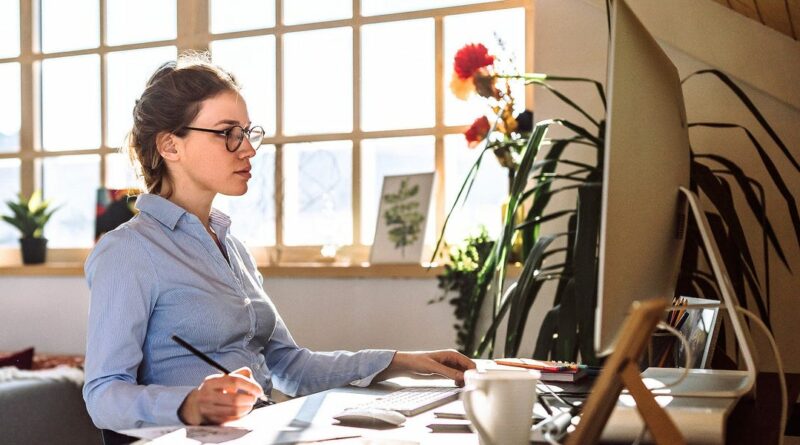 Since COVID-19 first sent vast swaths of US office workers home last spring, one of the biggest questions has been whether they’ll get to keep doing their jobs remotely after the crisis recedes. Two new studies by economists suggest that many will, mostly through a hybrid arrangement in which employees divide their weeks between the office and home.

The findings are some of the strongest indications yet that the country’s newfound embrace of remote work will outlast the pandemic. Potentially tens of millions of professionals could benefit. But the studies also show that the new work-from-home perks will be largely limited to the most privileged in the workforce.

In one of these papers, Alexander Bick at Arizona State University, Adam Blandin at Virginia Commonwealth University, and Karel Mertens at the Federal Reserve Bank of Dallas started tracking the prevalence of remote work in May. In December, they asked respondents an additional question in their survey: In 2022 and later, how many days do you expect to commute to work?

Bick, Blandin, and Mertens found that a striking number of people — almost half of college-educated Americans — were preparing to keep working from home in some capacity after the pandemic. If those expectations bear out, that would mark a sea change from pre-pandemic times, as the chart below shows.

But respondents also expected to work from home with less intensity in the future than they are right now. Throughout the crisis, more college-educated workers have been working a fully remote schedule than a hybrid one. In 2022 and beyond, it will likely be far more common to adopt a hybrid workweek: 32% said they expected to be partially remote and 14% said they’ll be remote full time, per the data on workers with a Bachelor’s degree that Bick and his co-authors provided to Insider.

The findings echo the growing popularity of the hybrid model especially within tech circles, with Salesforce announcing earlier this month that most of its staff will soon adopt a partial work-from-home schedule. Spotify, Zillow, and VMware have pledged to create a hybrid option, and Google CEO Sundar Pichai has hinted at such a change, too.

By having employees divide their weeks between the home and office, these businesses are hoping to get the best of both worlds. They want their staff to have the flexibility and productivity that they have enjoyed in their remote setups, but they also don’t want to sacrifice too many opportunities for the kind of collaboration that happens more easily in person.

A less rosy future for workers with low pay

But only a certain subset of workers will have access to such an option. That unequal future featured prominently in Bick’s survey, which showed that people who are highly educated, highly paid, and white expect to work from home in 2022 far more than their low-paid, less educated and Hispanic counterparts. A separate study by economists from Instituto Tecnologico Autonomo de Mexico, Stanford University, and the University of Chicago released in January showed similar disparities.

That paper — written by Jose Maria Barrero, Nicholas Bloom, and Steven Davis — was also based on surveys of workers’ schedules throughout the pandemic, as well as their expectations for the future (their college-educated respondents had post-COVID expectations that were broadly in line with those in Bick’s survey, although with slightly fewer expecting to work from home). Barrero and his co-authors added an extra twist by asking respondents not only how often they expected to work remotely in the future but also how often they would prefer to.

Making that distinction revealed interesting results. For example, people of all income levels said they would like to work from home for about half the week after the pandemic. But only the most highly paid workers said their employers’ plans came close to what they hoped. As the chart below shows, the less people earned, the greater the gap between what they wanted and what they would get.

Those disparities have already played out in the pandemic.

Consider the different trajectories for respondents in Bick’s study with varying levels of education. In the early months of the crisis, college-educated Americans switched to remote work en masse (see the navy bar on the far right of the chart below). And even as many businesses across the country reopened in the summer and fall, many of those workers stayed remote through the end of 2020 (see the purple bar on the far right).

In comparison, people with less schooling didn’t see nearly as much of an increase in remote work last spring. And even those small gains were nearly wiped out by December, as shown in the almost non-existent purple bar on the far left. Similar patterns held for white respondents compared with their Hispanic counterparts.

These big disparities are new: Working from home wasn’t nearly as segregated by class or race before the pandemic. Remote workers did tend to be white, have higher incomes, and more schooling in February 2020, but only slightly so, according to the paper by Bick, Blandin, and Mertens. In other words, the pandemic served to cleave the have- and have-nots in the US labor market in yet another way. And both studies suggest that those disparities will become permanent ones.

As vaccination accelerates across the US, Bick says he looks forward to seeing if his respondents’ expectations bear out in reality. He and his co-authors are expecting to keep surveying Americans through at least March.

Teenage arrests, blank protest signs, and a key election postponed: What one month of China's new national security law for Hong Kong has looked like

This Week In Music: Jonny Z Reveals How He Built A Music Empire From A Flea Market