This is an automated machine translation of an article published by Business Insider in a different language. Machine translations can generate errors or inaccuracies; we will continue the work to improve these translations. You can find the original version here.

Flights from Paris to Lyon or Bordeaux will no longer be available to French people in the future. In the midst of the Corona pandemic, the government wants to ban all domestic flights, provided that the destination can also be reached in two and a half hours by train. It’s just one step in how France intends to severely restrict domestic air travel and at the same time favor rail travel.

In Germany, the government is still a long way from making such concrete decisions. But there is no shortage of ideas on how the pandemic could be used to continue to reduce flights and CO2. In a discussion paper, the non-profit organization Stay Grounded and the British trade union Public and Commercial Services Union (PCS) suggest permanently reducing air traffic even after the pandemic, i.e. simply maintaining the low number of flights – and without leaving employees in the lurch.

According to the authors, employees whose jobs are lost could be retrained for other industries, such as rail companies. Deutsche Bahn had already poached employees after the bankruptcy of German Wings and Sun Express. Pilots could then become train drivers, and flight attendants could work as train conductors, although their incomes often differ considerably. But can such an idea work?

Air traffic could also be reduced permanently after the pandemic

For the authors of the “Stay Grounded” initiative and the British union, the pandemic is an ideal time to shut down the airline sector. In Europe alone, there were nearly 70 percent (66 percent) fewer flights on the first of February than a year ago. The airline industry itself believes that air traffic will not return to normal for another year or two, i.e. next year or the year after next at the earliest.

So if we continue as we have been, videoconferencing could replace a lot of air travel. Travelers could also return to traveling longer distances on trains or ships. Female airline employees could be employed directly by railroads, the authors write. This might not correspond to their original dream job, but given the scale, it is questionable whether this should be an argument for delaying the urgently needed change.

Verdi representative Dennis Dacke also added in an interview with Greenpeace magazine that a pilot working as a train driver would have to do without up to 10,000 euros gross per month. With the training debts of around a quarter of a million euros that are common for this occupational group, that is not pleasing, but “as a rule” it is feasible.

Indeed, many aviation workers have skills that can be transferred to other industries. However, the question is whether they all want to work in other industries as well.

Pilots have learned their job because it is their vocation, says Kirsten Lühmann, transport policy spokeswoman for the SPD. “We can’t just turn 1,000 pilots into 1,000 train drivers, even if it benefits climate protection,” she says. The same applies to flight attendants, she adds; they have a different job on planes than on trains. But Lühmann also sees a danger: “Resistance to political measures for climate protection grows with such ideas,” she says. Where it happens voluntarily – as, for example, after the demise of Germanwings when some former flight attendants were specifically approached by Deutsche Bahn – it is, on the other hand, a very sensible measure.

Cooperation with Deutsche Bahn could work well, explains Deussen. But a certain lead time is needed so that employees can prepare for a changeover in the long term.

But the demands of “Stay Grounded” and PCS go even further: they call for a training and hiring freeze for the aviation sector so that people would retire, change jobs, and not be replaced. Trainees who had already accumulated large debts and had no chance to continue working should be financially supported.

However, Deussen considers such a demand to be too radical: The Ufo union is not in favor of a blanket hiring and training freeze, he says. Instead, he wants better working conditions for hiring: “Flight attendants should only be hired if the airlines have fair working conditions and a climate-friendly business model,” he says. If the airline industry were to wake up from the Corona pandemic, he says, both should be met.

Apart from the economic situation, Kirsten Lühmann considers the training and hiring freeze to be a risk for a completely different reason: “Without young talent, the staff is aging,” she says. New employees are needed so that old knowledge can be passed on to new ones and vice versa. “Otherwise, the company stagnates,” says Lühmann. Innovation would then be difficult to achieve. That can be toxic for airlines if they want to compete with others, he said.

The current trend, however, does not argue for increased hiring: The group will need fewer employees even if things pick up. As early as last November 2020, one in five cockpit jobs at Lufthansa was at risk. Things don’t look much better at the competition: Last year, the German Air Transport Association estimated that around 60,000 out of a total of 255,000 jobs could be lost at German airlines and airports.

Lühmann also predicts this development: It will become a sliding process in which more and more jobs in the airline industry will disappear in 10 to 15 years. Her solution, irrespective of climate protection, is as follows: “We need to continuously offer retraining on a voluntary basis.” Flying, on the other hand, would have to be made more climate-friendly with synthetic fuels and, at the same time, rail lines would have to be expanded that could partially replace domestic flights.

Tech stocks can soar another 25% during ‘next chapter’ of economic recovery, Wedbush analyst says 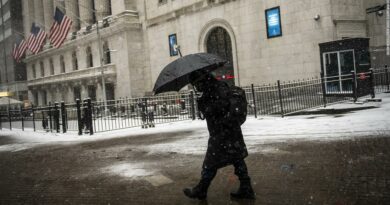 A challenging year for women: Millions are out of work