The retailers are all part of entrepreneur Philip Day’s Edinburgh Woollen Mill Group (EWM), which warned last month it was on the brink of collapse.

The Cardiff-based budget fashion chain Peacocks employs 4,369 staff across its 423 stores, while the upmarket brand Jaeger employs 347 people across 76 outlets. The Jaeger business also includes the formalwear chains Jacques Vert and Austin Reed. They were put into administration before a legal deadline on Friday after talks on a rescue package failed.

No redundancies or permanent store closures have so far been announced, and administrators said the businesses would continue to trade while they consider options for their future.

Tony Wright, a joint administrator and partner at the advisory firm FRP, said: “Jaeger and Peacocks are attractive brands that have suffered the well-known challenges that many retailers face at present. We are in advanced discussions with a number of parties and working hard to secure a future for both businesses.”

Why are UK high street retailers in trouble?

Physical retailers have been hit by a combination of changing habits, rising costs and broader economic problems as well as the coronavirus pandemic. In the past few years names such as Mothercare, Karen Millen, Toys R Us, Maplin and Poundworld have disappeared from the UK high street as a result.

In terms of habits, shoppers are switching to buying online. Companies such as Amazon have an unfair advantage because they have a lower business rate bill, which holds down costs and enables online retailers to woo shoppers with low prices. Business rates are taxes, based on the value of commercial property, that are imposed on traditional retailers with physical stores.

At the same time, there is a move away from buying “stuff” as more people live in smaller homes and rent rather than buy. Uncertainty about the economy has also slowed the housing market and linked makeovers of homes. Those pressures have come just as rising labour and product costs, partly fuelled by Brexit and the coronavirus, have coincided with economic and political uncertainty that has dampened consumer confidence.

Retailers with a high street presence want the government to change business rates to even up the tax burden with online players and to adapt more quickly to the rapidly changing market. They also want more political certainty as the potential for a no-deal Brexit means some are not only incurring additional costs for stockpiling goods but are unsure about the impact of tariffs at the end of 2020. Retailers also want more investment in town centres to help them adapt to changing trends, as well as a cut to high parking charges, which they say put off shoppers.

In the December 2019 Queen’s speech, the government announced plans for further reform of business rates including more frequent revaluations and increasing the discount for small retailers, pubs, cinemas and music venues to 50% from one-third. It has also set up a £675m “future high streets fund” under which local councils can bid for up to £25m towards regeneration projects such as refurbishing local historic buildings and improving transport links. The fund will also pay for the creation of a high street taskforce to provide expertise and hands-on support to local areas.

Day is thought to want to rescue Peacocks but has been looking for a buyer for Jaeger and other brands, including Austin Reed and Jacques Vert.

EWM said: “In recent weeks we have had constructive discussions with a number of potential buyers for Peacocks and Jaeger but the continuing deterioration of the retail sector due to the impact of the pandemic and second lockdown have made this process longer and more complex than we would have hoped.”

The group said it could not extend further a standstill agreement agreed with the high court six weeks ago.

EWM added: “Therefore, as directors, we have taken the desperately difficult decision to place Peacocks and Jaeger into administration while those talks continue. We will continue to do all we can to support FRP advisory in trying to secure the best outcome possible for these businesses.”

Two other chains owned by Day – Edinburgh Woollen Mill, which specialises in knitwear and fashions for the over-50s, and Ponden Mill homewares – called in administrators earlier this month. Just under 900 people immediately lost their jobs and a further 2,000 roles remain at risk at those two chains.

The businesses have suffered from years of underinvestment and were ill-prepared for the massive switch to online shopping brought about by the pandemic.

All fashion retailers were already under pressure from a slowdown in spending on clothing, but the shift to working from home, high street lockdowns, fall in tourist numbers and the closure of pubs, clubs and bars have all increased the pain. 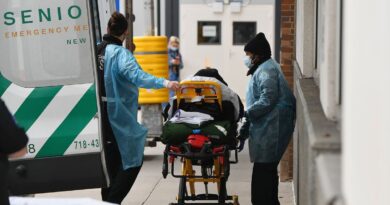