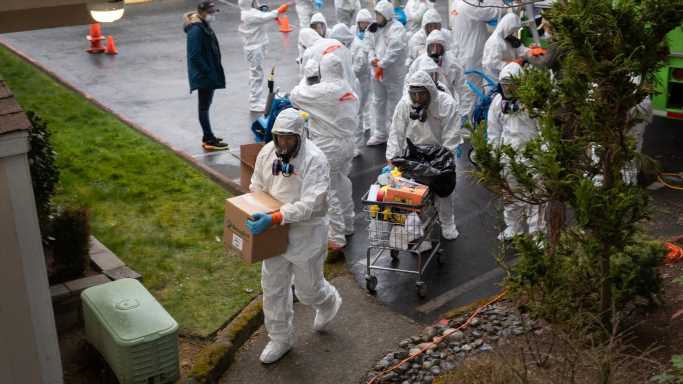 It has now been 40 weeks since the first shipments of the COVID-19 vaccine were sent out to states, kicking off the largest vaccination campaign in human history. As of September 19, 466,561,785 doses of the vaccine have been sent out across the country — equivalent to 142.1% of the U.S. population.

While the initial distribution of the vaccine took longer than federal projections had indicated, in recent months the U.S. has made great leaps in the worldwide race to administer vaccinations — and some states are faring far better than others. Under the current system, led by the White House COVID-19 Response Team, the Centers for Disease Control and Prevention sends states limited shipments of the vaccine as well as funding and tasks them with distributing the vaccine in accordance with relatively loose federal guidelines. The distribution of the vaccine is based on the size of the adult population in every state, which — according to some experts — can create inequities in states where a larger share of the population is at risk.

The largest outlier is Wyoming, which has received the fewest doses per capita and is the smallest state.

At this stage of the rollout, the number of doses administered in Vermont is equivalent to 142.4% of the state population — the largest share of any state. The lowest vaccination rate is in Idaho, where 85.4% of residents have received a dose of the vaccine. Nationwide, the number of doses administered is equivalent to 117.5% of the U.S. population.

While a majority of Americans remain unvaccinated due to a lack of supply, there are some who have no plans to receive a vaccine at all. According to a survey from the U.S. Census Bureau, 59.2% of U.S. adults 18 and over who have not yet received the vaccine will either probably not or definitely not get a COVID-19 vaccine in the future. The most common reason cited for not wanting a vaccine was being concerned about possible side effects. Other commonly cited reasons include not trusting COVID-19 vaccines, not trusting the government, and that they were planning to wait and see if it is safe.

To determine the states getting the most vaccines from the federal government, 24/7 Wall St. reviewed data from the Centers for Disease Control and Prevention. States were ranked based on the number of vaccines administered as of September 19 per 100,000 residents. Vaccine counts were adjusted for population using one-year data from the Census Bureau’s 2019 American Community Survey. Data on confirmed COVID-19 cases as of September 19 came from various state and local health departments and were adjusted for population using 2019 ACS data. Data on the percentage of adults who probably will not or definitely will not get a COVID-19 vaccine and their reasons for not getting one came from the Census Bureau’s Household Pulse Survey, conducted from August 18, 2021 to August 30, 2021.