Never in history has the UK economy grown more quickly than it did in the third quarter of 2020. Official figures show that the spending spree of the summer was even stronger than previously expected, resulting in a 16% increase in national output.

Yet the packed beaches, the busy shops and the battle to get restaurant bookings during August’s eat out to help out promotion already seem like ancient history. It is of only passing interest that the Office for National Statistics now says the slump in gross domestic product in the spring was slightly less severe than first feared and the rebound between July and September was a tad stronger.

But the second wave of the pandemic meant the buoyancy of the summer was short-lived. As the ONS figures for the public finances show, the tightening of restrictions on activity have had a marked impact. The talk now is of a double-dip recession rather than a V-shaped recovery.

Keeping millions of workers on furlough comes at a price. So does the extra investment in the NHS. The government borrowed £31.6bn last month – a record for a November and the third highest monthly total on record.

In the first eight months of the 2020-21 financial year, borrowing topped £240bn. Compared with a year earlier, tax and national receipts were down by £38.3bn while day-to-day spending by the state was up by £147.3bn.

This pattern looks set to continue. The fact that Rishi Sunak has extended the furlough to the end of April is a clear sign that ministers expect tough social distancing rules to be in place for months to come. The Office for Budget Responsibility was expecting full-year borrowing of £394bn even before the new tier 4 curbs were introduced at the weekend.

Sunak may take some comfort from the small print of the ONS national accounts figures, which shows that the summer boom was in part due to households running down the savings they had accumulated during the spring lockdown. The savings rate – the proportion of household income saved rather than spent – fell from 27.4% to 16.9% in the third quarter but still more than double its long-term average of 8%.

According to Ruth Gregory, a UK analyst at Capital Economics, that implies scope for spending to pick up strongly when restrictions are lifted. That happy day, though, is some way off. 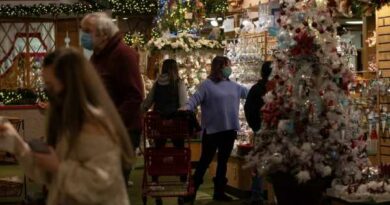