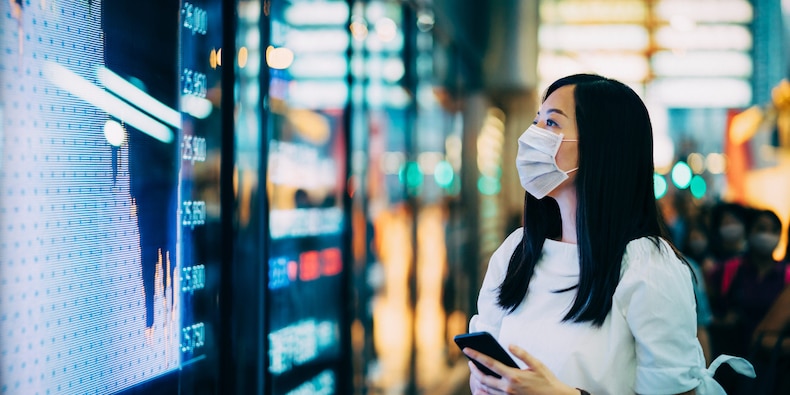 US shares slip on the first trading day of the week, after falling from record highs last week as investors remain cautious over the slew of corporate earnings ahead as well as the ongoing vaccine rollout in the US.

David Wagner, portfolio manager at Aptus Capital Advisors said he sees similarities in the current economy to the 1920s, with plenty of pent-up demand, economic growth, and technological advancements. Wagner did add that he does not think the US will witness the higher-than-expected given the record amount of fiscal and monetary stimulus.

For bonds, Rhys Williams, CIO at Spouting Rock Asset Management, thinks yields will peak in the next three months due to the excitement about reopening, and what will likely be an extraordinary second-quarter GDP print.

On Friday, the Dow Jones industrial average and S&P 500 closed at record highs as investors remained optimistic about the global recovery amid strong economic data.

Shares of GameStop rose 6% as the company announced that Its CEO George Sherman will step down on July 31 or upon the appointment of a successor. Shares were already up even before the company’s announcement, boosted by the company’s progress in making major changes led by activist investor Ryan Cohen.

Over the weekend, bitcoin slipped to 17% to its lowest since February but recovered on Monday, regaining some stability. It was only last week when the cryptocurrency hit an all-time high of over $64,000on excitement over Coinbase’s direct listing. The most popular cryptocurrency rose by 2% to above $57,600 on Monday.

“The euphoria did not last for too long though, as more investors started to question if the rally went too far in the short-term, and decided to cash I,” said Milan Cutkovic, a market analyst at Axi.

Most cryptocurrencies tumbled over the weekend with Dogecoin bucking the trend. The meme-based token on Monday rose 35% to an all-time high above $0.41.

Still, not even dogecoin advocate Mark Cuban knows what to make of the cryptocurrency’s 400% price gain over the past week. The billionaire investor, however, said he expects the coin to settle into a price range over time.

“I have no idea what it means,” the Dallas Mavericks owner told CNBC.”Supply and demand is undefeated. So it will find its level.”

As Transit Systems Brace For Cuts, the Last Recession Is a Warning