VIRGINIA BEACH, Va. – The shooting that killed 12 people at a municipal building here has left many seeking guidance, a need that churches rushed to meet Saturday.

At the Bridge Church in Virginia Beach, about 100 people gathered Saturday night to try to make sense of what many had described as a senseless act. As vigilgoers entered the auditorium, they saw the names of the 12 deceased on three huge screens.

“Tonight we pray for those families crushed in spirit,” said Archie Callahan, a Bridge Church pastor. “We bear their burden in prayer.”

The vigil was interspersed with sermons and prayer songs. People bowed their heads, shut their eyes, and sometimes raised their arms to the ceilings. They swayed and sang “We will rise.”

Cathy Whitley, left, of Virginia Beach and Brenda Flowers of Brentwood, TN, kneel in prayer at a vigil outside the Regal Cinemas in the Strawbridge neighborhood of Virginia Beach, Va. on June 1, 2019.

Elsewhere Saturday night, dozens of people gathered at Grace Covenant Presbyterian Church, where pastors from area churches encouraged community members to unite as they faced down the pain and anger that often follows this type of violence.

As the service approached its close, worshipers lit candles and stood silently, listening as the name of each victim was read aloud followed by the toll of a bell. They then raised their candles in unison while singing “Amazing Grace.”

Jasmine Patterson who attended said she has spent much of her life in Virginia Beach.

“Because it’s literally right here, I was very upset,” she said. “I couldn’t process what was happening.”

But it meant a lot, she said, to attend a vigil so that she could stand in solidarity with the victims’ families and honor their loved ones.

Earlier, people gathered Saturday morning outside a movie theater at a shopping complex. The setting wasn’t traditionally spiritual, but dozens of people arrived in the rain. Some even fell to their knees.

Parents showed up with their children. Many trucks bearing American flags were parked in the nearby lot. And Virginia Gov. Ralph Northam made an appearance.

Northam said to pray, not just for the victims, but also for first responders to Friday’s violence because they too are grieving.

A few people wearing clothing emblazoned with city office logos also attended the rally though they were reluctant to speak to reporters on scene.

At the Grace Covenant gathering, Maggie Connelly said she felt it was important to attend to show those whose lives had been affected that their community was stepping up to support them.

“We consider ourselves a family,” she said. 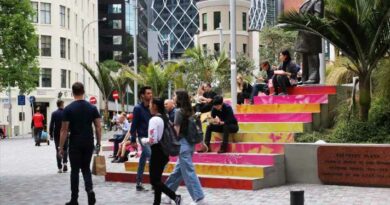