Since Whitney Houston died in 2012, her estate has been pitched every kind of entertainment deal, from jukebox musicals to a traveling museum.

Pat Houston, the executor, has turned them all down.

But now the estate is open for business. It has lined up an extensive list of potential projects — including a touring hologram, a possible Broadway musical, branding deals and an album of unreleased tracks — intended to awaken the commercial potential of a dormant megacelebrity brand.

“Everything is about timing for me,” Pat Houston, the performer’s sister-in-law and former manager, said in an interview. “It’s been quite emotional for the past seven years. But now it’s about being strategic.”

Last week, the estate signed a deal with Primary Wave Music Publishing, a boutique music and marketing company in New York, to rebuild Whitney Houston’s business. As part of the agreement, Primary Wave will acquire 50 percent of the estate’s assets, which include the singer’s royalties from music and film, merchandising, and the right to exploit her name and likeness. The deal values the estate at $14 million, according to two people familiar with the arrangement.

At her peak, Ms. Houston was a pop-culture juggernaut, with a golden voice and fashion-model looks. She had 11 No. 1 hits, sold tens of millions of albums around the world, and with the blockbuster 1992 film “The Bodyguard” joined an elite category of stars with equal success in music and the movies.

But to some extent, the estate is looking to resuscitate her reputation.

When she died at age 48 in Beverly Hills, Calif., Ms. Houston’s career as a hitmaker was long behind her, and a public struggle with drugs had made her a tabloid fixture. A documentary last year, “Whitney,” which was authorized by the estate, looked unflinchingly at her downfall, and included the accusation that she had been molested as a child.

“Before she passed, there was so much negativity around the name; it wasn’t about the music anymore,” Pat Houston said over lunch recently, before heading to Primary Wave’s office to listen to some unreleased music. “People had forgotten how great she was. They let all the personal things about her life outweigh why they fell in love with her in the first place.”

As Larry Mestel, Primary Wave’s founder, put it, “Whitney was America’s sweetheart, and the idea now is to remind people that that is what her legacy is.”

Mr. Mestel said he was already in discussions with Broadway producers about a musical and a Vegas-style spectacle. Unused tracks from her 1985 debut album, “Whitney Houston,” are likely to be part of a new album.

To do that, the estate and Primary Wave — which specializes in marketing classic song catalogs — would need to work with Sony, which owns Ms. Houston’s recordings.

The estate’s first project is the hologram, which would join a growing list of laser-generated posthumous singers who have gone on tour, including Maria Callas, Roy Orbison and Frank Zappa. The Whitney hologram, already under development, will perform hits like “I Wanna Dance With Somebody (Who Loves Me)” and “The Greatest Love of All” backed by her original band and backup singers — including her brother Gary, Pat Houston’s husband. 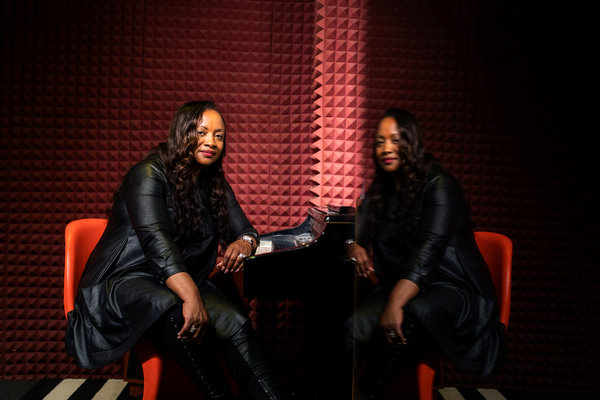 “The hologram has taken precedence over everything,” Pat Houston said.

Pat Houston, the sole executor of the estate — whose beneficiaries are Whitney Houston’s mother, the gospel singer Cissy Houston, and her two brothers, Gary and Michael — has had a long association with her sister-in-law’s business, having managed her career since the early 2000s. And she knows the kinds of details that only family members were privy to: Whitney didn’t want to be on the Hollywood Walk of Fame, Pat said, because “she didn’t want people walking on her name.”

She also sought to correct what she called popular misconceptions about the state of Ms. Houston’s finances upon her death. “She had money when she died,” Pat Houston said. “It wasn’t multimillions, like everyone thought, but she wasn’t broke.”

The agreement with the Houston estate is the latest in a series of deals by Primary Wave, which was founded in 2006 and has focused on older artists with platinum names, like Smokey Robinson, Def Leppard, Paul Anka and Kenny Loggins. It recently raised $500 million to finance new acquisitions, Mr. Mestel said. He would not disclose who the investors were, but The New York Times confirmed that they include large asset managers and at least one state pension fund.

Streaming has lifted the value of classic catalogs and led to bidding wars that have pushed prices ever higher, as outside investors look to park their money in so-called alternative assets — ones, like music royalties, that don’t fit typical investment categories like equities or real estate. Primary Wave’s angle has been to promote its clients through branding and entertainment deals, many of which it develops in-house.

For Bob Marley’s catalog, which it acquired last year, Primary Wave is working with the production company FiveCurrents on a live show; for Mr. Robinson, who turns 80 next year, it has a deal with Shinola for a line of Smokey Robinson-branded watches. The value, Mr. Mestel said, lies in the steady popularity of “iconic” names and songs, and he threw shade at deals that rely heavily on current hits.

“I find it strange that our competitors are spending big money on relatively new song catalogs,” he said. “Their earnings will only decline as their songs come off the radio.”

One of the company’s more surprising deals, in 2017, was for the estate of Glenn Gould, the Canadian classical pianist. Since his death in 1982, Gould’s catalog of Bach and other recordings has been frequently reissued and repackaged by Sony. To further promote him, Primary Wave is working on a hologram tour set to open next year — a choice that drew criticism, since Gould famously hated playing concerts.

“They were clearly empathetic of my objectives for the estate, and for holding true to Gould’s values,” he said, “and still looking to exploit and find ways of maximizing the legacy of Glenn Gould.”

In her heyday, Ms. Houston sang in commercials for Diet Coke and AT&T, but mostly avoided lending her name or face to products. That may change as Primary Wave pursues new deals, but Mr. Mestel said a line had already been drawn at what was appropriate.

“For Whitney Houston, who had an elegant voice and an elegant way about her, we wouldn’t do a fast-food brand relationship, for example,” he said.

As an example of the memories that she wants to conjure, Pat Houston recalled first going on tour with her sister-in-law two decades ago.

“I watched a woman go onstage,” she said, “and was just absolutely flawless.”

The economic numbers are continuing to defy the recession hype