Home » Business » Why Wistron vandalism is bad for India

‘The workers’s dance of wilful destruction has the potential to kill all investments planned in India by any foreign entity,’ argues Dr Sudhir Bisht.

The instance of vandalism by employees at Wistron’s iPhone manufacturing facility at Kolar in Karnataka is very disconcerting, to say the least.

On December 12 many workers of the plant ransacked the plant and it is estimated that the Wistron plant suffered damages worth over $60 million (Rs 432 crores/Rs 4.32 billion)

Wistron itself is an excellent company that had an annual turnover of $30 billion in 2019. The Taiwan headquartered company is reputed to be one of the best technical services provider companies in the world. It is the main equipment supplier to Apple and has been manufacturing iPhones in India for the past four years.

A report in The Hindu says Wistron proposed to increase its investment in India from Rs 682 crores ($494 million) to Rs 1,947 crores ($270 million) in the near future.

The Wistron investment may be just about 0.5% of the $49.97 billion foreign direct investment that India received in FY 2019-2020 but the fact is that the smooth functioning of the iPhone manufacturing plant is cited as one of the prime success stories of the Aatmanirbhar Bharat that India is aspiring to become.

The acts of ransack and pillage by the workers have cast a very negative and even dangerous image of the Indian workforce. It underpins the image of our workforce being undisciplined, unruly and disruptive.

The Kolar episode has further dented India’s image in the world.

Can Prime Minister Modi’s vision of making India a manufacturing hub ever succeed if workers of one of the most sophisticated plants in the world, despoil their source of livelihood?

This leads us to the question, why did the workers bite the very hand that feeds them?

The workers committed a dreadful crime last Saturday. Their dance of wilful destruction has the potential to kill all investments planned in India by any foreign entity. The workers have brought notoriety and shame to an entire nation.

So what exactly happened at Wistron’s Kolar factory?

As per media reports, the vandalism took place as the Wistron workers were not happy at being denied their rightful overtime compensation.

Some point out that this was because of delay in salary payment of one or two days. Some say that the workers were unhappy that their payment for overtime was less than what was allowed under the law.

The important point is that the protesting workers were not on the payroll of Wistron, but contract workers, another name for third party employees.

Is there a pattern in this?

What does it mean to be on the rolls of a third party vendor?

Six very reputed manpower solutions companies — Randstad, Quess Corp, Innovsource, Creative Engineers, Innovsource & Adeco Group — have partnered with Wistron to help them hire 9,000 employees, out of which about only 1,343 were absorbed as Wistron employees, reports the Economic Times. The rest — 8,490 — were contract employees on the payroll of one of the six manpower solution companies.

An employee on the payroll of one of the manpower companies may never have been inside its office. He goes to the Wistron factory at the start of the shift, works there for 48 hours a week, makes the iPhone for Wistron and eats at their canteen. He may even travel by the bus service provided by Wistron, but he is not an employee of Wistron.

Most companies, especially the foreign ones, are wary of hiring employees directly as they are given the impression that the multiple labour laws make it a formidable challenge to comply with.

Foreign companies have this culture of work contracts and they can lay off workers based upon the contract agreements.

The first thing the foreign companies do upon coming to India is to contact an HR advisory firm that instils this fear in their minds that the only way to manage the labour problem in India is to outsource all workforce to the manpower solution firms.

I am sure that a reputed manpower company does not indulge in unfair labour practice to make profits at the expense of workers.

My sense is that Wistron has been very wrongly advised to outsource more than 90% of its workforce to other companies.

It is understandable if a huge manufacturing plant uses third parties to hire men and women for the work that is not the plant’s core work.

So factories and other establishments hire third party employees for carrying out non-core activities like gardening, housekeeping and work at the office canteen. This is understandable as these are not the functions that the company excels in.

In many cases, these jobs may be part-time jobs and even seasonal jobs and it makes sense to outsource these jobs.

However, to outsource the core jobs as that of machinists or operators or technicians to third parties is very wrong. The latter just add to clients’s cost as they have a 8%-10% mark-up on the wages the clients pay to the workers.

The workers resent not being the direct staff of Wistron as being third party staff makes them a lesser person in the social order.

An engineer working for Airtel or Jio is often asked this question if s/he is on the payroll of the company or not. A person who works directly for the principal company has more value in the matrimonial as well as in the job market.

The third party employees of Wistron would not have behaved the way they did if they were employees of Wistron. I suspect that if there was indeed any delay in payment of their salaries or in under-calculating of their overtime, their employer (manpower solutions company) should have handled the situation by talking to Wistron.

The likely scenario that I imagine is that the workers may have spoken about their issues to the Wistron management, which in turn would have told them that they should talk to the manpower company.

When the workers approached their official employer, its representative would have just shrugged his shoulders and said, ‘Go, talk to the Wistron guys. If they pay us, we will pay you the next day.’

Frustrated at being pushed around the workers resorted to the protest. At some point in time, outside elements like a local politician or a disgruntled employee or may be a business rival provoked a small act of vandalism. The pent up feelings broke open and the factory was stripped. This is my simplistic narrative. 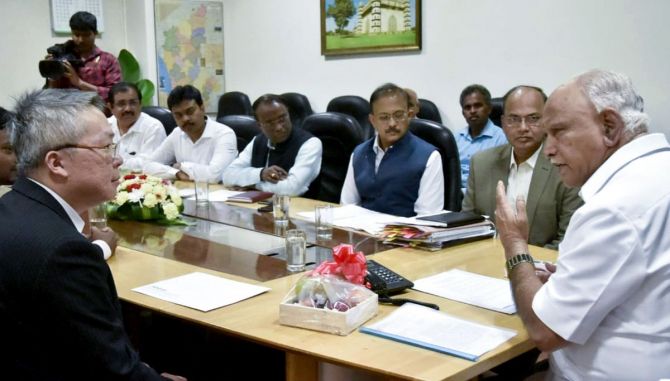 What are the lessons for all sides?

The first lesson is for the workers of Wistron. What they did was unforgivable and they must be prepared to face the full force of the law.

The workers must choose between no employment and some form of employment. They must show respect for the company that puts food on their table.

The workers must come forward and share the names of those who indulged in vandalism so that the law can punish them.

The workers must also know that in a competitive world, delay in salaries is not something that is unexpected. Also, overtime calculation is an issue that has some ambiguity and workers and management must sit together to sort out the issue.

The second lesson is for Wistron.

It is a fact that under the law the principal employer (Wistron) is finally responsible for all statutory compliances.

If Wistron doesn’t pay salaries to the external employees on time, the service providers (read, the six companies named above) will do absolutely nothing. They will just point fingers towards the Wistron HR head.

The service providers just collect 8% to 10% margin over and above all costs it incurs on paying these employees. They have nothing at stake, absolutely nothing.

I urge Wistron to revisit its HR policy of being overly dependent on the service providers. I am not asking Wistron to start insourcing their canteen staff, I am only pleading for insourcing of employees who are working in the regular manufacturing processes.

If Wistron claims, and rightly so, that it is one of the best TSPs, then it must be the best in the business of manufacturing, sourcing, operations, finance and HR. One of the functions of HR that seems to have lost its sheen is industrial relations. An amiable IR climate can help a company achieve greatness.

Wistron cannot be a good manufacturing company if the people who assemble their iPhones are not its own staff. There is no difference between Wistron hiring them directly or indirectly. With good HR/IR teams in place, Wistron’s productivity will increase if they insource the technical staff.

Also, laying off staff is not so much of a problem in India, should a need for that arise in future. Many telecom companies in India, including Reliance Infocomm, Nokia and Ericsson, have restructured their labour force without facing any hitch.

If the intentions are not ignoble and communication is transparent, the workforce adjusts to new realities quickly.

It also makes sense to have your own people doing your core jobs. A detailed calculation would reveal that insourcing actually brings down the costs as longer the chain, greater the expense.

Apple outsourcing manufacturing to Wistron and Wistron outsourcing primary labour to a third party makes the chain longer and cumbersome,

Who knows that the third party could end up engaging a fourth party for supply of manpower? Longer your chain, lesser is your control over your processes.

I also take this opportunity to ask Wistron to check if any liability exists on its manpower supplier companies for the loss that its plant suffered due to the vandalism of the employees of these companies.

This is very important. The labour suppliers make profits from the hard work of their workforce. They should also be responsible for their misdeeds.

The third lesson is for the leaders of our country. The labour laws need further simplification. State and Union governments must set up a task force that would harmonise the multiple labour laws in the country.

The employers should be allowed to engage with workers on an annual contract basis and no employment should be deemed to be for perpetuity.

It is also the sanctified duty of the leaders of each state to ensure that those who commit the acts of incineration, loot and plunder at industrial establishments are dealt with strictly.

Why should we not use brute force to quell the plundering of a private industrial establishment?

Why should we be a soft State that cannot deal with its criminals who disguise themselves as workers?

What happened at Kolar is shocking; this cannot happen in Malaysia, Vietnam or Thailand.

India cannot hope to compete with China that has a labour force that is highly disciplined and even more highly regulated.

Closing down factories if they are not sustainable should be a quick and pain-free process if we are to achieve our dream of Aatmanirbhar Bharat,

The last lesson is for the citizens of our country. We have to look inwards and decide that enough is enough.

We must protest against the rampaging workers at the Wistron factory at Kolar. We must campaign for very harsh punishment for these rioters.

As the Summer Heats Up, the Economy Cools Down