ARK has recently optimized their core model, providing users with behind the scenes details of their recent progress. The new platform has been well designed and has the efficiency set to the maximum, and ARK are now giving users an insight into their recent project ARK Core v2. It was a necessity to undergo changes to prepare for the next generation of DPoS Blockchains.

The original ARK Crypti/Lisk legacy code that the project used from the beginning has recently been scrapped, as the team has had ideas of their own build. The work from Ark’s Contract Execution Services (ACES) and ARK’s internal system has shown that the original code had not been fully adapted to the needs of the platform which required maintenance.

ARK’s began their journey in fall of 2017, when the company decided to rewrite the ARK core from scratch. The ARK team is proud to announce that they are very close to releasing the beta project onto DevNet for public testing. The all new ARK Core V2 will be native to Windows, Linux and Mac. It will have a very simple single command line install with a conponentable (Relay Node, Forger, Transaction Pool, Storage, Public API, P2P API, option for your own components.) It will have no need for snapshots.

The single layer forging process will run behind a firewall, and the programmable state machine will incorporate an auditing API. ARK Core V2 will see the implementation of AIP11 (Protocol serialisation) AIP14 (versioned restful API) and AIP15 (WebHooks), Multi Processor Capabilities (separate CPUs for Node, Transaction Pool and Forger processes), and Fast Rebuild using SPV (with automatic switch to do a full rebuild, when close to the top of the block).

Additionally using the BIP38 encryption of delegate passphrase in config file with One Time Password (OTP) encryption in RAM or security purposes, ARK will be using a rotating compression log, and constants in config, with progressive fork rules, to ease the configuration of deployable ARKchains. Support for various databases (MySQL, PostgreSQL, SQLite3, MsSQL) will also be implemented. With 100% Compatibility with V1 protocol and dynamic fees, ARK Core V2 is sure to stand out.

Once the ARK Core V2 Blockchain is downloaded (assuming it has not been corrupted in any way), It will be able to complete a rebuild in a little over 1 minute for mainnet on a Macbook Pro. So now each time you restart your node, the script performs a rebuild so processes can be safely synced back to the network. ARK are working to improve this rebuild to make a complete Blockchain audit detecting any corruption. ARK is confident that this platform will fit the needs of anyone wanting to deploy a DPoS blockchain, being the best choice around and that the platform is ready for mass adoption.

ARK’s focus aims to offers a wide spectrum of solutions, using smart blockchain ecosystem that is an adaptable and scalable platform which will provide users with the easiest and most accessible service that technology has to offer. Creation to be adaptable for a mass audience on a global level. 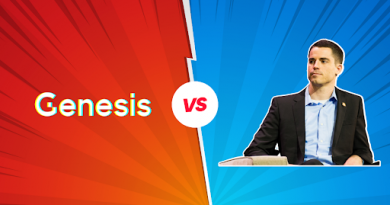 Genesis vs. “Bitcoin Jesus” Roger Ver: All You Need To Know About The $20M Lawsuit – Coinpedia Fintech News

Cryptosecure: There is No Bad John McAfee Publicity