It seems most of the cryptocurrency markets are slowly making up some of the lost value as of right now. With the weekend almost upon us, it is evident there will be some intriguing momentum to keep tabs on. Right now, it seems the Bitcoin Cash price will rise above $1,000 again very soon. That is, assuming the momentum doesn’t turn around again in the near future.

It has been a pretty troublesome start to 2018 for all cryptocurrencies so far. None of the top 15 coins have reached and sustained any, major gains for longer than an hour or two. Whether or not this trend will eventually reverse course, remains to be determined. As of right now, it seems highly unlikely anything good will happen in the coming weeks. For the Bitcoin Cash price, the current struggle comes in the form of reaching $1,000 again.

To put this into perspective, we are currently looking at a Bitcoin Cash price of $984.5. That in itself is pretty decent, although most supporters would love to see BCH surpass $1,000 again. If this current trend keeps up, it is possible, we will see that kind of value later today. At the same time, all of these markets remain extremely volatile, and the positive moment can turn sour pretty quickly.

Whether or not we will see a Bitcoin Cash price of over $1,000 later today, is difficult to answer. Right now, Bitcoin Cash is still down by 2.46% compared to 24 hours. It is not a huge loss, but it is this percentile which makes the difference between $1,000 and just missing the cutoff. The positive note is how BCH is gaining 0.48% over Bitcoin, which can only be considered to be a good thing for supporters of this altcoin.

With $327.46m in 24-hour trading volume, it is evident Bitcoin Cash still has a long way to go until things can start to look up again. As all markets see less trading volume, this trend for BCH is not entirely surprising or disconcerting. The bigger question is whether or not we should expect any big changes in this regard anytime soon. The overall trading volume has been stuck below $20bn for quite some time now, and the issue is not going away.

Looking for the exchanges ranked by Bitcoin Cash trading volume, OKEx is clearly in charge as of right now. Its BTC and USDT trading pairs are generating over 30% of all trades, which is pretty interesting to keep an eye on. Huobi comes in third place, although it seems unlikely the exchange can ever catch up with OKEx in this regard.

For the time being, we have to wait and see what the future holds for the Bitcoin Cash price. The current trend seems to indicate hitting at least $1,000 should be possible today, but the cryptocurrency markets always remain unpredictable first and foremost. This is also what makes cryptocurrency so intriguing, even though long-term holders will hope this bearish momentum wears off fairly soon.

Facebook Debacle Raises Questions About How Blockchain Could Address Such Events 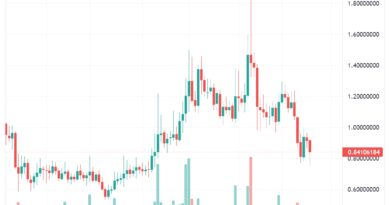