After a strong pullback on Wednesday morning, decentralized finance (DeFi) coins are once again rocketing higher. Top coins pertaining to the space have gained dozens of percent in the past day, becoming the top-performing crypto assets in the top 100 by market capitalization.

Bitcoin is basically flat over the past day as it attempts to consolidate between $17,000 and $18,500. BTC continuing to consolidate may allow altcoins to rally further as attention naturally shifts to coins that can make investors more money in the interim, altcoins.

Top DeFi coins are surging dozens of percent amid a shift from Ethereum to altcoins further down the risk curve.

SushiSwap’s SUSHI is up 40% in the past 24 hours, pushing to multi-week highs. The coin is benefiting from a shift in liquidity from Uniswap, its primary competitor and the protocol from which it is derived, to its platform due to incentives. SushiSwap developers are also soon expected to release a number of products, such as a lending service for users, leveraged trading, and limit orders to improve the user experience.

SUSHI was largely underpriced in September and October as investors thought Uniswap would decisively maintain its market share. But with governance concerns and a wider DeFi bear market, Uniswap liquidity slipped, as did volume to some extent.

Yearn.finance’s YFI is up 25% in the past 24 hours, making it the second top-performing coin in the top 100 by market capitalization.

Yearn.finance, like SushiSwap, is undergoing technological upgrades that should boost the price of its native token moving forward.

Other coins such as Curve DAO Token, Uniswap, THORCHain, Waves, Synthetix Network Token, and more are up over a dozen percent in the past day.

Despite the strong rally in DeFi coins, Ethereum isn’t really budging. The coin is up 0.7% in the past 24 hours, despite some arguing that holding the coin is actually a proxy bet on all of decentralized finance.

Analysts still expect the coin to move higher in the weeks ahead in the mid-$400s. Referencing the chart seen below, one analyst said:

“Has not even started its parabolic run like BTC yet, still huge room for upside over the coming few weeks, also major macro support is just below just limits downside risk. Still incredibly bullish across all timeframes.”

ETH is also likely to benefit from the launch of Ethereum 2.0 in December or January. 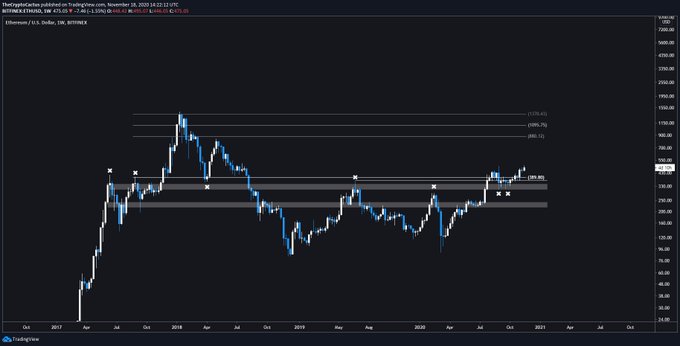