The threat of a trade war poses risks to what is an otherwise robust growth picture, Cleveland Fed President Loretta Mester said Monday.

Despite the “uncertainty” risks from White House tariffs on steel and aluminum and punitive measures taken against China, Mester said she remains optimistic about the economy.

“This uncertainty may not be resolved quickly,” Mester said during a speech in Princeton, New Jersey. “Assessing the impact on the U.S. macroeconomy will ultimately depend on how other countries react, including whether they impose their own tariffs or other trade barriers in response.”

Indeed, President Donald Trump’s tariffs have injected uncertainty not only in the global trade picture but also financial markets. Stocks have been volatile lately, with Monday trading showing a sharp rebound from a Friday plunge.

That, however, comes amid what Mester described as a strong global backdrop.

“For the first time in many years, economic activity around the world is picking up and forecasts for global growth are being revised up,” she said. “This should have a positive feedback effect on the U.S. economy via exports.”

In addition, aggressive fiscal policy in the form of tax cuts and increased spending likely will head 0.5 percentage points annually to growth over the next several years, she said.

The Federal Open Market Committee, which sets monetary policy for the central bank, last week approved a quarter-point interest rate hike, citing good prospects for growth. Mester said she agreed with the decision, though she did not commit to a path ahead.

“It seems appropriate to remove some of the monetary policy accommodation to ensure we avoid a build-up in risks to macroeconomic stability that could arise if the economy were allowed to overheat,” she said.

The Fed’s target rate is now between 1.5 percent and 1.75 percent. The FOMC is expected to approve at least two more rate hikes in 2018. 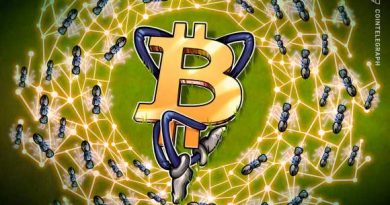 Bitcoin mints more than 13,000 'wholecoiners' in the past seven days