Today the crypto world is celebrating Bitcoin’s new all-time high. We did it guys! We’re back to $20,000 after three grueling years.

So for this reason, this will be a bit of a Bitcoin-themed newsletter. How is Bitcoin related to DeFi, you ask? Well, for one thing, DeFi’s total value locked has a delta of about 0.2 to Bitcoin’s price. This means that for each 1% that BTC price goes higher or lower, DeFi TVL changes by 0.2%. 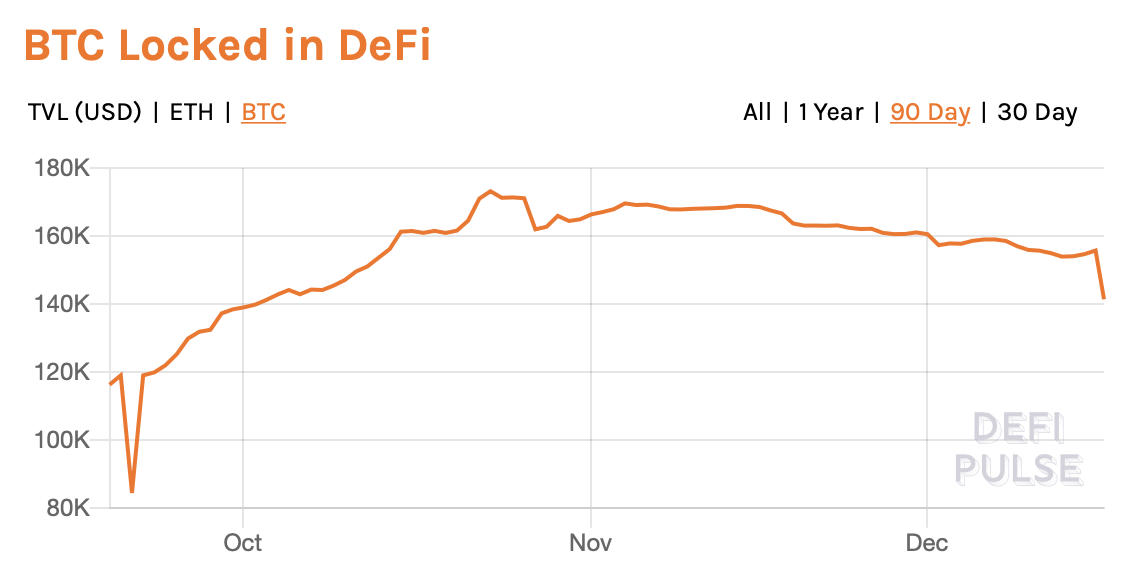 Most of that relationship is due to the peculiar accounting choice of considering BitGo’s Wrapped BTC as its own asset in DeFi, while also counting all instances where WBTC is used in DeFi protocols. From a “natural” worth of $535 million, Bitcoin’s contribution to total value locked jumps to $2.9 billion — a pretty major discrepancy, right?

But beyond Bitcoin’s use on Ethereum, there is also the phenomenon of Bitcoin DeFi. Now, the thing is that none of these are really “Bitcoin” DeFi, because Bitcoin just does not let you create the complex smart contracts needed to implement true DeFi. The only project I know of that sort of does that is Atomic Loans. You pledge Bitcoin natively, but all smart contracts are on Ethereum and your loan is disbursed there.

Bitcoin DeFi does exist on RSK and Liquid, two Bitcoin “sidechains” — separate blockchains that use Bitcoin as their native currency. RSK also uses merge mining to validate its own chain, resulting in a much tighter bond with the main chain.

The problem is of course that since Bitcoin doesn’t have smart contracts, the path for BTC to reach those “DeFi” sidechains is usually custodial and centralized. But we recently saw RSK push a solution that makes the bridge effectively trustless, so I’m starting to warm up to seeing it as two sides of the same Bitcoin.

RSK has definitely been active on the DeFi front. This week, Sovryn launched its DeFi suite on RSK. It’s a mix of several building blocks, including a lending protocol and an automated market maker exchange, or AMM. Similar to bZX’s Fulcrum, the combined suite makes it easier to enter leveraged positions on Bitcoin without taking the manual steps you’d have to take on, say, Compound.

Among the more interesting protocols on RSK we have TEX, a sort of mix between an AMM and an order book exchange. The mechanism is complex, but essentially it settles orders every few minutes based on an average of all limit orders submitted. The exchange was launched by Dollar on Chain, RSK’s Maker analog with a few additional features.

On the Liquid side — the sidechain developed by Blockstream — there is less variety, although there is another interesting twist on decentralized exchanges called TDEX. It uses atomic swaps to perform trades and allows complete control over settlement price, unlike AMMs, where you don’t really know your trade’s price until the order is executed.

The most popular type of Bitcoin on Ethereum is Wrapped Bitcoin, as I’ve mentioned. Quite simply, BitGo (and supposedly other partners) takes custody of Bitcoin that’s bridged to Ethereum, and then they mint the corresponding WBTC tokens. Very similar to Tether or other centralized stablecoins, it feels like a cop out.

For tokenized Bitcoin to be relevant, we need to solve this pesky issue of relying on custodians to bridge it to new chains.

The tBTC project is one such trustless Bitcoin bridging mechanism. The project really embodies the “make lemonade” principle to its fullest. To avoid Bitcoin’s smart contract limitations, it allows anyone to become a “bonding agent” tasked with performing the conversions between Bitcoin and Ethereum. In case of any wrongdoing, users have a claim to the agent’s bond on Ethereum, which is overcollateralized when compared to the bridged amount.

As you may expect, tBTC’s mechanism of bonds and slashing is quite complex and is probably stifling adoption, so this week tBTC partnered with the CoinList exchange to provide an easier method for minting the token. That may also be interpreted as a cop out, but the fundamental feature is that the system is still open to anyone, instead of being operated by an exclusive and well-defined set of validators.

Lastly, there is RenBTC. While the team uses fancy words like “Shamir’s Secret Sharing” and “Multi Party Computation” to justify itself as a trustless and permissionless bridging protocol, research by Wanchain seems to show that all BTC in their bridge is held by a single wallet, presumably controlled by the team. Wanchain is a competitor, so make of this what you will — I don’t really have the expertise to corroborate this quickly.

In practice, Ren is definitely simple and permissionless enough. So much so that DeFi hackers have now turned to it to launder their proceeds. The most likely explanation I see is that the Bitcoin blockchain is just much harder to track, and mixing solutions are much more liquid on it than Ethereum’s Tornado Cash.

If Ren is really as centralized as it seems, I could foresee major problems if the team continues letting hackers use it. The general rule of financial regulation is that if you can stop money laundering, you must — in a very vigorous and proactive way. Still, individual instances of money laundering are not a big deal, provided there is an acceptable anti-money laundering program.

Overall, Bitcoin may become the most promising expansion avenue for DeFi. You just can’t argue with its $383 billion market capitalization. Whether it’s on Ethereum, on Bitcoin sidechains or anywhere else, DeFi would be a natural extension for Bitcoin as an asset.

China Regulator to Retain Control of CEFC Brokerage Until 2020