Billionaire investor, Bitcoin bull, and founder of crypto merchant bank Galaxy Digital Holdings Ltd. Mike Novogratz is the latest member of the crypto community to jump on the asset tokenization bandwagon. Asset tokenization is the practice of taking “real-world” assets, such as gold and real estate, and tying their ownership rights to cryptocoins so that they can be easily tracked and traded.

It’s Been a “Crappy Bear Market”, But Technology is Moving Forward 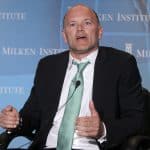 Indeed, the practice is becoming more popular. A growing number of platforms are offering tokenization services; platforms are being built specifically to assign buildings with their own tokens. “Such coins let investors get out of their investments by selling their shares any time through exchanges instead of holding on to them for years,” a Bloomberg report explained.

Novogratz added that while “it feels like a crappy bear market, and it has been in coins,” these technological advances should be viewed as positive industry progress, and that “you’re going to see more and more of” companies tokenizing real estate and other assets. “It’s not nearly as sexy as Web 3.0,” he conceded, “but it’s a part of this broader movement of tokenization, digitalization in blockchain and the blockchain makes a lot possible.”

According to Bloomberg, Galaxy Digital has hired Ian Taylor, an investment banker from Goldman Sachs Group Inc. who worked in real estate to develop and run what will eventually be fully-functioning real estate tokenization platform. Taylor will officially join the company before the end of this year.

NewsBTC to Make Splash at London Summit 2018Go to article >>

Mike Novogratz is one of the cryptoshere’s most well-known Bitcoin bulls and price predictors. Near the end of 2017, Novogratz’ price predictions came true, one after another, as the price of Bitcoin continued to climb. However, he didn’t seem to see the crash at the beginning of this year coming; at the end of November 2017, he predicted that BTC could “easily” break $40,000 in 2018.

Now, Novogratz’ price predictions are a little more modest. Recently, he expressed that he doesn’t believe that BTC will surpass $9,000 before the end of this year. This is perhaps in part due to the fact that galaxy Digital reported a $134 million loss during its first quarter.