Bitcoin Cash now has its own professional track sung by Lil Windex, a popular rapper whose previous songs attracted million of views.

“This song may be serious or it may be parody, I really don’t care because it’s glorious,” says Mashable after adding “I don’t really understand a word of it but it’s still terrific.”

The three minutes story line of Bitcoin Ca$sh describes a rags to riches, from a windows cleaner to a mansion owner, all thanks to BCH.

It’s easy to listen to, and some parts are catchy, with Windex’s voice giving it quite a fines. But we’re not fans of the get rich quick message, and we’re somewhat conflicted about the ending, where he says:

“Hey fuck Bitcoin Core. You’re just a buncha names. We the BCH gang. We run this game. So before you start talking just consider the fact that we’re the real money makers. We got millions in cash. And bitch we: strive for success/ we’re defined as the best/ and if you want your/ life to be blessed/ then come on by and invest/ just like I did/ and now my wife’s breasts/ have doubled in size on her chest/ Rrrrikikiki/ Ya [inaudible] motherfucker. BCH gang!”

On the one hand, channeling that through music might not be a bad idea. On the other hand, one would have hoped that after three years of debating, they’d get over it and move on. But that might take some more time it seems, if they can ever put it to rest.

Windex himself is a Bitcoin Cash holder, receiving almost one BCH in tips after he confirmed a QR code in the video was his address:

He, therefore, has some familiarity with crypto and chose Bitcoin Cash because “Bitcoin core is basically going against Satoshi’s original vision.”

“I’m not an expert, but from what I’ve read, Bitcoin core is backed by special interests and haven’t listened to desires of the crypto community. That’s whacksauce,” he says.

It’s quite a bit more complicated than that, but his target audience is individuals who are unfamiliar with crypto, so spending a segment in his video to explain mining.

He is therefore keeping it simple, with the lyrics so being somewhat superficial and “fun,” just as his audience presumably likes them.

As such, it’s not quite Muse singing “Resistance” or “Uprising.” Which makes it very different from another highly professional song that somehow has gone under the radar for all these years even though it was played at DevCon in 2013.

The Bitcoin Baron forces you to dance to some spirited lyrics, with its slow start giving way to ones with the song, which at one point dives into such rhymey lyrics that you just have to get up and lose yourself to dance.

Different styles, certainly different audiences, but crypto is now on the verge of entering the cultural mainstream as artists become familiar and gain inspiration.

Yet they’ll have to work very hard to top the Bitcoin Baron, or the somewhat less original in music, but fully original in lyrics, Cyprus Anthem. 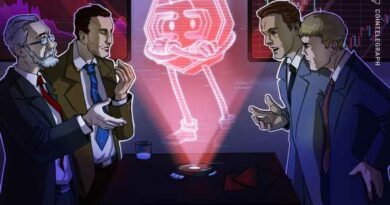 Terra peg mechanism in doubt as UST crashes to 67 cents 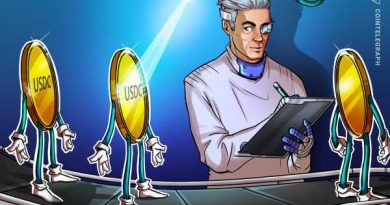