Stablecoin issuer Tether (USDT) has sponsored the development of a new version Omni, a platform for creating and trading custom digital assets and currencies on top of the Bitcoin protocol, according to a Medium post by Omni Lab.

The newest version of the platform, which has been labeled as Omni Core 0.7.0, includes “major updates” such as “much faster indexing of transactions and the update to the decentralized exchange.”

Regarding the latter, the post says that “with the 0.7.0 update Omni Core and the forthcoming Omniwallet interface update, the team would finally like to open up the primary decentralized exchange to work between BTC and any Omni Layer token directly on the Bitcoin blockchain.”

Omni is where Tether originated, but USDT has also been distributed on EOS, Liquid, Ethereum, and Tron

Notably, Omni is the first network that hosted the first USDT tokens. However, Paolo Ardoino, CTO of Tether, said in a press release that was sent to CoinTelegraph that although “Omni Core is highly valued and demonstrates good levels of security,” Tether has made an effort to spread itself over a variety of protocols.

“It is important to note that Tether is underpinned by diversity in different blockchains, of which Omni Core has proven to be an important component,” Ardoino explained.

At press time, there was $1.55 billion USDT authorized for circulation on Omni; $2.2 were authorized on Ethereum, $916 million on Tron, $5.25 million on EOS, and $1.56 million on Liquid. CoinTelegraph tweeted on December 13th that “While holding USDT, you must remember that…on the Omni and EOS blockchains, Tether can freeze owners’ tokens.” 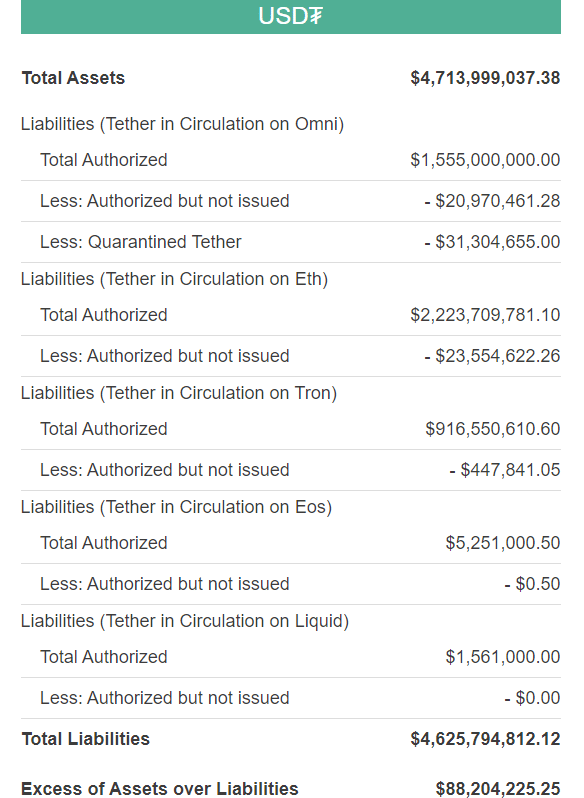 Last week, Tether tweeted that it had “moved 220m Tether USDt as part of its Omni authorized but not issue pool to the issuance address in preparation to burn/revoke them (sic).” However, BeInCrypto reported that “the move appears to be not fresh money but instead a chain swap that is being facilitated through Binance.”

Tether and Bitfinex continue in court against NYAG Letitia James

Tether, along with sister company Bitfinex, is currently embroiled in a court battle with New York Attorney General (NYAG) Letitia James. The case is being fought over an alleged accounting coverup in which Bitfinex is alleged to have improperly borrowed $625 million from Tether’s reserves to cover a shortfall in its liquidity.

Both companies have made an effort to try and halt the NYAG’s proceedings. However, James wrote in a filing published late last week that she found the attempts to end the court battle to be “perverse”:

“It is particularly perverse for respondents to criticize the adequacy of [the Office of the Attorney General’s] potential legal claims when respondents are the ones who have refused to disclose documents and information that would be directly relevant to their liability,” James wrote.