According to a group of researchers, cryptocurrency users are a bunch of free-loaders.

Well, maybe they wouldn’t go that far, but they argue users aren’t paying for certain data they should be paying for, and in turn, are putting the growth of blockchain networks at risk.

At least that’s the finding put forth by a new paper that outlines a system for how higher fees could be charged based on the amount of data users need to store on a blockchain and the amount of time their data needs to be stored.

It’s a controversial finding since rising transaction fees have set many cryptocurrency communities into infighting as various stakeholders debate the solutions for scaling blockchains and pushing fees down.

For instance, bitcoin’s notorious scaling debate many times circled around growing transaction fees, which hit an average of $52 at their highest but have since fallen significantly to $1.30, according to BitInfoCharts.

“Miners are judging fees on bitcoin for bandwidth consumption, so for transaction size, and that’s it. The idea of our research is we have few a different things we need to charge for.”

Indeed, because of the way transaction fees are decided in most cryptocurrencies today, Chepurnoy said, users are incentivized to overuse some data, making blockchain full node software grow and become more cumbersome to spin up and run – which he argues is a bad thing, since full nodes are the most secure way to interact with the bitcoin network.

The pool of data tracking who owns which cryptocurrency is called “state,” and this is the data the researchers propose users pay for. (State is typically stored in a special corner of computers called RAM, a type of storage that allows for the easy retrieval of the data, but it also makes that data more expensive to store.)

Blockchain states tend to grow larger and larger over the years as more people adopt these systems and use them more for transacting. Bitcoin’s state, for example, has increased by about five times since 2014, while ethereum’s is growing even faster.

But by slapping a fee on this data storage, Chepurnoy’s hope is that users will be more cognizant of only storing what data is a must, in turn, shrinking the rate at which the state grows.

At least, easier to use in their most secure form – by running a full node.

As mentioned previously, this becomes an issue as adoption and the number of transactions increases. Already, it can take anywhere from a few days to weeks to get a bitcoin full node up and running, and the size of the state takes up roughly the amount of data a normal laptop holds.

And this isn’t just a problem for bitcoin, ethereum’s state is about three times as big.

Chepurnoy sees these fees as an “economic solution” to “unreasonable” data growth, slashing transaction data would make it easier to run a full node.

“If cryptocurrencies are for people, not just for banks, then it should be possible to run full nodes on normal laptops today.”

While many blockchain developers are working on solutions to this problem, Chepurnoy believes increasing fees could be a secondary measure for limiting the amount of data stored on the blockchain.

But coming up with a sensible fee scheme is easier said than done. Chepurnoy admits it’s “trickier” to put into practice.

Because one way of solving this issue is to make users pay for how long they’d like their state to survive on the blockchain. But this would require users be able to predict exactly how long their state will exist in advance – which they many times can’t do.

“Usually you don’t want to think about how long your money will be alive,” Chepurnoy admitted.

As such, the researchers propose an algorithm, what they call “scheduled payments,” which allows users to add more fees to a transaction over time, in this way, extending the life of the transaction’s state.

Yet, another hurdle that the scheme might face is the grueling process of adding new mechanisms to cryptocurrency systems. For instance, Bitcoin Core developers are more choosy when it comes to updating bitcoin with new features in an effort to protect the integrity and security of the cryptocurrency.

There was a little pushback at the Financial Crypto 2018 conference, where one member argued that adding fees on RAM would introduce “perverse incentives,” prompting miners – who are rewarded these fees – to censor the state for their own financial gain.

Still, Chepurnoy believes the proposal might get more attention from ethereum developers, who have considered a similar mechanism called “state storage rent,” and are dealing with a node state that’s growing at an exponential rate.

“We need to avoid this infinite growth.” 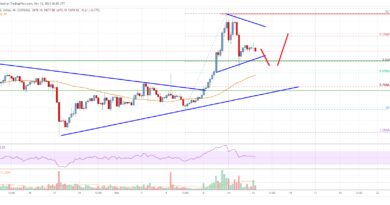