Technology evolves in phases. It starts with a core idea, something crude but ultimately promising. An actual product eventually comes to fruition. When most of the kinks have been worked out, the new tech is introduced to the world. Getting a handful of early adopters isn’t difficult if the project has real value. Taking it mainstream, though, is another story.

Blockchains are sitting on the edge of mass adoption waiting for the right mix of variables to fall into place. Sirin Labs believes it knows what those variables are. The company made a name for itself a few years ago when it released an expensive ultra-secure smartphone. After some internal shake-ups and a refocusing of ideals, Sirin is back, and it’s ready to bring blockchain to the world.

The History of Sirin Labs

Sirin Labs was founded in 2014. The team’s first project was Solarin, a luxury mobile device dubbed the “world’s most secure phone”. The hardware carried a price tag of around $14,000 but boasted some powerful privacy features, including two-factor authentication, behavioral-based intrusion prevention, and a physical switch to encrypt calls and messages.

Solarin was enough of a success to pull in $10 million in sales. Leonardo DiCaprio and Tom Hardy even endorsed it. Sirin expanded its team and started on a new version. Less than a year later, however, the group announced it was laying off a third of its staff and concentrating on different areas of development.

In late 2017, Sirin launched an ICO along with a new direction for its future. Instead of developing high-end security devices, the team would focus on bringing new technology to the masses. Secure cryptocurrency transactions, a privacy-aware operating system, and more affordable devices – all safe and easy to use.

By the end of the ICO, Sirin had raised just over $157 million, enough to secure the development and release of a smartphone, PC, and open-source operating system.

Sirin’s abrupt change of direction shifted the company’s target to the mass adoption of blockchain. As the whitepaper lays out, the new areas of focus include everything from developing secure hardware to monetizing spare device resources via microtransactions, somewhat akin to Golem or SONM. Sirin is creating an ecosystem around blockchain, and they’re doing it with an eye on usability.

The vehicle for Sirin’s proposed revolution is Finney, an ultra-secure, Android-based smartphone made for privacy and connectability. Finney shares similarities with its cousin Solarin but has a few extra features, like three-factor authentication and a built-in cold storage crypto wallet.

Sirin is also developing the Finney PC. This all-in-one device will essentially be a powered-up version of the mobile phone, including everything from monetized resource sharing to the cold storage wallet. 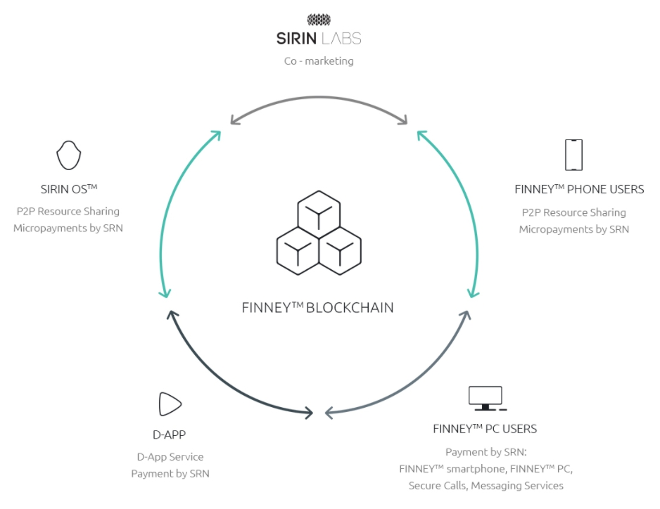 
Secure calls and text messages are great, but Sirin has bigger plans for its operating system, smartphone, and PC. Two of the most exciting features are monetized resource sharing and easy cryptocurrency payments.

Most of the world carries around devices in their pocket that sit unused for 90% of the day. Sirin wants users to be able to sell those extra resources in exchange for cryptocurrency. Got extra storage space you aren’t using? Idle processor cycles? Put them on the P2P market and earn SRN tokens for your trouble.

You can also purchase resources from other users. Imagine landing overseas, your battery almost dead and wireless connection on the fritz. With a Sirin device, you could purchase battery and data from a nearby stranger, all without risking your privacy.

The goal is to make cryptocurrency payments as simple and secure as using a credit card, aiding in mass adoption and encouraging more people to make use of the resource sharing feature.

Sirin is led by co-founder Moshe Hogeg, a developer and investor who also also co-founded Instagram rival, mobli, and the one-tap communications app, Yo. Entrepreneur Kenges Rakishev sits as chairman. His major investments include mobli and the payments app Net Element.

The Sirin Labs team itself is made up of over 50 people, many of whom were brought over from Hogeg’s previous app development ventures, mobil and Yo. For more information, including LinkedIn profiles, see the full Sirin Labs team listing.

Sirin Labs doesn’t have a lot of competition in the ultra-secure smartphone sector. The company’s own Solarin made the biggest splash, and it was only purchased by a few hundred people.

The Turing Phone generated a small amount of buzz, but the company behind the device filed for bankruptcy in early 2018. The Blackphone was released and quickly discontinued in all but a few regions. Neither of these products offered cryptocurrency integration or an open-source security-focused OS, which means Sirin Labs is forging into new territory.

The biggest obstacle to Sirin’s success will be convincing average smartphone users that better device security is a worthwhile pursuit. Topics like encrypted communications and cryptocurrency payments are only just starting to shift into the public’s awareness. Sirin might have to nudge that conversation forward with its marketing efforts but, if successful, both Finney and Sirin OS will be in a great position to capture a massive new security-conscious audience.

How to Buy the SRN Token

Sirin’s ERC-20 cryptocoin is largely intended to power the P2P resource swapping on the company’s devices. It’s a transfer token, not a storage token, which means its true value won’t be apparent until Sirin’s devices are out in the wild.

If you want to get in early, SRN tokens are available in limited trading pairs on cryptocurrency exchanges like Liqui and Bittrex. Sirin recommends using MyEtherWallet for storage. You can also use SRN to pre-order Finney devices and get a 10% discount.


The loss of privacy in the digital age happened slowly and quietly. It started with a few convenience features to boost usability. If our smartphone knows our location,  it can, for example, deliver customized data and local search results. Those features multiplied; now everything from flashlight apps to battery widgets want access to our contacts.

Sirin Labs’ idea is to help users take back control of their privacy while introducing them to new and promising technology. Decentralization takes away the middleman, and crypto payments help familiarize everyone with digital currencies.

Placing these features on a smartphone provides an instantly recognizable environment too, which is a huge boon for adoptability. There’s also evidence that Huawei execs visited Sirin Labs’ headquarters, spurring rumors of a potential investment or distribution deal.

Sirin’s products are scheduled to remain in development during 2018. The Finney will launch by the end of the year or in early 2019.

CZ May Have Pulled An Elon Musk-Style Gaffe On Twitter