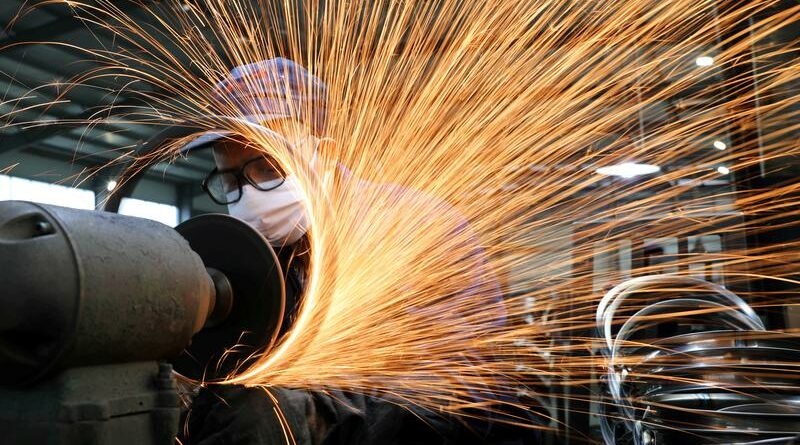 BEIJING (Reuters) – China’s factory gate prices rose at their fastest annual pace in over 12 years in May, driven by surging commodity prices, highlighting global inflation pressures at a time when policymakers are trying to revitalise COVID-hit growth.

FILE PHOTO: A worker wearing a face mask works on a production line manufacturing bicycle steel rim at a factory, as the country is hit by the novel coronavirus outbreak, in Hangzhou, Zhejiang province, China March 2, 2020. China Daily via REUTERS/File Photo

Analysts in a Reuters poll had expected the PPI to rise 8.5% after a 6.8% increase in April.

The surge in PPI has yet to feed through to China’s consumer inflation, meaning the People’s Bank of China is unlikely to worry for now. But there are some signs that Chinese factories, with already tight profit margins, are passing on higher raw material and component costs to overseas clients, which could reinforce the global inflation loop.

“The worry is PPI may hover at an elevated level for an extended period of time, which would create economic headaches if mid- or downstream firms fail to absorb higher costs,” said Nie Wen, chief economist at Hwabao Trust.

Consumer prices saw their biggest year-on-year increase in eight months but came in below expectations and remained well below the government’s official 3% target.

“Producer price inflation is probably close to a peak…we don’t expect (consumer price inflation) to rise much above 2% in the coming quarters. As such, (the data) is unlikely to trigger any shift in monetary policy,” said Julian Evans-Pritchard, senior China economist at Capital Economics.

The release comes as U.S. inflation data on Thursday is being closely watched by investors, who worry another high reading might put pressure on the Federal Reserve to start thinking about tapering its stimulus.

Coal-fired power plants also stocked up on thermal coal to meet surging electricity demand during the summer peak, resulting in a 10.6% month-on-month increase in prices in the coal mining and washing sector, up from 2.8% the previous month, said Dong Lijuan, senior statistician at the NBS.

Prices for commodities including coal, steel, iron ore and copper, which affect the PPI, have surged this year, fuelled by post-lockdown recoveries in demand and ample global liquidity.

Chinese policymakers have pledged to take measures to cool red hot commodity prices and prevent them being passed on to consumers, while the state planner has said China will strengthen price controls of iron ore, copper, corn and other commodities.

NBS data also showed China’s consumer price index (CPI) rose 1.3% in May in annual terms, up from a 0.9% gain in April but lower than the 1.6% forecast in the Reuters poll.

Food inflation rose 0.3% in May from a year earlier on higher prices for freshwater fish and eggs, despite still falling pork prices. That compared with a 0.7% drop in food prices in April.

Non-food prices, including airfares, gasoline and diesel prices, accelerated to 5.5%, likely bolstered by China’s Labour Day Holiday at the start of May.

On a monthly basis, rising factory input costs have started to be passed onto consumers in the sales of fridges, televisions, laptops, construction materials and summer clothes, but their price gains remained mild, NBS’s Dong said.

China’s economy has seen a strong rebound from a coronavirus-induced slump early last year, growing a record 18.3% in the first quarter.

What is CVS Health?