Home » Markets » 'Give the Democratic Darling a run for her money': Tomi Lahren backs AOC challenger 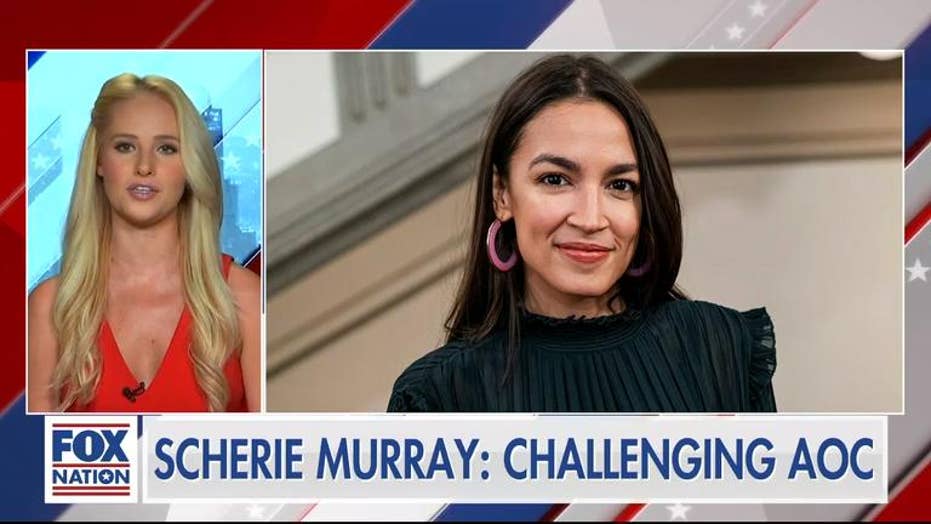 ‘Give the Democratic Darling a run for her money’: Tomi Lahren backs AOC challenger

CELEBRATING ONE YEAR OF FOX NATION — FOR A LIMITED TIME, SIGN UP AND GET 35 PERCENT OFF WITH PROMO CODE: CELEBRATE

Fox Nation host Tomi Lahren had encouraging words for the Jamaican immigrant who is vying for the chance to take on controversial freshman Rep. Alexandria Ocasio-Cortez D-N.Y., in next year's election.

"You’d think it would be pretty dang easy to beat a socialist who knows little to nothing about anything, but here we are," Lahren said on Fox Nation's "Final Thoughts." "Luckily, there is one woman in this race that can give the Democratic Darling a run for her money."

"Still, Scherie Murray is undeterred. She knows the good people of NY-14 deserve better than an attention-seeking socialist princess who wouldn’t know good policy if it served her a drink at the bar," she added, referencing Ocasio-Cortez's former career.

"Unlike AOC, Scherie knows the American Dream is not about a handout or a government check. She knows those who work hard deserve to keep more of what they earn and spend it the way they see fit," Lahren said. "She knows that capitalism and the free market place are key to upward mobility, economic security, and independence. She also knows how big of a threat another term of AOC poses to not only NY 14, but the country as a whole."

Doubling down in her criticism of Ocasio-Cortez, Lahren warned voters of the "threat" she poses and reiterated her support for Murray.

"To some, AOC might seem like a non-threat, like an idealistic idiot with a big social media following — but make no mistake, she is a threat and she has to be challenged," Lahren warned.

When Lahren asked Murray how she planned to unseat Ocasio-Cortez despite the strong support she receives from voters in her district, Murray said it would boil down to a debate to "show how contrasted we are in terms of our policy positions."

"I would love to see AOC debate Scherie Murray, a strong, smart, woman with an immigrant background and American values running through her veins," Lahren commented, reflecting on Murray's earlier interview.

"I don’t care if AOC goes back to bartending, starts selling subscription boxes on Instagram, or assembles Ikea furniture till her heart’s content. We just need to get her the heck out of government," Lahren concluded,  "and I believe Scherie Murray is the woman to do it."

To see Lahren's full remarks and for more episodes of Tomi Lahren's daily commentary offering a refreshing and unfiltered perspective on issues across the country, join Fox Nation and watch "Final Thoughts"  today.

CELEBRATING ONE YEAR OF FOX NATION — FOR A LIMITED TIME, SIGN UP AND GET 35% OFF WITH PROMO CODE: CELEBRATE

Fox Nation programs are viewable on-demand and from your mobile device app, but available only for Fox Nation subscribers. Go to Fox Nation to start a free trial and watch the extensive library from Tomi Lahren, Pete Hegseth, Abby Hornacek, Laura Ingraham, Greg Gutfeld, Judge Andrew Napolitano and many more of your favorite Fox News personalities.

Ted Cruz: Democrats 'in a total panic' over impeachment because their case collapsed

Gallant Exchange Appoints Simon Grunfeld as CEO
We and our partners use cookies on this site to improve our service, perform analytics, personalize advertising, measure advertising performance, and remember website preferences.Ok