London (CNN Business)Republicans and Democrats have been at odds for months over additional spending to help Americans in the wake of the steepest recession on record. The lack of additional stimulus has big consequences for the country’s future.

Six and a half months ago: President Donald Trump signs a $2 trillion stimulus bill, the largest emergency aid package in US history. But economists note that the government will likely have to step up and do more in the coming months due to the magnitude of the shock.
Six months ago: At the height of lockdowns, Americans’ personal income rises 10.5% thanks to $1,200 stimulus checks and $600 in supplementary unemployment benefits from the federal government.

Five months ago: Democrats in the House of Representatives pass a sweeping $3 trillion bill for additional Covid-19 relief. Republicans object to the size of the package, and make clear it’s dead on arrival in the GOP-controlled Senate.
Three months ago: The extra $600 in unemployment assistance runs out, leaving millions of jobless Americans in the lurch.

One month ago: House Speaker Nancy Pelosi and Treasury Secretary Steven Mnuchin indicate that a deal is still possible as airlines warn they need more help. But disagreements remain on key issues, including the price tag of the package.
Nine days ago: As Republicans and Democrats struggle to come to terms, airlines announce tens of thousands of job cuts.
One week ago: Trump is diagnosed with Covid-19, but Pelosi and Mnuchin keep talking after Trump tweets his support for more spending from the hospital.
Three days ago: Trump abruptly orders an end to negotiations until after the election, sparking condemnation form economists and business groups. He later backtracks a bit and tweets that he would back limited support for airlines and another round of stimulus checks, but not a big bipartisan deal.
Happening now: The president is changing course again. Pelosi and Mnuchin spoke Thursday, according to a Pelosi spokesperson. Mnuchin is said to have “made clear the President’s interest” in reaching a comprehensive agreement, despite his earlier remarks.
What’s next: Does that mean more money is on the way? At this point, nobody knows. What’s clear, however, is that crucial time has been wasted while Americans continue to suffer.
The stakes: The recovery is showing signs of petering out. Requests for first-time unemployment claims remain roughly four times pre-pandemic levels. The US economy is operating at just 80% of where it was in early March.
Economists are fed up. “The last thing we need to do is cancel our recession insurance at a moment like this,” Larry Summers, former US Treasury Secretary for President Bill Clinton, said in a recent interview with my colleague Matt Egan. The question is, does the White House agree?

‘Tough months ahead’: Europe’s recovery is in jeopardy

A round of fresh restrictions on businesses looks inevitable in Europe as Covid-19 cases soar. That’s bad news for the economic recovery.
The latest: Europe is now reporting more coronavirus cases than the United States, Brazil and India, according to figures from the World Health Organization. 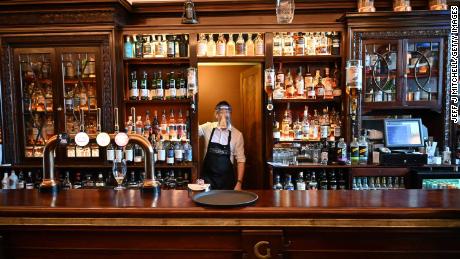 The United Kingdom reported 17,540 new coronavirus cases on Thursday, roughly 3,000 more than the previous day. Germany and Italy both reported their largest daily increases since April. France had 18,746 new infections, a record.
Rules were already getting tighter. In the United Kingdom, for example, bars and restaurants must close at 10 p.m. and people can only gather in groups of up to six. But even stricter regulations will be hard to avoid.
See here: The French government is closing bars in high-risk cities like Lyon and Paris, and the United Kingdom is expected to shut all pubs and restaurants in northern England entirely from Monday.
Such actions spell trouble for a region trying to claw its way back from a historic recession — especially because the recovery was already showing signs of losing steam. The UK said on Friday that the economy grew by 2.1% in August, below expectations.
“The summer rebound from the massive slump in GDP during the UK’s spring lockdown lost more momentum than expected in August,” Berenberg Bank economists told clients. They warned of “tough months ahead as virus risks intensify.”
Berenberg now expects a “big slowdown” in the United Kingdom between October and December, downgrading its expectations for GDP growth to 2% from 2.5%. The bank now thinks the country’s economy could shrink by more than 10% in 2020.

Companies hit by the pandemic are looking to cut costs — and standard salary increases could be on the chopping block. 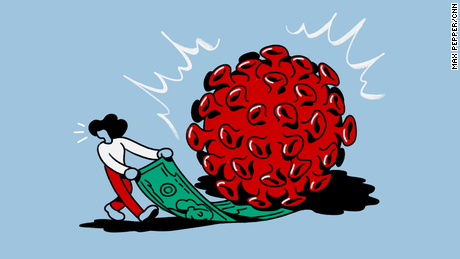 One in six workers won’t receive a pay rise next year, according to a survey of more than 700 US companies released this week by employment advisory firm Willis Towers Watson.
One in three companies have reduced their projections for pay raises next year compared to what they were originally expecting just a few months ago. Half have stuck to their original targets.
“The pandemic’s economic implications have led employers in virtually every industry to rethink their compensation plans and budgets for the coming year,” said Catherine Hartmann, head of the firm’s North America Rewards practice. “For many companies, reducing salary budgets, and in some cases, suspending pay raises, was the most viable option, as they balance remaining competitive with maintaining financial stability.”
Some good news: Two-thirds of companies still plan to give out bonuses in an attempt to hang on to top talent.
But not everyone should count on getting some extra money in their pocket. Such rewards are most likely to go to executives and those in management, the survey found.

The Reserve Bank of India announces its latest interest rate decision.
Coming next week: The biggest US banks will kick off earnings season with crucial information on the health of the economy.
Source: Read Full Article