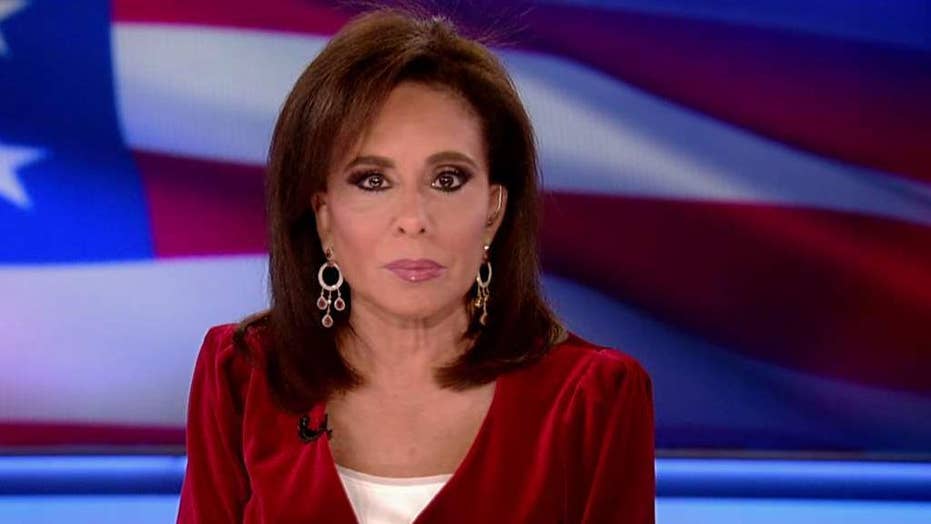 Judge Jeanine: We now have confirmation that the deep state exists

The attempted takedown of President Trump is an outrage that demands the most severe consequence our criminal justice system has to offer.

In her opening statement on “Justice with Judge Jeanine” on Saturday night, Pirro said the deep state “worked to spy on and frame a presidential candidate and plant the seed for his overthrow in the ugliest, most corrupt attempted political coup in U.S. History.”

She went on to say, “That it occurred at all, is stunning. But that it was manipulated to take down a president and remove him from office almost as soon as we put him there, essentially overthrowing a government, is an outrage that demands the most severe consequence our criminal justice system has to offer.”

However, Horowitz’s report revealed there were at least 17 "significant inaccuracies and omissions" in the Page FISA applications.

It also revealed that, at times, the Crossfire Hurricane investigation was not properly sharing information with the Justice Department or key figures who should have been privy to updated information.

“So the inspector general decides the opening of the investigation into whether individuals associated with the Trump campaign were coordinating with the Russians dubbed ‘Crossfire Hurricane’ was legitimate and commenced without bias. But almost immediately Attorney General William Barr and United States Attorney John Durham begged to differ saying: ‘We do not agree with the inspector general report’s conclusion as to predication in how the case was opened,’” Pirro said on Saturday.

“The [Former FBI Director James] Comey FBI counterintelligence division believes they can investigate anyone based on what someone heard in a bar and then run with it. But these guys, they didn’t just run with it, they took every left turn and ran every red light in their effort to get their man.”

Durham is conducting a wide-ranging investigation of the origins of the Trump-Russia probe. Durham released a rare statement last week saying he disagrees with conclusions of the so-called FISA report that the probe's launch largely complied with the Department of Justice and FBI policies.

Barr publicly disagreed with Horowitz following the release of the long-awaited internal review that concluded the FBI had sufficient reason to launch the extensive Russia probe.

In a statement last week, Barr shared Trump's views that the initial investigation was invasive and launched on the "thinnest of suspicions."

“And although the warrant was to surveil American citizen Carter Page, in truth Page was nothing more than the window through which to view and investigate Donald Trump,” Pirro said in her opening statement. “Thereafter every one of the 17 errors that the inspector general identified was indicative of the desire to get Donald Trump to continue spying and wiretapping. That’s right, I said it, spy.”

Pirro was referencing the fact that Horowitz’s report also revealed that the FBI’s Crossfire Hurricane team indeed used "Confidential Human Sources" to contact and record conversations with Page, former Trump campaign foreign policy adviser George Papadopoulos and another "high-level" campaign official who was not a subject of the probe.

“Even more sinister is that the target, ladies and gentlemen, really wasn’t the campaign. The target was Donald Trump himself,” Pirro said on Saturday.

“Carter Page was not the man they were interested in, he was the vehicle through which they could watch and listen, or so they thought.”

COMEY CLAIMS VINDICATION AFTER HOROWITZ FISA REPORT: 'SO IT WAS ALL LIES'

She went on to say, “The I.G. admits there were significant inaccuracies and omissions and that agents failed to meet their basic obligations. He made clear, the I.G., that every step of this operation was briefed up to the highest level of the FBI. That’d be Comey. They found there were, quote, so many basic and fundamental errors made by three separate hand-picked teams on one of the most sensitive FBI investigations. There was a failure of not only the operational team, but the managers, the supervisors and the senior officials in the chain of command.”

“So what do you think the chances of that are? Do you really think that there is no bias when everyone on three different experienced teams, all supposedly smart, all make the same mistakes, all against Donald Trump?” Pirro asked.

She added, “Every FBI agent is smart. They are trained. Every one of these agents had years of law school training, courtroom experience. The chances of every one of those getting every one of the 17 mistakes wrong that work in their favor against Donald Trump is slim to none. And it ends up in a four-letter word. Bias. And although Cardinal Jim Comey says ‘I feel vindicated,’ the truth is that even dull, dry Horowitz makes the truth clear.”

Pirro was referring to Comey seizing on the FISA report findings Monday to claim vindication over the bureau’s handling of the Trump-Russia probe in 2016, saying criticism of the probe “was all lies” — even though the inspector general also faulted the FBI’s handling of surveillance warrants in the report.

“So Donald Trump was right from the beginning. He said they were spying on him and wiretapping him, and they made fun of him, and they ridiculed and condemned him and belittled him,” Pirro said in her opening statement. “And although his law enforcement terminology may not have been on point, he was right. Wasn’t he? And every one of the 17 errors identified by the I.G. going against the president and in favor of the radical leftist ideologues indicate no conclusion other than bias.”