New York (CNN Business)Eastman Kodak, the erstwhile photography leader that lost its way in the digital age, wants to reinvent itself as a drug company in the era of Covid-19. And one top hedge fund seems to like the strategy.

Shares of Kodak soared 25% on the news Tuesday. The stock is now up nearly 70% this year.
But it’s been a wild ride for Kodak since the federal government first announced in late July that it would loan Kodak $765 million to help kickstart its pharmaceutical production plans.

Kodak’s stock, which was trading at just $2.62 a share before the news of the loan, soared as high as $60 in a matter of days before pulling back sharply, The stock trades around $7.50 now. 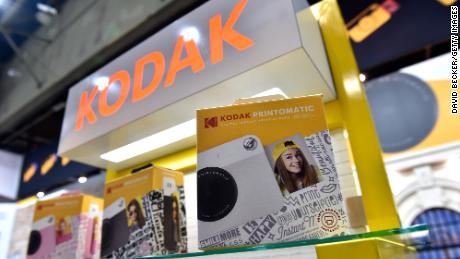 However, the government has since put the loan plans on hold amidst allegations of insider trading and concerns that the Securities and Exchange Commission may investigate the stock’s surge.
Some investors have pointed to the rise and subsequent plunge in Kodak’s stock as yet another example of how speculative the stock market has become. Many traders are buying shares of companies with poor fundamentals with the hopes of cashing in on quick gains.
Kodak, once a leading American industrial company that was a member of the illustrious Dow, went bankrupt in 2012 and emerged from Chapter 11 a year later.
But it has been a shell of its former self ever since then. The company briefly tried to cash in on cryptocurrency mania a few years ago when it launched KodakCoin.
Still, the fact that D.E. Shaw, a highly respected investment firm, has taken a stake in Kodak is noteworthy.
For one, D.E. Shaw bought its stake after the government loan was suspended. So it didn’t invest at the height of the Kodak day trader feeding frenzy.
The firm also is primarily known for making so-called quantitative investments, meaning that it looks at statistical data more than fundamental research about demand for a company’s products.

And D.E. Shaw, which historically not been known as an activist investor, has recently made some investments that were designed to shake things up at underperforming companies. It did so with Lowe’s (LOW) and Emerson Electric (EMR) in the past few years.
There was nothing in D.E. Shaw’s own SEC filing about the Kodak investment to suggest that the Kodak purchase was an activist stake, though. And the company had no comment when asked by CNN Business to further clarify why it bought a position in Kodak.
Source: Read Full Article

State legalizes weed, sells out of $10M worth almost immediately