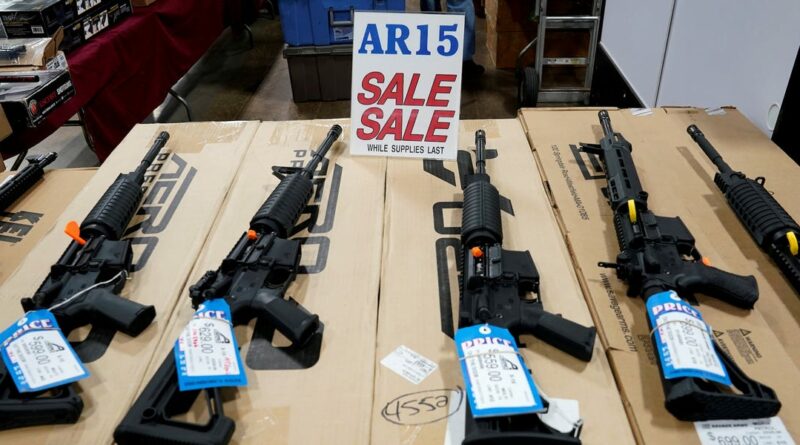 Given the ongoing and divisive debate over gun control in the US, it’s helpful to understand the breakdown of some of the most important terms that frequently come up after mass shootings.

Some of these terms might appear inconsequential, but they relate strongly to discussions on what type of guns and firearm accessories should be regulated more strictly or even banned. And some in the pro-Second Amendment camp have been known to mock people calling for new gun laws when they use incorrect terminology in reference to firearms.

Here’s a summary of some of the more common and contentious terms linked to guns and the broader discourse surrounding them in the US. 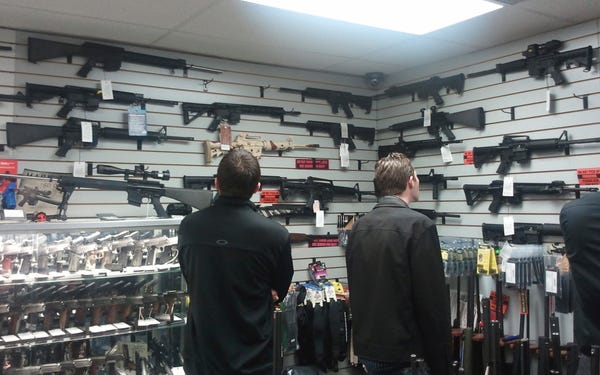 A semi-automatic firearm refers to a gun that fires a single round or bullet each time the trigger is squeezed or pulled, and then automatically reloads the chamber between shots.

An automatic firearm is essentially what many Americans likely think of as a machine gun, or a firearm that continuously fires while the trigger is squeezed or pulled and reloads the chamber automatically.

The vast majority of firearms in the US are semi-automatic and include rifles and handguns. Semi-automatic firearms are available across the US with few restrictions.

The manufacture and importation of new automatic firearms has been prohibited since the Firearm Owners’ Protection Act of 1986. But this still allows for the purchase of automatic firearms made before a certain date in 1986, meaning automatics are technically legal in certain circumstances. 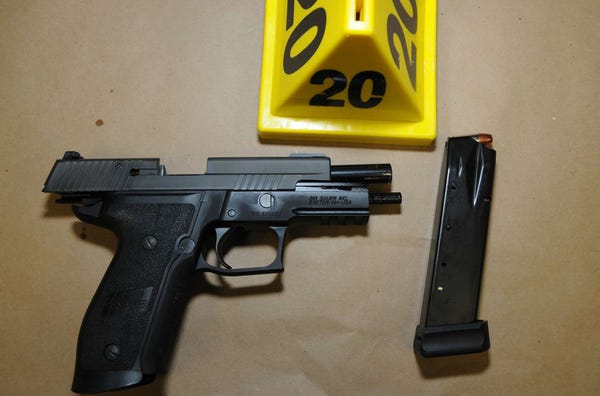 “Magazine” and “clip” are often used interchangeably, though they aren’t the same thing.

A magazine is a container that holds cartridges or rounds of ammunition and feeds them into the firing chamber of a gun. Some magazines are internal, while others are detachable.

A clip holds multiple rounds of ammunition together, often on a metal strip, to be fed into a magazine. Most guns have magazines (revolvers and some types of shotguns do not have magazines), but not all firearms use clips. 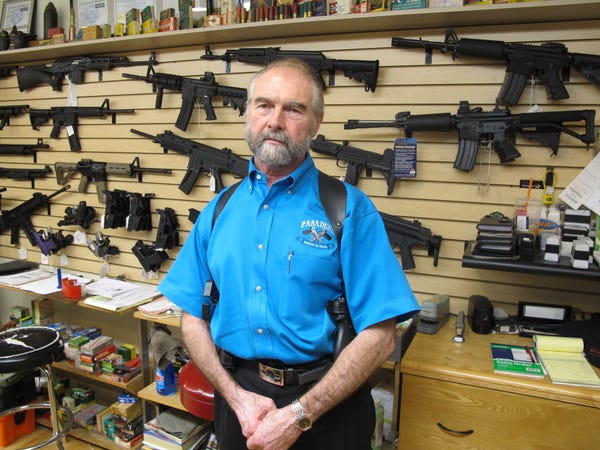 “Assault-weapons” is among the most contentious phrases in discussions on gun control.

There’s not a universal definition of what an assault weapon is, which is part of the reason this subject tends to antagonize the gun lobby or pro-gun advocates.

But in 1994, after the now-expired assault-weapons ban passed, the Justice Department said, “In general, assault weapons are semiautomatic firearms with a large magazine of ammunition that were designed and configured for rapid fire and combat use.”

The gun industry often defines an assault rifle as a firearm with “select fire capabilities,” or the ability to adjust or switch the firearm between semi-automatic and automatic settings or modes.

In short, pro-Second Amendment groups typically say a firearm should only be called an assault-weapon when it’s capable of fully automatic fire — or they reject the terminology altogether.

“None of the so-called ‘assault rifles’ legally owned by US civilians are assault rifles as the term is used in military contexts,” Florida State University criminal justice professor emeritus Gary Kleck, told PolitiFact.

Based on the idiosyncrasies of this issue and the broader debate surrounding it, many gun control advocates tend to refer to semi-automatic firearms that have been used in mass shootings as “assault-style” or “military-style” weapons.

Polling has consistently shown that the vast majority of Americans would support an assault-weapons ban. 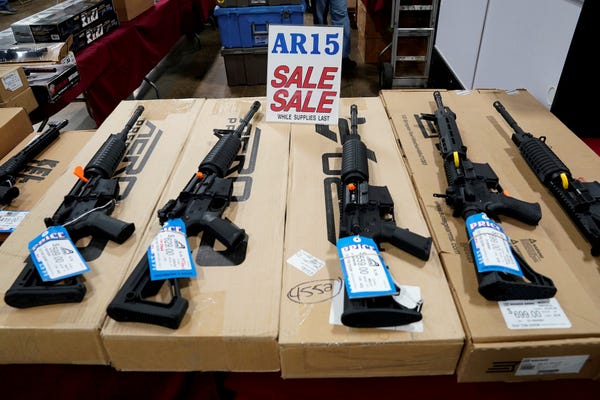 The AR-15 is a semi-automatic rifle and has been referred to by the National Rifle Association as “America’s most popular rifle.”

The “AR” in AR-15 does not stand for “assault rifle,” but is linked to the original manufacturer of the firearm: ArmaLite, Inc. The name stands for ArmaLite Rifle.

The AR-15 was originally developed by ArmaLite to be a military rifle, designing it for fast reloading in combat situations, but the company hit financial troubles. By 1959, ArmaLite sold the design of the AR-15 to Colt, which had success in pitching it to the US military.

“If you’re a hunter, camper, or collector, you’ll want the AR-15 Sporter,” a 1963 advertisement for the firearm said.

Colt’s patent on the rifle’s operating system expired in 1977, opening the door for other manufacturers to copy the technology and make their own models.

The AR-15 was prohibited from 1994 to 2004 via the assault weapons ban. Gun manufacturers promptly reintroduced the AR-15 after the ban expired, and sales went way up.

There are “well over 11 million” AR-15 style rifles in the hands of Americans, according to an investigation by CBS News’s “60 Minutes,” which also notes handguns kill “far more people.”

But AR-15 style rifles have frequently been used in mass shootings, placing the firearm at the center of the debate over gun control — particularly in relation to whether an assault weapons ban should be reimposed. 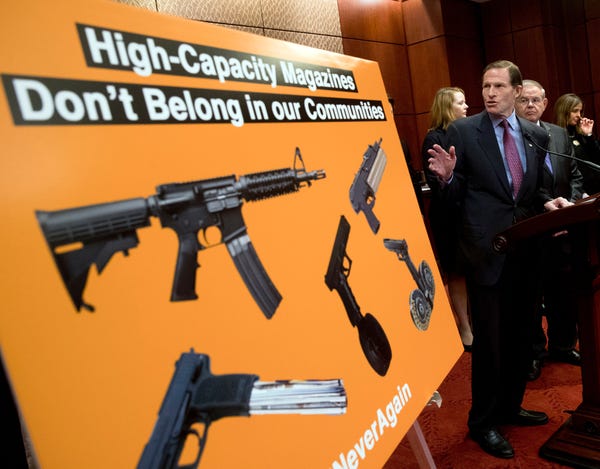 High-capacity magazines are capable of holding up to 100 rounds of ammunition, allowing for dozens of shots to be fired off before reloading. The rifle used in a 2019 mass shooting in Dayton, Ohio, was affixed with a 100-round drum magazine. 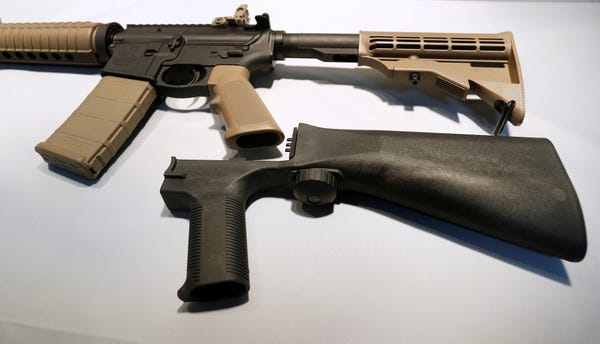 A bump stock is an attachment that allows a semi-automatic weapon to fire at a more rapid rate.

It replaces the standard stock of a rifle, or the part of the firearm that rests against the shoulder. A bump stock uses the recoil effect to bounce the rifle off of the shoulder of the shooter, which in turn causes the trigger to continuously bump back into the shooter’s trigger finger.

Bump stocks were banned by the Trump administration in a large part due to the Las Vegas shooting in 2017, which was the deadliest mass shooting in US history. 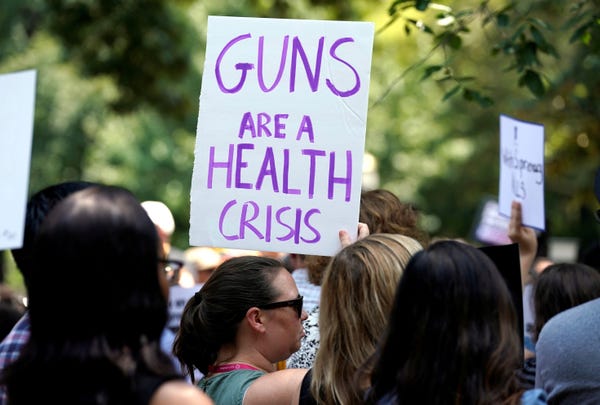 Red flag laws, also known as Extreme Risk laws, allow judges to temporarily confiscate a person’s firearms if they’re considered a danger to themselves or others. 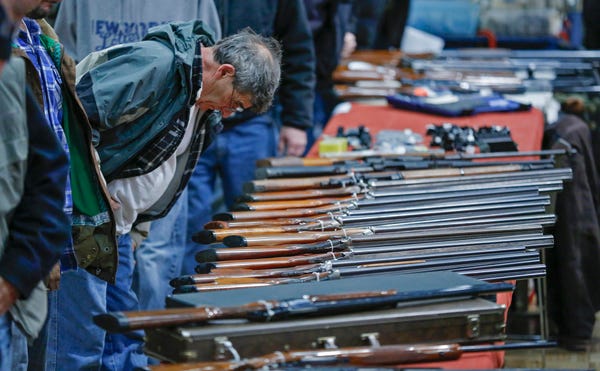 The so-called “gun show loophole” is among the most discussed topics in relation to calls for gun reform advocates for expanded background checks.

“Gun show loophole” is a catch-all phrase referring to the sale of firearms by unlicensed, private sellers at gun shows and other venues — including the internet — without the involvement of background checks.

The Bureau of Alcohol, Tobacco, Firearms, and Explosives (ATF) is the federal agency that licenses gun dealers.

“As a general rule, you will need a license if you repetitively buy and sell firearms with the principal motive of making a profit,” the ATF states. “In contrast, if you only make occasional sales of firearms from your personal collection, you do not need to be licensed.”

It’s also a policy that the vast majority of Americans support. According to polling conducted by Pew Research Center in late 2018, 91% of Democrats and 79% of Republicans favor background checks for private gun sales and sales at gun shows.

Gutfeld on the release of the 'American Taliban' scum