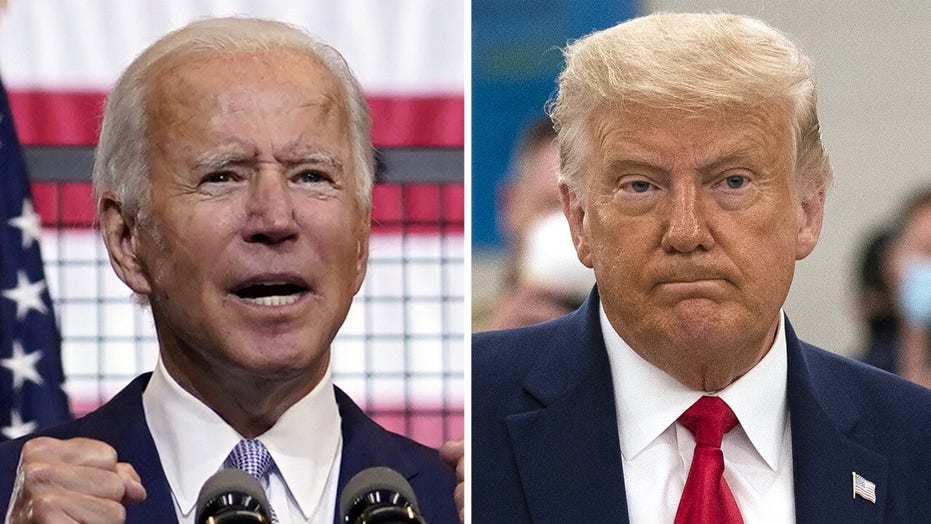 But an average of all national surveys in the White House race shows a slight narrowing in the showdown between the former vice president and the Republican incumbent.

According to a USA TODAY/Suffolk University poll released Wednesday, Biden tops Trump 50-43% among registered voters nationwide. The former vice president's seven-point advantage is down from a 12-point lead he held in the previous USA TODAY/Suffolk University survey, which was conducted in June. The new poll was conducted Aug. 28-31, entirely after the GOP convention.

BIDEN'S BIG BUCKS: REPORTEDLY HAULS IN OVER $300 MILLION IN AUGUST

If the election were held today, a Grinnell College national poll also released on Wednesday shows Biden ahead of Trump 49%-41% among likely voters nationwide. The survey was conducted Aug. 26-30 – both during and after the Republican confab – by Selzer and Company.

An average of all the most recent national polls in the Biden-Trump race compiled by Real Clear Politics indicates Biden up by 6.3 points (48.9%-42.6%). That’s a slight decrease from the 7.8 point lead Biden held in the Real Clear Politics average (50-1%-42.3%) on Aug. 24, at the start of the GOP convention.

But the race for the White House is not based on the national popular vote. If it were, 2016 Democratic nominee Hillary Clinton would be the president right now. Instead, the presidential election is a battle for the states and their electoral votes.

According to the latest polling, Biden retains the edge in most of the key general election battleground states, but his advantage is narrowing.

Four years ago on this date, Clinton held a 4.2-point advantage over Trump. The race tightened and Clinton ended up topping Trump in the national popular vote by 2%. But Trump narrowly edged Clinton in the key battlegrounds of Florida, Michigan, Pennsylvania and Wisconsin, flipping all four from blue to red, to capture the White House.

Suffolk University political research center director David Paleologos told Fox News that – with two months until Election Day but some early voting and absentee voting getting underway this month – "nationally, the race is closing with so many unknowns yet to be determined like a COVID vaccine, racial protests and the state of the economy. Seven key states could determine this outcome."

According to the new Grinnell College survey, Biden tops Trump 56%-34% among women and 64%-31% among suburban women. With an eye to female and suburban voters, the president the past two weeks has repeatedly highlighted his law and order approach to the unrest and outbreaks of violence amid nationwide protests over police brutality against minorities and racial injustice.

THE LATEST FROM FOX NEWS ON THE 2020 BIDEN-TRUMP CLASH

Biden also holds wide advantages among nonwhite voters and those who live in large metropolitan areas.

“Beyond the overall eight-point advantage, this poll shows some areas of underlying strength for the former Vice President,” pollster J. Ann Selzer highlighted. “Mr. Biden holds a wide lead with moderates 55-33%, who are a plurality of the electorate; he benefits from a 10-point lead among independents who do not lean toward any political party, 44-34%.”

The USA Today/Suffolk survey points to significant skepticism about whether the presidential election results can be trusted. If their candidate loses, roughly one in four voters questioned say they aren't prepared to accept the outcome as fair and accurate.

After months of the president claiming that voting by mail will lead to fraud and a rigged election, the poll finds that 83% of Republicans say they are at least somewhat concerned that mail-in voting will lead to voter fraud. Only a third of Democrats share those concerns.

Fifty-six percent of Republicans say they’ll vote in person on Election Day, compared to 26% among Democrats. The poll indicates that Democrats are more than twice as likely than Republicans to vote by absentee ballot or mail.

McConnell: Congress in ‘holding pattern’ due to Trump veto threat