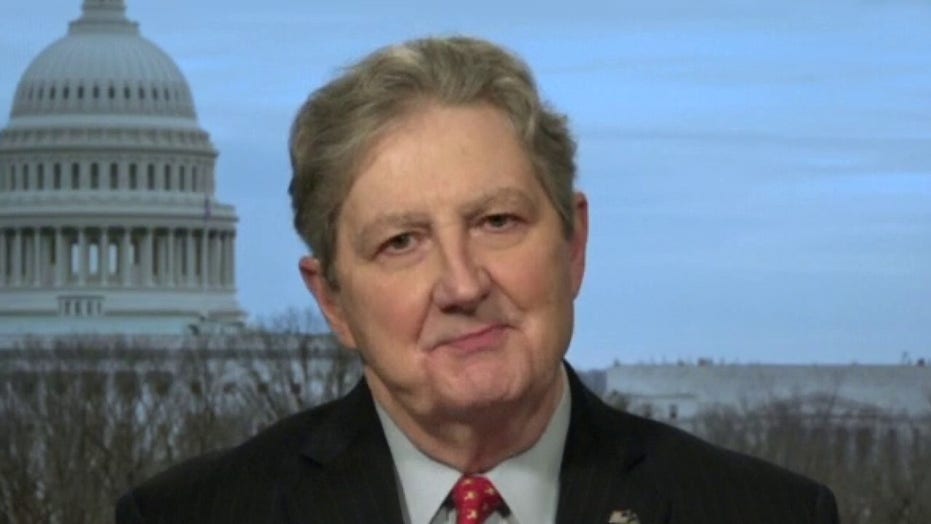 Sen. John Kennedy, R-La., discusses the negotiations over coronavirus relief and the latest in the Hunter Biden investigation.

Sen. John Kennedy, R-La., said President-elect Joe Biden's claim he would not discuss the investigation into his son with his attorney general pick was why a special counsel was needed on the matter.

Incoming White House press secretary Jen Psaki told "Fox News Sunday" that Biden would have an independent Justice Department and, to that end, would not discuss his son Hunter Biden with his pick to run it.

"When I heard that, I thought to myself, whoever wrote that for her did it after their morning beer," Kennedy said on "America's Newsroom." "That implies that Mr. Biden thought about talking to his nominee but decided against it, and that's why we need a special counsel."

Biden has announced many of his Cabinet nominees but has yet to name his choice for attorney general.

Biden has said he is "confident" his son, who is under federal investigation for his tax affairs and overseas business dealings, did nothing wrong. Republicans are calling for the Justice Department to appoint a special counsel for fear that once Biden enters the White House, he will fire the U.S. attorney in Delaware overseeing his son's case. It is traditional for new presidents to remove all current U.S. attorneys when they take office.

Kennedy said it is unclear if Biden is mixed up in any wrongdoing, but a special counsel would help get to the bottom of the matter.

"President Obama put Mr. Biden in charge of the foreign affairs of two countries … Ukraine and China," he said. "In both cases, his son walked away with millions and millions and millions of dollars worth of contracts. I'm not saying there was any illegality, but the appearance that gave was that America's foreign policy can be bought."

Kennedy also discussed the coronavirus relief bill agreed upon by leaders of Congress over the weekend, saying the $900-billion package should provide "real help" but should have come sooner. If it passes as expected, it will be only the second relief package from Washington since the pandemic hit, and the first since March.

"I don't want to say anything to upset anybody at the last minute, but you've got to be careful with old people, as most of us in Congress are," Kennedy said. "They don't like being old in the first place, so they get kind of touchy, and these negotiations were very touchy and we had to be patient, but I think we are going to have a reasonably good result today. It gives more money to small business. It gives more money to the American people. It gives more money to vaccine distribution."

The relief provides $600 payments to people who made up to $75,000 in 2019, with the payments tapered off for those making up to $99,000. It also provides payments to small businesses hurt by the pandemic, expanded unemployment benefits, and tax breaks for companies that took money from the Paycheck Protection Program.