A Roman Catholic priest who publicly questioned whether coronavirus restrictions have gone too far has been diagnosed with COVID-19, prompting local health officials in Washington, D.C., to instruct some parishioners to quarantine.

Monsignor Charles Pope, of Holy Comforter St. Cyprian Catholic Church, was diagnosed with COVID-19 on July 27, the church said in a statement last week. As of Saturday, Pope was reported to be recovering and self-isolating with fellow priests and a seminarian at his rectory.

The priest insisted in a YouTube video Saturday that he had followed all the protocols required of him during services, such as wearing a mask and using alcohol to sanitize his hands. He said he’s not sure how he contracted the coronavirus.

He continued to voice skepticism about the extent to which normal life has been disrupted to try to stop the spread of COVID-19.

“Somewhere along the lines, we have to accept the fact that we live in a world that is risky,” Pope said in the video. “We can take necessary and prudent precautions, but we’ll never completely be able to prevent ourselves from catching a disease, even one that will eventually kill us. We’re all headed eventually for the tomb.”

The priest added that he’s “very sorry for the inconvenience” that his illness has caused to his parishioners. He said he’s upset that the church has to temporarily shutter as a result of his diagnosis.

“That causes me the greatest pain,” he said.

Pope did not respond to HuffPost’s request for comment.

The District of Columbia’s health department director, Dr. LaQuandra S. Nesbitt, said in a Friday letter that parishioners who received communion at the church during certain services from July 25 to July 27 were exposed to the virus and should self-isolate for 14 days.

“DC Health is continuing to work with church leadership to ensure that the guidance and best practices are followed to minimize the risk of COVID-19 among attendees,” Nesbitt wrote.

Pope has voiced skepticism in recent weeks about the sweeping restrictions that authorities have imposed across the U.S. to fight the COVID-19 pandemic, arguing in the National Catholic Register that many Americans are “cowering in fear.” The virus has become “commercialized” because “fear is recognized as one of the best ways to control people, to attract viewers, and to sell products,” he wrote.

Previous generations were tougher in the face of worldwide outbreaks, he argued, and willing to continue with life as normal. The church, too, has “capitulated” to fear by allowing the government to place restrictions on worship.

“While we could not recklessly disregard civil ordinances, too many of us were content to hunker down and forego public Mass,” Pope wrote in the National Catholic Register on July 18. “We must reflect on all that has happened and resolve to never again allow a governor or mayor [to] dictate whether, when or how we may give the sacraments.”

Pope said that during the pandemic he has offered communion privately and has continued to hear confessions at his church.

“Prudence has its place, but my concern as a pastor and physician of souls is that we are allowing unrelenting fear to drive our response,” he wrote. “Until we as the Church [confront] the situation and ‘man up’ as Christians should, fear will masquerade as prudence, and folks like me who question whether we’ve gone too far will be called irresponsible and even reprehensible.” 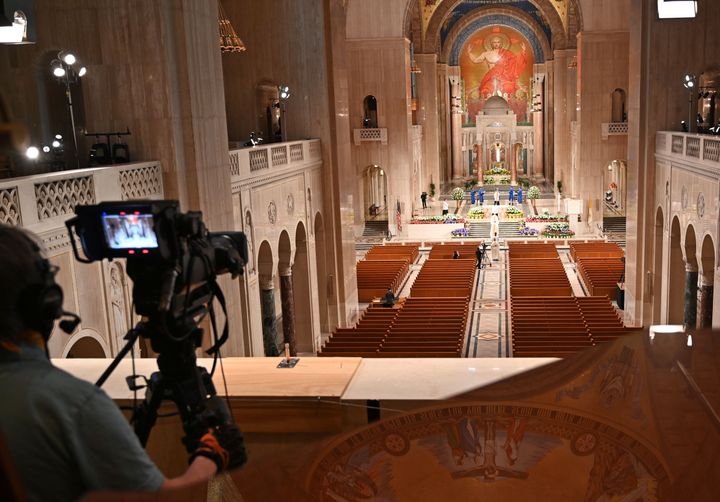 Hours before his diagnosis and hospitalization, Pope repeated his position during a segment on “Morning Glory,” a Catholic radio show that he co-hosts. The priest suggested that many Catholics who haven’t been coming to Mass were “lukewarm.” The label, which has a negative connotation in Christian circles, is typically used to describe those who are indifferent about their faith.

“I think a good number or at least half of that number who haven’t come were the lukewarm,” Pope said on the show. “We may have lost them forever because, in effect, we said, ‘Look, your physical health is more important than your spiritual health.’”

A co-host on the show, Gloria Purvis, argued that there could be many reasons why Catholics were not attending Mass.

“I’d like to think that perhaps the limited availability [of seats at Mass], as well as underlying conditions, pregnancy, cancer, high blood pressure, all these things might be playing a role in people not being able to return,” Purvis said.

Purvis added that she believed “lukewarm” Catholics would likely have stopped coming to Mass after hearing about the sexual abuse scandal surrounding former D.C. Archbishop Theodore McCarrick, who was defrocked in 2019 after a church investigation determined he had sexually abused minors as well as adult seminarians.

“I would think that the lukewarm would have jetted up out of there before this,” she said.

In March, as the coronavirus began to rapidly spread in the U.S., the Archdiocese of Washington, like many other U.S. Roman Catholic dioceses, exempted Catholics from the religious obligation to attend Mass on Sundays and other essential holy days. That dispensation is still in effect. 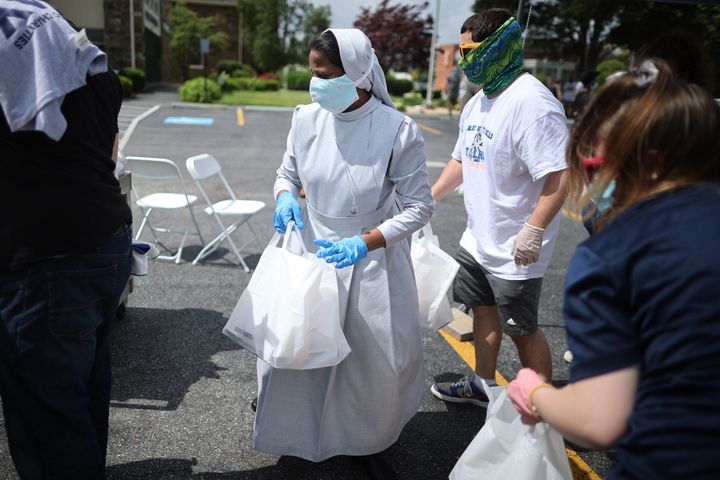 The archdiocese has also developed detailed guidelines on how to distribute communion during the pandemic ― requiring clergy to wear face masks and frequently sanitize their hands, and encouraging parishioners to receive the bread in their hands instead of on their tongues.

The vast majority of people diagnosed with COVID-19 experience mild or moderate symptoms, such as a fever and cough. Others who contract the virus, especially those who are older or have underlying health conditions, can suffer more severe illnesses or even die of the disease. Experts believe the virus is significantly more lethal than the seasonal flu.

As of Monday, Washington had recorded more than 12,000 confirmed cases of the virus and close to 600 deaths.

Pelosi predicts Dems will expand House majority by 'double-digits,' to margin only seen twice since 1995