Republicans in battleground states like Florida are aggressively pushing absentee voting, trying to clean up President Donald Trump’s inaccurate comments claiming that the practice is unreliable and corrupt.

Trump has frequently insisted that with so many people voting by mail because of the coronavirus crisis, the election results may not be legitimate.

“Because of MAIL-IN BALLOTS, 2020 will be the most RIGGED Election in our nations history – unless this stupidity is ended. We voted during World War One & World War Two with no problem, but now they are using Covid in order to cheat by using Mail-Ins!” he tweeted on June 22.

Trump has explicitly said that he’s against expanding this form of voting because he believes that the more people who turn out, the more likely it is that Democrats will win.

Not surprisingly, since Trump ramped up his tirade against voting by mail this summer, polls have started to show that Republicans are less likely to vote by mail than Democrats.

That shift is a problem for the GOP during a time when people may be reluctant to vote in person because of the coronavirus pandemic. And it’s been a particular headache in places like Florida, where the Republican Party has traditionally had a strong vote-by-mail program and uses it to turn out its supporters.

Florida Republicans had a 55,000-vote edge over Democrats in that method in the general elections of 2016 and 2018, according to the Tampa Bay Times. More recently, Democrats in the state said they now believe they have a 500,000-vote advantage in mail-in ballot enrollment.

The Republican Party of Florida is sending out mailers, assuring people that it’s safe to vote by mail and request an absentee ballot. Below are two examples sent to HuffPost by a Florida voter: 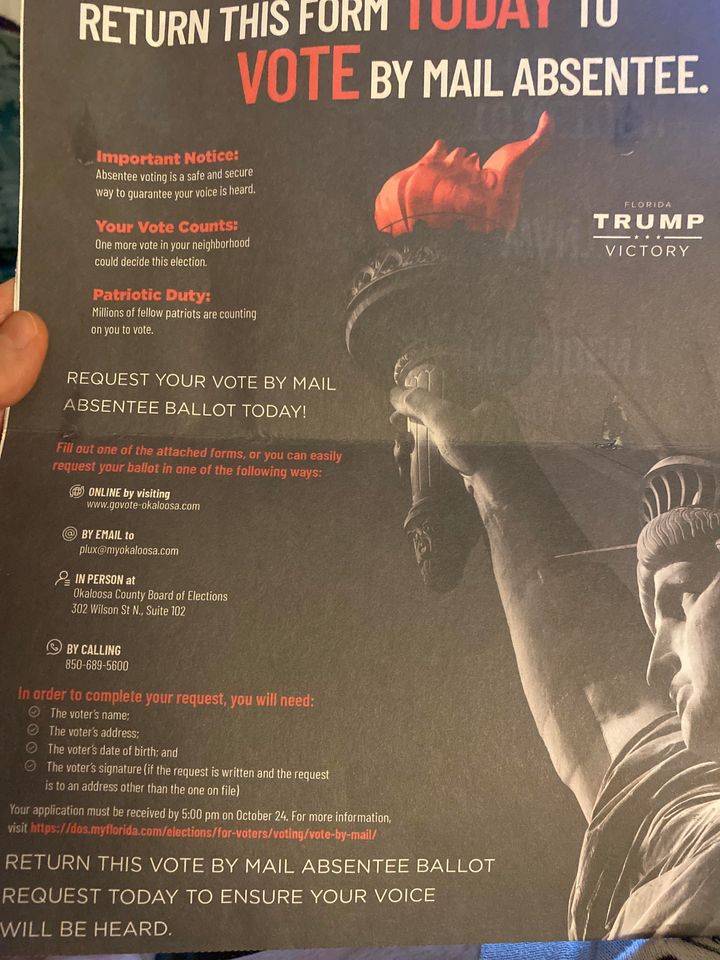 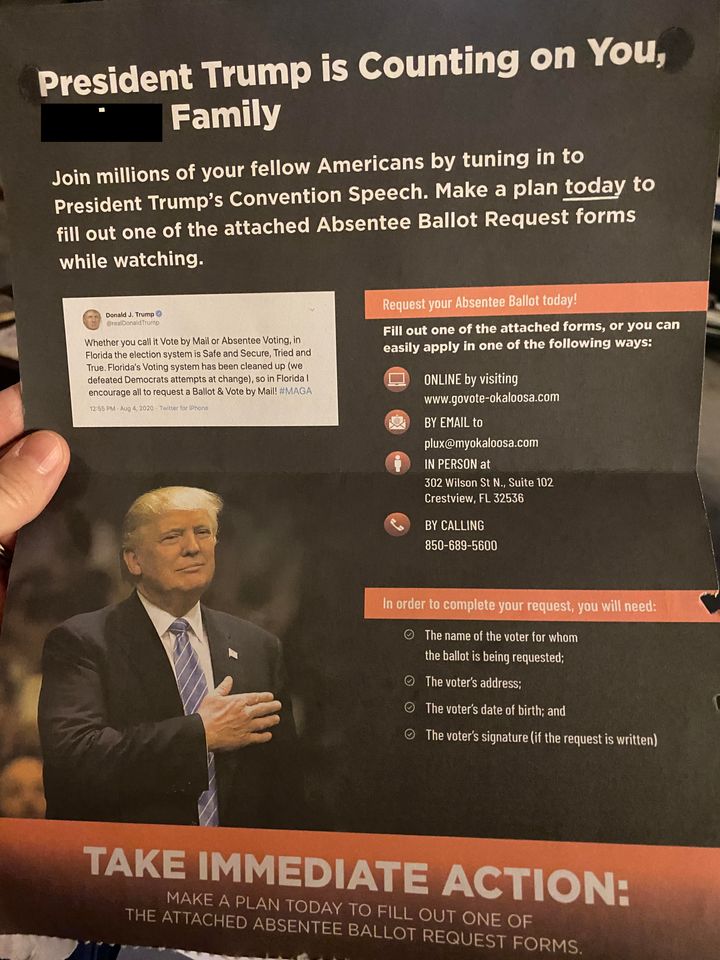 One of the mailers highlights a tweet by Trump trying to clean up some of the damage from his frequent tirades against voting by mail ― insisting that in Florida, for some reason, it’s just fine.

An earlier Florida GOP mailer doctored one of Trump’s tweets to simply highlight the line, “Absentee Ballots are fine. A person has to go through a process to get and use them.”

The rest of the tweet was blurred out: “Mail-In Voting, on the other hand, will lead to the most corrupt Election is USA history. Bad things happen with Mail-Ins. Just look at Special Election in Patterson, N.J. 19% of Ballots a FRAUD.”

“The Republican Party of Florida (RPOF) has always agreed with President Trump that absentee balloting, which is also known as Vote by Mail is safe and secure ― it is also the system that we have in Florida,” said party spokeswoman Alia Faraj-Johnson. “It is important to note that Florida requires a voter, who wishes to vote absentee go through a process which has worked through many election cycles without being compromised and is easily understood by Florida voters. Florida will not and has not proposed an all-mail election to which the RPOF and President Trump remain staunchly opposed to. It’s important that Florida’s system of voting by mail not be confused with universal mail-ins.”

For months, Trump was trying to claim there was a difference between “mail-in voting” (bad) and “absentee ballots” (good). Now, he and his GOP allies are saying acknowledging they’re the same and saying the real problem is universal or all-mail systems.

But voting rights experts say Trump is trying to create a distinction that’s inaccurate. While there are a handful of states where voting predominantly takes place by mail ― Oregon, Colorado, Hawaii, Utah and Washington ― many of those systems have been in place for years, and they do not have problems with voter fraud. (Voter fraud, in any form, is also exceedingly rare.) Additionally, only registered voters receive ballots.

“Oregon has been doing vote by mail since 2000, has mailed nearly 100 million ballots and has only documented a few dozen cases of proven fraud in that entire period of time,” said Sarah Brannon, managing attorney with the ACLU’s Voting Rights Project.

Brannon also said that there’s no difference between “absentee voting” and “mail-in ballots” or “vote by mail.” Different states use different terms and there’s no consistency, despite what Trump tried to claim.

“Donald Trump and his allies have spent months spreading debunked lies about voting by mail, so it’s a bit hypocritical — but hardly surprising — to hear them changing their tune as they fall further and further behind Democrats in absentee ballot requests,” said Biden campaign spokesman Michael Gwin. “The reality is that Trump’s wild and inaccurate claims about voting by mail have only served to depress Republican enthusiasm for voting, even as our campaign and its massive grassroots organization continue to drive record levels of enthusiasm among Democrats for early voting.”

Voters in Florida and other states are also getting robocalls from the Republican National Committee trying to clear up the vote-by-mail issue. It’s created a situation where the GOP has had to go through some hoops to explain why the president himself voted by mail but has still railed against the practice.

“President Trump has already voted absentee this year, and he wants you to vote absentee as well,” says Lara Trump, wife of Eric Trump, in a robocall that went to voters in Florida, Michigan, North Carolina Pennsylvania and Wisconsin. “Let’s set the record straight: President Trump has always supported safe and secure absentee voting, while radical Democrats want universal vote by mail. They sound similar, but couldn’t be more different.”

Another robocall from Donald Trump Jr. in New Mexico stated that “voting absentee is a safe and secure way to guarantee your voice is heard. That’s why President Trump wants you to join him in being an absentee voter this year.”

Trump’s tirades have also stalled bipartisan measures, such as in Michigan, that would fix mail-in voting systems and make sure ballots are counted in a more timely manner.

This piece was updated with comment from the Biden campaign.

We want to know what you’re hearing on the ground from the candidates. If you get any interesting ― or suspicious! ― campaign mailers, robocalls or hear anything else you think we should know about, email us at [email protected].

Bitcoin and Ether Market Update October 1, 2020
We and our partners use cookies on this site to improve our service, perform analytics, personalize advertising, measure advertising performance, and remember website preferences.Ok