Home » Politics » During the 2nd day of Trump's impeachment trial, these chilling videos of violence and close calls were used to make a damning case against the former president 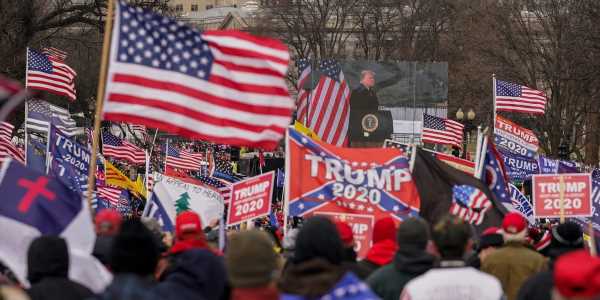 The second day of Donald Trump’s second impeachment trial focused on the former president’s speeches, tweets, and supporters, as House impeachment managers used never-before-seen video and audio clips to try and make the case that Trump’s incendiary claims of election-fraud starting back in mid-2020, directly led to the deadly insurrection at the US Capitol on January 6.

The prosecution began by welcoming the return of Trump’s infamous Twitter account. Democrats highlighted the former president’s own inflammatory words, both on the social media app and at his many rallies, in an attempt to convince Senators that he was undoubtedly responsible for creating, then goading the pro-Trump mob that stormed the Capitol.

Impeachment managers then emphasized Trump’s inaction once his supporters had breached the building.

But the most emotional moments of the day came as the prosecution played never-before-seen video footage from the day of the attack that highlighted just how close so many Senators, House members, staff, and even the then-vice president, had been to the mob.

Impeachment managers used the distressing videos to make a compelling case that Trump’s speech prior to the siege on January 6, in which he instructed the crowd to “fight like hell” right before his supporters attacked the Capitol building, incited the violence and death that day.

At the start of the day, lead House impeachment manager Rep. Jamie Raskin of Maryland issued a warning to parents and teachers about allowing children to watch the trial due to the graphic footage that would be shown from the Capitol attacks.

Rep. Eric Swalwell of California echoed that warning as he played video of the mounting violence on January 6 that led to rioter Ashli Babbitt being shot by a police officer.

Rioters can be heard screaming: “He has a gun! He has a gun!” about a Capitol Police Officer, as they continue to smash windows in an attempt to breach the building further.

The video shows an officer in the corner of the frame pointing his gun at the mob while they break the glass. As they prepare to climb through, a shot rings out and a body is seen falling to the floor.

Impeachment manager Rep. Stacey Plaskett played audio of radio communications between police officers from January 6 that feature their panicked voices pleading for reinforcements as they describe the encroaching mob.

“They’re starting to dismantle the viewing stand. They’re throwing metal poles at us,” one officer said to dispatch.

Plaskett followed by showing heart-pounding footage of the mob’s initial breach of the Capitol building. Rioters rush up the steps of the Capitol, pound on the windows, and use a plank of wood and a police officer’s protective shield to break the glass. The mob then enters the building through the broken window.

All the while, the video shown to the Senate featured a map in the corner of the image with a red dot tracking the location of the mob in relation to the Senate and House chambers that day.

Never-before-seen security footage shows the same moment from inside the Capitol, as a lone police officer tries to spray the first rioter inside the building, but is quickly overwhelmed as the mob rushes in.

Goodman has previously been hailed as a hero for his life-saving actions on January 6, when he single-handedly lured a mob away from the Senate chambers, which had not yet been secured. That incident was caught on video.

In the video, Goodman can be seen running past Romney, then turning him around and directing him to safety as the mob beneath them began to search for the Senate Chamber.

Romney said Wednesday night that he had thanked Goodman.

More security footage revealed in the trial Wednesday showed that Sen. Chuck Schumer of New York and his security detail came within just yards of rioters before turning around at the last moment.

Schumer and his staff can be seen walking out of the frame up a Capitol ramp, then immediately turning around and rushing back from where they came.

The chilling video ends with officers immediately closing the doors behind Schumer, then using their own bodies as safeguards against the door.

In one ominous video, a rioter can be heard calling for Speaker Nancy Pelosi.

“Where are you Nancy, we’re looking for you! Naancyyy, oh Nancy! Nancyy! Where are you, Nancy?” he taunts.

Pelosi’s staff also had a close call, barricading themselves in a conference room as the mob roamed her office.

Vice President Mike Pence also became a target of the mob that day.

Plaskett detailed how rioters began to spread throughout the building just as Pence and his family were quickly evacuated from the building. Video footage shows the then-vice president rushing downstairs and turning around to look back for one brief moment.

“The mob was looking for Vice President Pence because of his patriotism because the vice president had refused to do what the president demand, and overturn the election results,” Plaskett said.

Impeachment managers claimed that rioters were reading Trump’s tweets about Pence in real-time as they stormed the building.

Rep. Joaquin Castro of Texas directly blamed Trump for inciting violence against his own vice president, who tweeted that Pence didn’t have the “courage” to overturn the election results, even after the mob had begun marching toward the Capitol.

The distressing videos clearly made an impact on some senators watching

Following Wednesday’s oral arguments, some senators said they got “teary-eyed” or lost their appetites after watching the trove of alarming video footage.

Romney called the video presentations “overwhelmingly distressing and emotional,” and Sen Lisa Murkowski of Alaska said impeachment managers had made “a strong case.”

But others weren’t quite as moved.

Some Republican senators reportedly doodled, put their feet up, and read as managers made their arguments Wednesday.

The trial resumes tomorrow, where House impeachment managers will continue to try and convince the Senate that Trump’s lies paved the way to a deadly attack on the US Capitol.

Bloomberg dropped $9M on Facebook ads in one week