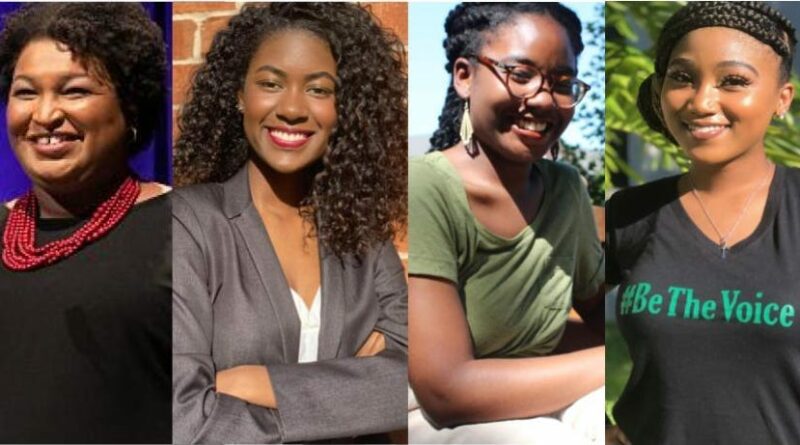 For 20-year-old Deja Mason, a junior at Spelman, this period in the year is a weird "in-between time."

Finals are over; people are on winter break. But as part of the New Voters Project, a non-partisan program to encourage young voter turnout,  Mason said she has spent her free time between her virtual classes in the fall semester trying to get her peers to turn out and cast their ballots. With just days left until the contentious Georgia Senate runoffs, she's reaching out to make sure these voters "have a vote plan," she said.

The Georgia Senate runoffs will decide what party takes control of the Senate, and if Republicans win just one of the two races, President-elect Joe Biden will be the first president since 1989 to not have their party in control of both chambers of Congress.

Following the November election where Biden became the first Democratic presidential candidate to win the state since 1992, Stacey Abrams was credited for the flip, as she helped register 800,000 new voters through Fair Fight, a voting rights organization founded by the former Georgia Democratic gubernatorial nominee after her loss in the 2018 midterm elections.

For Mason, Spelman alumna like Abrams, who graduated in 1995, and other women of color in politics energized her to volunteer and encourage young voters to turnout in the Senate runoff elections.

"I feel Black women, especially such as Kamala Harris and Stacey Abrams," Mason said, "they just give me a lot of inspiration because it shows that I can do what they're doing."

"Spelman College is an HBCU for Black women. It's a place where you can really thrive, and as a Spelman student, I feel like it's given me that space where I can just be myself without having to worry about outside influences and things like that," she told Business Insider. "So when all of these Spelman women are together and trying to advocate for change, it pushes you and it inspires you."

In a video posted on Spelman's website for voter resources, Abrams speaks directly to current students: "I was 17, ready to change the world, and I knew Spelman would be a part of it."

"When I was 17, I set up my first voter registration table helping sign up people to vote long before I was able to do so," she continues. "I'm proud of who you are – I'm proud that you have chosen to become Spelman women," Abrams added.

Dumas, who also spent the semester virtually from home roughly a 50 minutes' drive outside of Atlanta, leads Spelman's Fair Fight chapter, excited to work for an "organization that was literally there to fight voter suppression, and its CEO was an alumna of my college," she said.

The young voters that Dumas and Mason are reaching out to has proven to be an increasingly formidable voting bloc. Young voter turnout in the 2020 election was much larger than four years ago: around 42 to 44% of voters under 30 turned out for the 2016 election, whereas between 52 to 55% of this group turned out for the 2020 election, according to the Center for Information and Research on Civic Learning & Engagement at Tufts University. In Georgia, voters under the age of 30 counted for 20% of all votes cast, according to Tufts University.

"I think young voters understand that if we don't decide for ourselves, someone else will decide for us," Dumas said. "The policies and the legislations and things that are going into action now — if they don't affect us now, they will affect us in the years to come."

Aiyana Edwards, who is in her second year at Spelman, told Business Insider she has been working through RISE, a student advocacy organization, to encourage young people online to make a plan to vote. In the November election, she said she also worked as a poll monitor as part of the Election Protection Coalition.

Edwards said that seeing Abrams' work meant "seeing a Black woman have the opportunity to create her own organization to increase the participation in Georgia," which was inspiring.

In a historic record, about 3 million people have already cast their ballots, according to the Atlanta Journal Constitution. With a few days left before the election on Jan. 5, Edwards, Dumas, and Mason are making a final push for young voters.

Mason, in an appeal to them, said she can understand if they're tired by the continuous political messages ahead of the election.

"There is so much weighing on us," she said, but "using your vote and making sure your voice is heard is extremely significant."