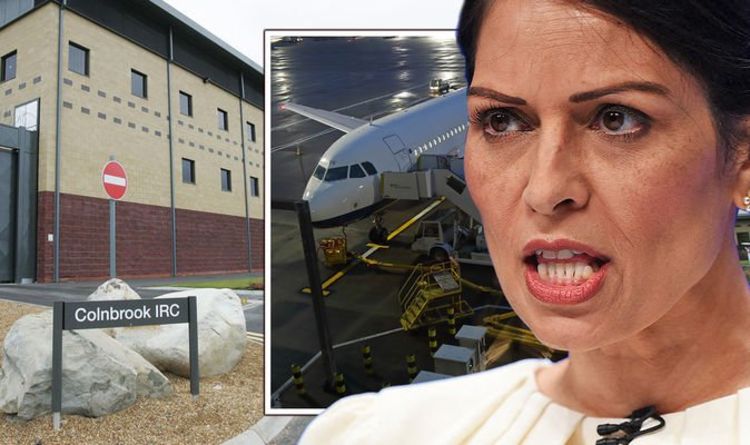 The flight was supposed to deport 37 criminals to Jamaica. But last-minute challenges allowed 33 of the criminals to be let off the hook, according to the Home Office.

The criminals were, between them, guilty of crimes including murder and child sexual offences.

The Home Secretary said it was “absolutely galling” they had been stopped from being deported.

She said in a statement on Wednesday evening: “I make no apology for removing foreign national offenders who have committed crimes which will have had a devastating impact on their victims.

“The people removed to Jamaica today are convicted criminals who have been found guilty of a range of serious offences. They have no place in our society.

“It is absolutely galling that, yet again, last-minute legal claims have stopped the removal of 33 people, including those guilty of abhorrent crimes such as murder and child sexual offences.”

13 of the 33 legal challenges were made in the 24 hours before the flight left the UK, according to the Home Office.

The 37 criminals had a combined total sentence of 127 years.

The four criminals who were deported had a combined total sentence of just over 16 years.

A lawyer representing some of the criminals who avoided deportation said their cases needed to be considered further.

According to the Guardian, they said: “Some due to fly had been unable to access legal advice prior to being detained due to the cost and others had obtained poor-quality advice.

“Most cases were deferred by the Home Office themselves, and in those brought to court it was independent judges who ruled that there were legal grounds why many on the flight list needed to remain in the UK while their cases were considered further.”

But activists – protesting under the banner “Stop the Plane” earlier this week – have expressed concerns that some of the criminals might have been members of the so-called Windrush generation.

The Home Office dismissed this claim, stating that checks had been undertaken to ensure that the criminals were neither British citizens, British nationals nor members of this much-reported generation.

The total capacity of the plane which departed from Birmingham Airport was 432.

Deportation flights are reported to cost, on average, around £200,000.

75 such flights have returned people to other countries since April 2020.

Priti Patel hopes that the Nationality and Borders Bill will make it easier for criminals to be deported and “prevent them from gaming the broken system”.

One Cheap Drug Turns Out to Save Covid Patients’ Lives