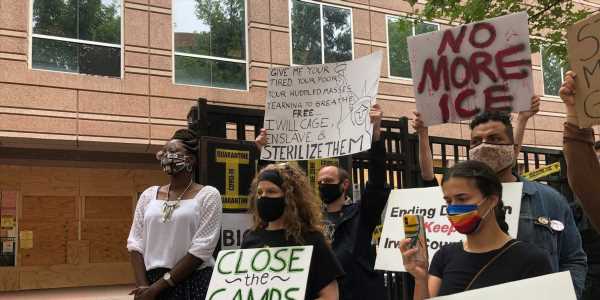 An immigration detention center in Georgia where dozens of people alleged they were subjected to unnecessary medical procedures without their consent is no longer detaining any women, according a lawyer for some former detainees.

US Immigration and Customs Enforcement, including its field office in Atlanta, did not respond to multiple requests for comment.

The Irwin County Detention Center outside Atlanta was the subject of a congressional investigation last year after a nurse at the privately-run facility, Dawn Wooten, alleged that women there were being sterilized without their consent.

A review of medical records, as well as interviews with immigrants detained there, found that women underwent an unusually large number of gynecological procedures, many alleging they were performed without informed consent. Last year, the Mexican government confirmed at least one of its citizens had been the victim of an unauthorized surgery while detained there.

“Do I still have ovaries?” one person asked after waking up from an operation, the Los Angeles Times reported. “Can I still have kids?”

ICE states it only has records of two women undergoing hysterectomies. But dozens of women are now taking part in a class-action lawsuit against Dr. Mahendra Amin, the gynecologist who performed the surgeries, alleging medical malpractice that in some cases is alleged to have been tantamount to sexual assault. Amin is not board certified and LaSalle Corrections, the for-profit company that runs the detention center, has severed its relationship with him.

“ICE knew about this as far back as 2018 and yet they did nothing,” Azadeh Shahshahani, Legal & Advocacy Director at Project South, the group that publicized the whistleblower complaint in September 2020, told Insider. “I think the explanation there is the dehumanization of the Black and brown immigrant women at this detention center.”

Some of those women have since been deported; the majority have been released; and about 80 to 100 men are still there, according to Shahshahani, who is co-counsel on the lawsuit.

Removing the women who were still being detained in Irwin County is an acknowledgement, Shahshahani said, that the critics were right. Still, where some of these women have gone is not seen as much of an upgrade.

The Stewart Detention Center, about 140 miles south of Atlanta, is run by CoreCivic, one of the largest for-profit prison companies. While the facility has over the years developed a reputation for medical neglect, Shahshahani believes it’s been picked — after not hosting women for more than a decade — because it lacks the infamy that now taints the Irwin County Detention Center.

Detention Watch Network, a group that advocates shuttering immigration detention centers altogether, is calling for the women to be released.

“The Irwin detention center is emblematic of how the immigration detention system as a whole is inherently abusive, unjust and fatally flawed beyond repair,” Setareh Ghandehari, the group’s advocacy director, said in a statement. “The Biden administration must shut down detention centers immediately and end detention contracts.”

As of 2019, ICE had contracts with 106 privately run detention facilities, according to a report by the Department of Homeland Security’s Inspector General. The vast majority of detained immigrants are being held in for-profit ventures.

During a speech Thursday, not far from the Irwin County Detention Center, activists interrupted President Joe Biden, demanding that he “abolish private detention.”

“Private detention centers should not exist,” Biden responded, “and we are working to close all of them.”

But that is not what is happening. A week after taking office, Biden signed an executive order requiring the Department of Justice to phase out its use of for-profit prisons — but the order does not not extend to ICE.

On Friday, the Miami Herald reported the Biden administration is conducting negotiations with GEO Group, a private prison company, about renewing a contract to run an ICE detention center in Florida.

“They say the right thing, which is welcome,” Shahshahani told Insider, “but they need to follow that up with action.”

Have a news tip? Email this reporter: [email protected]

At least Bolton didn’t start a war before Trump fired him. For that we should be grateful.

Paul Batura: A man unable to read and write taught valuable lessons to generations of students and teachers