Every day, throughout California’s major agricultural regions, thousands of farmworkers are still piling into dusty vans and buses to be driven to fields and orchards. There, they move through rows of lettuce and onions, strawberries and spinach, often in dense groups, to tend and harvest the food that Americans depend on.

In the coming weeks, thousands more laborers will arrive in other growing centers across the nation, from Washington’s Yakima Valley to the coastal plains of North Carolina and Georgia. These workers and their advocates say that many of the farmers who employ them have provided virtually no information on how they can protect themselves, their co-workers and their families from the coronavirus — creating the potential for a massive public-health and food-security crisis.

There are some 2.4 million farmworkers in the U.S. Of those, anywhere between 47 and 70% are undocumented. Roughly another 200,000 come seasonally on an H-2A guestworker visa, which was thrown into disarray last week when the U.S. closed its embassy and consulates in Mexico.

The precautions recommended by the Centers for Disease Control and Prevention are virtually impossible to carry out on many farms. Fields and orchards provide plenty of space for social distancing, but labor camps and transportation tend to be unsanitary and crowded. Depending on the size of the farm, a single housing unit can hold 200 workers or more. There are no federal guidelines governing what a farmer should do if they don’t have space to quarantine sick workers or how those who may have the virus can access affordable health care. 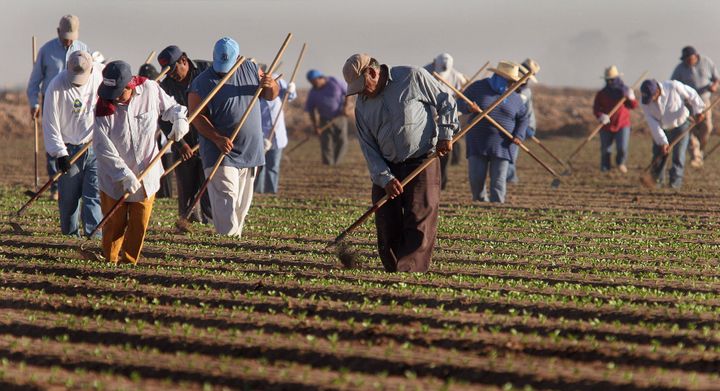 “Workers are petrified,” said Armando Elenes, secretary treasurer of the United Farm Workers, the nation’s largest farmworkers union. “The majority of them don’t have health care, have little or no sick pay and don’t have a safety net.”

Earlier this month, Elenes conducted an informal survey through private UFW social media channels, asking how many workers had been provided information about the coronavirus by their employers. Ninety percent of the 277 respondents said they had received no information at all. Thinking the result was a fluke, he repeated the poll — and got the same response. One respondent said he was told by his employer, “En boca cerrada no entran moscas.” Translation: “Flies can’t get into mouths that are closed.”

Reyna Lopez Osuna, executive director of Pineros y Campesinos Unidos del Noroeste in Oregon, which represents about 7,000 workers, has heard the same thing from her members. “Site supervisors aren’t giving additional training or instructions for disinfection protocols or social distancing,” she said. In addition, workers aren’t being told they should quarantine themselves for 14 days if they feel sick, even though this information is essential for infection control.

On March 17, Elenes and and UFW President Teresa Romero emailed major non-union growers and farm bureaus across the country. The message urged them to ensure the safety of workers through several measures, including extended sick pay and sick leave, offering day care and flexibility to accommodate school closures, and training workers on best practices for avoiding infection.

As this article went to press, not one grower or trade association had responded to the letter. Separate calls by FERN and HuffPost to the American Farm Bureau Federation, the largest grower trade group, and the Western Growers, which represents produce and nut farmers in four states, including California, were not returned.

There is no scientific evidence to date that the coronavirus can or has been spread through food, though experts are warning people to wash all fresh fruits and vegetables. The more urgent concern is that if a large number of farmworkers get sick, there will be no one to harvest America’s food.

So far, the empty grocery shelves consumers are seeing stem from short-term stocking issues rather than real food shortages, said Sylvia Partida, CEO of the National Center for Farmworker Health. “But that can change pretty quickly if you find that the backbone of our agricultural industry becomes affected and you do not have individuals that are harvesting, planting and working on animal production. Then you will see true shortages and interruptions in our food supply.”

American agriculture is a huge economic engine, generating more than 5% of gross domestic product in 2017. U.S. farms alone contributed nearly $133 billion of that. California is easily the biggest producer, with crops and livestock worth more than $50 billion in 2018, followed by Iowa, Nebraska, Texas, and Minnesota. Farmworkers are generally hired to pick fruits, vegetables and tree nuts — the so-called specialty crops that constitute the most recognizable foods that wind up on our dinner tables. While commodity crops — like corn, soybeans, rice and wheat — account for most of the value in American agriculture, specialty crops represent as much as 30% of the value of all U.S. crop production, according to USDA estimates.

For decades, the agriculture business has run on cheap labor provided mostly by migrant workers — undocumented or otherwise — from Mexico and Central America. While wages for workers under the H-2A visa program are somewhat higher and employers cover the cost of housing and international travel, farmworker wages are generally low and they have few rights when it comes to things like job security, paid time off and sick leave. Just last year the National Council of Agricultural Employers (unsuccessfully) sought an injunction in federal court to prevent wages paid for farmworkers in the H-2A program from rising.

Deplorable housing conditions are also a common complaint. Federal guidelines only require dormitories for foreign guestworkers to include at least 40 square feet per person — about the size of a large closet. A 2018 Department of Labor investigation discovered that 22 workers in Monterey County, California, were forced to share a single bathroom “infested with insects,” and that the drinking water was contaminated with nitrates and unfit for human consumption. 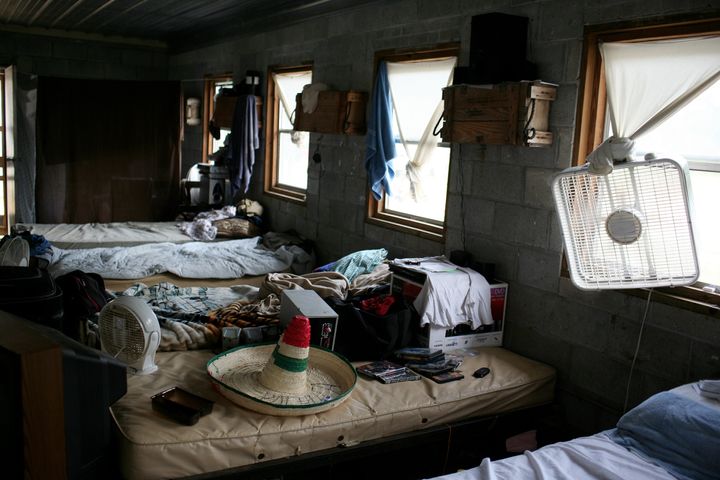 Even so, it’s a tough time to ask farmers to spend money on things like extra housing to allow for social distancing and quarantine for the sick. Seven weeks ago, the USDA forecast the highest U.S. net farm income since 2013. Since then the virus has driven down prices for corn, soybeans and other commodities. Estimated milk prices for 2020 have dropped by nearly $3 billion.

A new report from the National Sustainable Agriculture Coalition estimates that farmers who sell to key local and regional markets such as schools, food hubs, restaurants, farmers markets and other institutions face a $688.7 million decline in sales, as well as “a payroll decline of up to $103.3 million, and a total loss to the economy of up to $1.32 billion” just from March to May this year.

“We lost anywhere from 30 to 50% of our marketplace to the stop in food service, restaurants, travel, hotels,” said Jack Vessey, owner of Vessey & Company, a 10,000-acre produce farm in California’s Imperial Valley. Even an uptick in orders from stores last week — likely from people stocking their pantries — wasn’t enough to cover these losses, he said.

Partido, with the National Center for Farmworker Health, said she’s heard from some employers who say they’re not getting the information they need to prepare. Workers will soon arrive in North Carolina, Maine, Virginia, New Jersey, Michigan and other communities, and there’s an opportunity for federal agencies to issue safety protocols and give employers access to protective equipment. But so far, she said, “there is no coordinated effort” from either the U.S. Department of Agriculture or the Department of Labor.

In North Carolina, at least, the state Department of Health and Human Services earlier this month published guidance for growers on how to safely manage their workforce. The recommendations included, among other things, housing people with symptoms “in a separate room with a separate bathroom from people who are not sick”; and ensuring access to things like “alcohol-based hand sanitizer, tissues, and lined trash cans.”

According to Armando Elenes, some of the UFW’s union farmers are expanding worker protections. (Most already provide health care at no cost.) Oregon’s Beef Northwest is waiving the requirement that workers be employed a minimum of 90 days before they are eligible for sick pay, for instance, and Swanton Berry Farm near Santa Cruz, California, assured its employees they’d still get paid if they become ill.

Charles Muranaka, executive vice president of Muranaka Farm, a UFW grower in Ventura County, California, is sharing safety precautions with his workers in Spanish, both in handouts and in meetings with individual crews. “We’ve adjusted how we harvest our fields to maintain six-foot distance,”  said Muranaka, whose farm employs just over 100 workers to harvest green onions, leeks, parsley, kale and other vegetables.

But only a fraction of farmworkers are covered by union contracts, and these kinds of precautions are very much the exception. As tobacco planting season gets underway in North Carolina, Elizabeth Freeman, director of the North Carolina Farmworker Health Program, a federally funded organization that links farmworkers with health care providers, said worried farmers have told her they have nowhere to isolate sick workers. A housing operator contacted Freeman to say he was expecting 61 workers to arrive at his camp in the next few days. They will all be housed in a unit with six bathrooms, a shared kitchen and beds close together. He has no extra space to quarantine anyone. 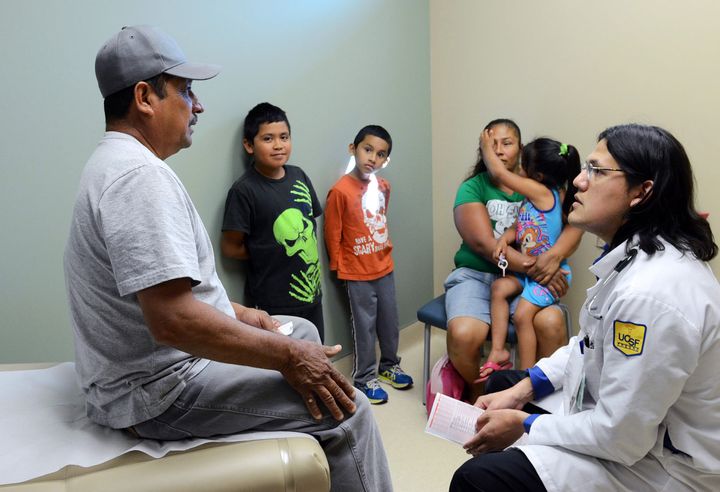 Beate Ritz, a physician and expert in occupational epidemiology at the UCLA School of Public Health, is particularly concerned about infection control among seasonal workers who live in unhygienic conditions. The diabetes rate among farmworkers is “really high,” she noted, which makes them more vulnerable to the coronavirus. On top of that, pesticides can affect the immune system. “So if their immune systems are already compromised and then they are exposed to insecticides and herbicides, that’s a double whammy,” said Ritz.

And if workers do fall ill, they have disturbingly little access to medical care. Many farmworkers, especially those in isolated rural areas, depend on programs like Elizabeth Freeman’s in North Carolina to find a nearby doctor and often need help getting to appointments. Now, though, mobile clinics and in-person outreach at labor camps are being shut down, which means workers are more dependent than ever on their employers if they get sick.

For years, farmworkers have been among the most vulnerable of immigrant groups, vilified for stealing American jobs and often exploited by employers. Now, they are the linchpin guaranteeing the stability of our food supply.  It’s been all too easy for people to ignore their precarious existence, said Beate Ritz: “But think about what the vulnerable do for you, and how you then become vulnerable because you’re not taking care of them.”

This story was produced in collaboration with the Food & Environment Reporting Network, a nonprofit investigative news organization.

Liza Gross is an independent journalist who writes frequently about the intersection between science and society, specializing in environmental and public health.

Esther Honig is a bilingual journalist based in Mexico City and Colorado. Previously, she worked as a reporter for NPR member stations in Colorado, Ohio, and Missouri.

A HuffPost Guide To Coronavirus