The European Union’s chief Brexit negotiator Michel Barnier has been at a stalemate with the UK for months over trade talks. But the latest post-Brexit trade deal with Japan has sent a stern warning to Mr Barnier that the UK is ready for a no deal, a Brexiteer former MEP has claimed. International Trade Secretary Liz Truss said it is a “historic moment” for the two countries which will bring “new wins” for British businesses in the manufacturing, food and drink, and tech industries.

Former MEP Lance Forman wrote on Twitter: “Whilst the EU are doing their best to hold Britain back fearing competition, it seems that others are moving forward in a mutually beneficial way.

“Aside from being an excellent deal, the timing strengthens our hand in EU negotiations.”

The UK-Japan Comprehensive Economic Partnership Agreement was agreed in principle by Ms Truss and Japan’s foreign minister Motegi Toshimitsu, in a video call on Friday morning. 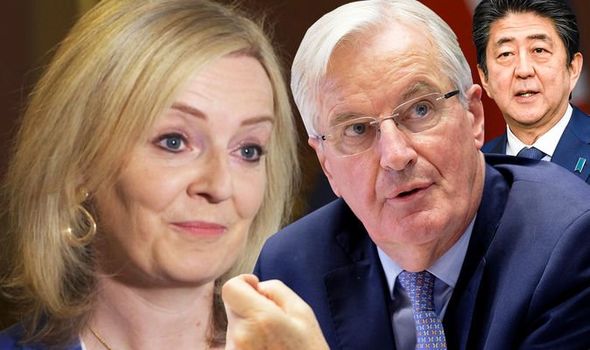 Almost all exports to Japan (99 percent) will benefit from tariff-free trade.

While former MEP Daniel Hannan said: “We have a UK-Japan trade deal that goes deeper and further than the recent EU-Japan agreement.

“Britain and Japan are obvious allies, trade-oriented island monarchies at opposite ends of the Eurasian landmass.”

Pelosi speaks in Ghana about history of slavery, U.S. commitment to African growth