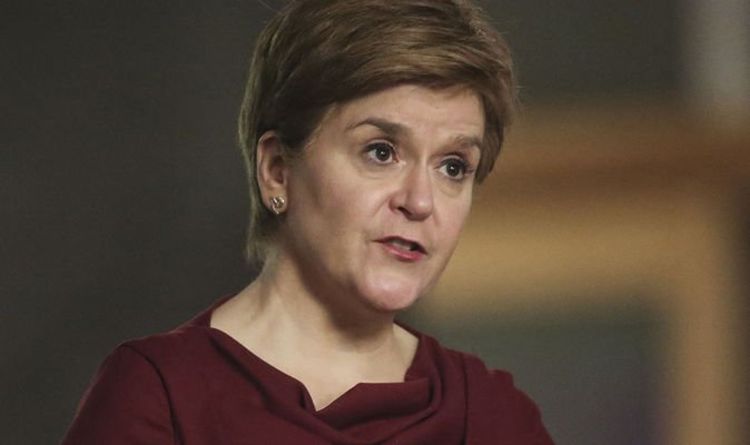 Nicola Sturgeon introduced a number of extra rules before Christmas in a bid to stop the spread of the Omicron variant. Table service only has been put in place for hospitality venues, while strict limits have been imposed on social gatherings.

Only 100 people are allowed at a standing indoor event, top to 200 at an indoor seated event, and no more than 500 either seated or standing, can attend outdoor gatherings.

The rules have had a drastic impact on sporting events and nightclubs in particular.

While Ms Sturgeon has said the rules will be reviewed in three weeks, yesterday Scotland’s national clinical director suggested the restrictions would remain for months.

He suggested Edinburgh’s Hogmanay party, which usually takes place at New Year and is attended by tens of thousands of people, would not be allowed to happen even in the spring.

Jason Leitch told BBC Radio 4 it “might be slightly too early” to hold such a gathering in April.

“I certainly look forward to next year’s Hogmanay, but whether we can bring that forward to April, I think the jury is still out.”

Ms Sturgeon’s authoritarian approach to curbing Omicron infections is in contrast to in England where Boris Johnson is growing increasingly optimistic there will be no need to reimpose measures first adopted in lockdown.

He refused to cave under pressure from scientists to implement extra restrictions before Christmas and there are signs infections in London – seen as the epicentre of the variant’s spread – are already past the peak.

Official figures from the UK Government suggest cases have been dropping in the capital since December 23.

Steve Barclay, the Chancellor of the Duchy of Lancaster, has been chairing regular meetings with fellow ministers over Christmas to closely monitor Omicron.

He told Sky News yesterday: “Of course we keep the data under review, but we’ve seen significant behaviour change as a result of plan B.

“The widespread use of testing is an illustration of the fact that the British public are taking sensible steps to keep themselves safe to keep their friends and family safe.

“That’s why there has been such a demand for testing in recent weeks.

“So that combined with the booster programme is the key way as a country we will avoid the need for further measures.”

In a sign Scots are growing fed up with Ms Sturgeon’s Covid rules, thousands fled south of the border to celebrate New Year’s Eve in England, free from restrictions.

Trains packed with party-goers took those looking to ring in the new year in style from Glasgow and Edinburgh to cities such as Newcastle and Manchester.

Yesterday 137,583 new infections confirmed by a positive test were registered, the lowest figures in six days, although figures from Scotland and Northern Ireland were missing.

Two years after Grenfell and 60,000 people are still living in fear