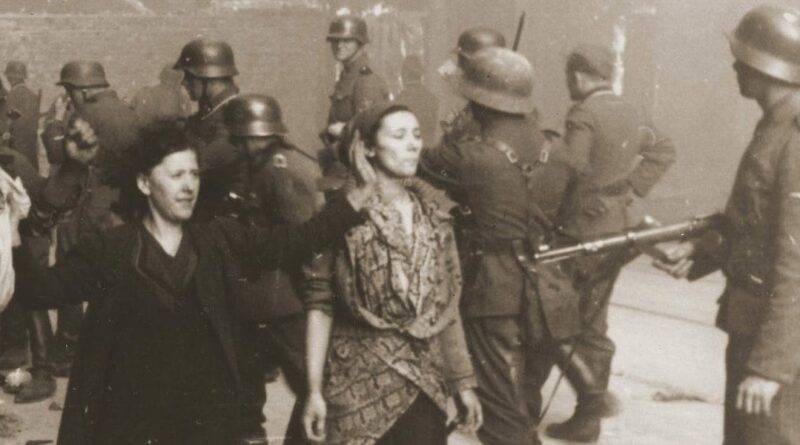 After German dictator Adolf Hitler invaded Poland in September 1939, Nazis began segregating millions of Jews in Eastern Europe into sections of towns and cities designated “ghettos,” eventually stripping inhabitants of their belongings and rights and sealing them in with barricades and armed guards.

In the Polish capital of Warsaw, home to the world’s second-largest Jewish population before the war, Nazis established the largest of more than 1,000 ghettos set up around Europe.

They intentionally housed some 400,000 Jews in inhumane conditions in the 1.3-square-mile Warsaw ghetto, allowing disease and starvation to run rampant ahead of mass deportations to extermination camps.

Years of war and genocide would go by before Allied troops liberated Europe, but as the Nazis systematically murdered millions, pockets of rebellion emerged, including secret Jewish resistance groups.

Among the most famous is the Warsaw ghetto uprising that began on April 19, 1943, when resistance fighters launched a surprise attack on Nazis coming to liquidate the ghetto, leading to the largest ghetto revolt of World War II and inspiring similar rebellions across occupied Europe.

More than one-third of the fighters who rose up in the Warsaw ghetto were women. Many were active in Jewish youth movements before the war.

Ghetto girls defied the typical image of World War II partisans and used Nazis’ misogyny to their advantage. Some smuggled weapons in coffins and grenades in menstrual pads. They carried illegal publications between ghettos in their braids and sewed forged papers into their skirts. They blew up an Auschwitz crematorium with gunpowder smuggled in a teaspoon at a time in their bosoms.

Their courage and sacrifice has remained in the background of resistance histories. A new book by Judy Batalion, “The Light of Days: The Untold Story of Women Resistance Fighters in Hitler’s Ghettos,” recounts how the war’s most unassuming combatants fought Hitler’s Final Solution.

Here are a few of their stories:

Born to a middle-class Jewish family in the rural Polish town of Byten, Zivia Lubetkin gravitated toward youth movements as a teenager.

Despite her parents’ disapproval, she became a leader in a socialist-Zionist movement called “Freedom” in the 1930s, encouraging Jews to go live and work on communal farms, or “kibbutzim,” in Palestine.

In August 1939, when she was living in Warsaw and running educational programs and securing visas for the Freedom movement, she attended a meeting in Switzerland of Zionist delegates from around the world. There, she received a special certificate permitting her to immigrate to Palestine and avoid what promised to be a difficult future for Europe’s Jews.

But Zivia was set on returning to Poland and arrived in Warsaw a day before the Nazi invasion. She moved east to Soviet-held territory, where she led communications and intelligence for her Zionist movement’s efforts to smuggle people to Palestine.

In 1940, she snuck back into Nazi-held Warsaw, joining fellow partisans to run underground educational and social programs, aiding Jewish families facing the horrors of the occupation.

She fought in an attack on Nazis coming to deport Warsaw ghetto inhabitants in January 1943, surviving several days of combat and mobilizing other fighters to build an underground network of bunkers and escape routes in preparation for the next revolt.

On April 19, 1943, as more than 1,000 heavily armed Nazis entered the Warsaw ghetto to transport the remaining inhabitants to death camps, Zivia and fellow fighters threw homemade bombs and fired at the German soldiers.

Their arsenal was a measly supply of smuggled weapons and homemade Molotov cocktails, but they caught the Nazis by surprise and forced them to withdraw for a few days.

Ghetto inhabitants hid in bunkers and sewers, but when the German soldiers returned, they began leveling the ghetto. Because of the armed resistance, the Nazis’ original plan to liquidate the ghetto in a few days turned into nearly a month of guerilla fighting between the soldiers and the inhabitants.

The Germans ultimately slaughtered thousands who were forced out of their hiding places and sent most of the remaining inhabitants to the Treblinka extermination camp. Zivia, though, led a group out through a network of underground sewers and into hiding beyond the ghetto walls.

Soviet forces liberated Warsaw in January 1945. Zivia moved to Palestine and, along with other Polish resistance leaders, founded the Ghetto Fighters Kibbutz and Museum. She testified against senior SS officer Adolf Eichmann in 1961 and gave talks about the Holocaust. She had two children in Israel and died there in 1978 at age 63.

Spared from extermination because Nazis made her work as a photographer, Faye Schulman ran away and joined the partisans as a fighter and nurse whose photographs documented atrocities and resistance activities.

Faigel “Faye” Lazebnik Schulman grew up in Lenin, a town on Poland’s eastern border where Nazis carried out a mass shooting that killed her family and friends.

Faye was spared by the Nazis, who ordered her to work for them developing gruesome pictures of the liquidation, including the murder of her family.

Only 19 years old, she ran away into the woods and convinced a partisan commander to let her join the resistance, where a veterinarian trained her as a nurse.

Schulman helped perform surgeries on gurneys made of branches, once numbing a fellow fighter with vodka before snipping off his wounded finger bone with her teeth.

She kept her Judaism a secret and slept with a gun she used in regular guerilla combat missions, including a raid of her hometown.

After the liberation, she received a medal from the Soviet government and married a partisan commander.

They lived in a displaced-persons camp in Germany and joined an underground organization smuggling European Jews into Palestine.

In 1948, she, her husband, and their infant emigrated to Canada, where she resides today.

Teitelbaum hoped that her petite frame and blonde braids would make her look like an innocent Aryan girl, when in reality she was an armed Jewish partisan who assassinated Gestapo officers and organized a women’s unit within the Warsaw ghetto.

She grew up in Łódź and studied history at Warsaw University. Soon after the Nazis occupied Warsaw in 1939, 22-year-old Teitelbaum volunteered for the underground to fight for fellow Jews and for a free Poland.

Working for the People’s Army and ŻOB, she trained women in the Warsaw ghetto to use the weapons she helped smuggle in.

On one occasion, she walked into a Gestapo apartment in central Warsaw and killed two Nazi Gestapo agents and wounded a third.

Intent on finishing off the injured agent, she gained access to the hospital he was in by putting on a physician’s coat and pretending to be a doctor; then she shot and killed the Nazi and the police officer guarding him.

Her reputation for flirting her way into the company of SS agents and then shooting them in the head earned her a spot on the Gestapo’s most-wanted lists and the nickname “Little Wanda with the Braids.”

She survived the Warsaw uprising, even joining a raid on a Nazi machine-gun position atop the ghetto walls during the fighting, but in summer 1943, a few months after the Warsaw ghetto was destroyed, Gestapo agents captured, tortured, and executed Teitelbaum. She was 25 years old.

Who Should Be Allowed To Adopt Native American Children?

Kayleigh McEnany suggests Pennsylvania should toss out all mail ballots that arrive after Election Day, even though the Supreme Court said they should be counted up to 3 days after