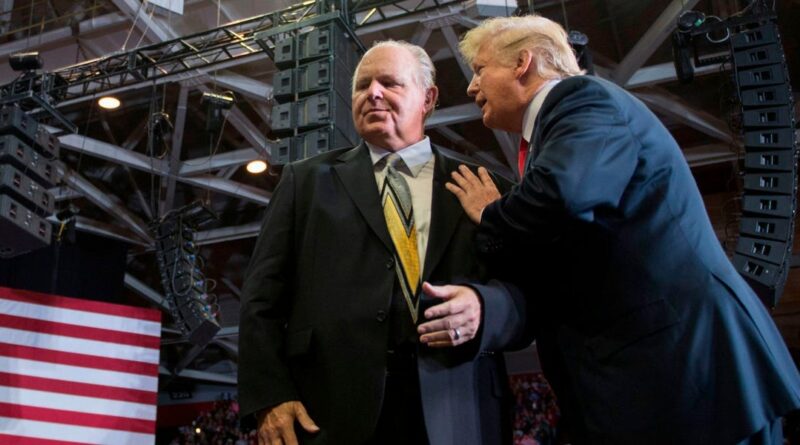 Trump called into Fox News to commemorate Rush Limbaugh, a talk radio pioneer and controversial conservative firebrand who died Wednesday from lung cancer. He was 70.

Trump said Limbaugh’s health was in bad shape for some time, and that they spoke on the phone “three or four” days ago.

“He, in theory, could have been gone four months ago, really,” Trump said. “He was a fighter.”

Further praising Limbaugh, Trump said people “respected him even if they didn’t like him.”

The former president said he became friends with Limbaugh over the course of the 2016 campaign, and that they spoke “three or four” days ago.

“He was a unique guy, and he became a friend of mine,” Trump said.

“I didn’t know Rush at all, I had barely met him,” he added, recalling the day he came down the Trump Tower escalator to launch his campaign. “Without ever having met him or talked to him or had lunch with him, he was right with me from the beginning.”

Trump called Limbaugh “something special,” and credited the disc jockey for some of his success in emerging from a crowded GOP primary.

“Rush felt very early that we were going to win, before the escalator ride, if you wanna know the truth,” Trump said.

The former president also used the opportunity to reiterate his false claims about voter fraud and the 2020 election being stolen from him, saying Limbaugh agreed with him, and that the host understood the “anger” in the country around the legitimacy of the election.

“People were furious, you don’t know how angry the country was,” Trump said.

At another point, Trump said he did not expect to be fond of Limbaugh, but that his fandom eased things over.

Donald Trump gets a history lesson after jaw-dropping gaffe

What does Theresa May's resignation mean for Brexit?