Judge Amy Coney Barrett began making a round of meetings with Republican senators Tuesday, a vital initial step in the confirmation process that President Donald Trump wants wrapped up before Election Day.

“We look forward to a vote in the Senate in the near future,” Pence told reporters. Barrett made no remarks.

Senate Minority Leader Chuck Schumer has said he won’t meet with Barrett. So have Senate Judiciary Committee members Mazie Hirono of Hawaii and Richard Blumenthal of Connecticut. Dick Durbin, the party’s No. 2 leader in the Senate and a member of the panel, said he was open to extending that “courtesy” if Barrett requested it.

Trump is nominating Barrett, a federal appellate court judge, to fill the seat vacated by the death of Justice Ruth Bader Ginsburg. The loss of liberal icon Ginsburg and the confirmation of the conservative Barrett, 48, could cement a rightward shift on the court for years to come.

McConnell and Graham have set a rapid timetable to vote on her confirmation in coming weeks, with four days of hearings starting Oct. 12. That would leave time for the nomination to be considered on the Senate floor before the Nov. 3 election. Since McConnell forced through a change in Senate filibuster rules in 2017, it only takes the support of 51 senators to confirm a Supreme Court justice, rather than 60.

The decision to push ahead on the confirmation just weeks before the election has set off a bitter clash in the Senate. Democrats have accused McConnell and the GOP of hypocrisy, after they prevented Judge Merrick Garland, President Barack Obama’s nominee in 2016 to replace the late Justice Antonin Scalia, from even getting a hearing by claiming it was too close to that year’s election. Garland was named more than seven months before the November 2016 vote.

Democrats have acknowledged there is little they can do to keep Barrett off the court, though that won’t stop the minority party from making its case. One Senate Democratic aide said Tuesday that no Democrat on the Judiciary Committee plans to boycott the hearings — instead wanting to use them to make a case against her and show the public that they are fighting back. 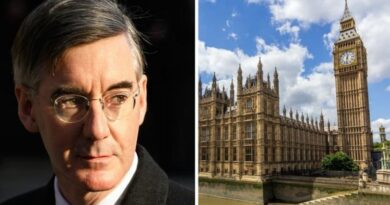 How much?! Taxpayer may face £14bn bill for colossal Parliament rebuild