Was it a hoax? Was it a lie? Was the president sicker than he claimed — or not sick at all? (What does “mild” mean, and how is it different from “moderate”?) Was there any way this alarming news was an ultra-cynical con?

Waking up on Friday to the stunning development that the president of the United States had tested positive for Covid-19 after months of downplaying the virus, some Americans had a similar reaction: Maybe it’s not true.

“I don’t believe it,” said Anthony Collier, a truck driver from Atlanta. “It’s like he’s trying to get sympathy.”

There is no evidence, of course, to support the view that Mr. Trump and his wife, Melania, are anything but ill. As updates on the president’s condition came in, followed by the news that he would be hospitalized, the chatter turned from skepticism that the president was sick to doubts that the White House was being forthright about his condition.

Across social media, in interviews, in conversations, the questions poured in all day from people who have heard so many contradictory things over the last four years — a warp-speed whiplash of conflicting realities — that they no longer know what is true.

“It’s no surprise that no one believes him. We’re in a state where nobody believes anything,” said Armando Iannucci, the political satirist and director who created the TV show “Veep,” among other things.

Nicole Hemmer, a historian specializing in the role of the conservative media in American politics and an associate research scholar at the Obama Presidency Oral History project, said none of this should be a surprise, considering how much misinformation the White House has sprayed across the country, dousing the citizenry in contradictions, distractions and extraneous noise.

“The president and the administration have not historically been reliable narrators,” Ms. Hemmer said. “They often don’t tell the truth about things — or, in the case of the president, they lie outright. So it’s not surprising that people are skeptical.”

The situation was not helped by the fuzzy and incomplete statements emanating from the White House early Friday. Both Mark Meadows, Mr. Trump’s chief of staff, and Kayleigh McEnany, the White House press secretary, refused to answer the question that has dogged every White House since the Nixon era: What did the president know, and when did he know it? When did he find out, for example, that Hope Hicks, the aide he has been in close contact with all week, had tested positive for the virus?

“I’m not going to get into an exact timeline,” Ms. McEnany told Fox News.

As the stock market teetered, the country fretted, and the theories swirled, Dr. Scott Atlas, a top White House coronavirus adviser, declared bullishly on Fox that Mr. Trump would “make a complete and full and rapid recovery.” 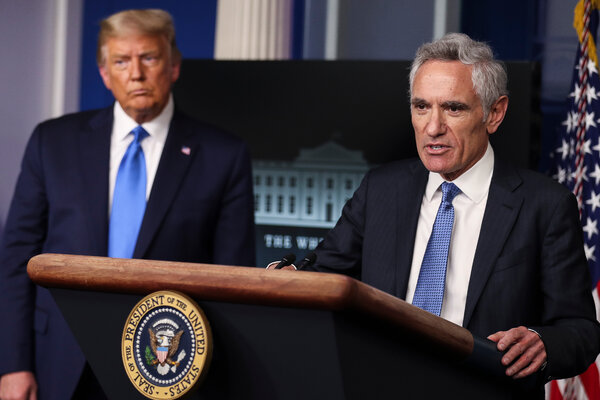 Speaking of a 74-year-old man whose age and weight make him especially vulnerable to Covid complications, and who recently has appeared to have trouble walking down a ramp and lifting a glass of water to his mouth, Dr. Atlas added that “he had never seen anyone with more energy and more vigor, at any age.”

That remark caused the Fox anchor Chris Wallace, who moderated the chaotic presidential debate earlier this week, to break in with an unexpected caveat: pay no attention to the man in front of the camera.

“Folks,” he said, his voice breaking with exasperation. “I’m going to say something, and I’m just trying to give you the truth. Dr. Scott Atlas is not an epidemiologist, is not an infectious disease specialist. There are a number of top people on the president’s coronavirus task force who have had grave concerns about Scott Atlas and his scientific bona fides.”

While the White House and its political advisers might “try to talk this down” for political reasons, Mr. Wallace said, viewers should remember that the coronavirus is an unpredictable disease and that Dr. Atlas has no idea what will happen. “He can’t know, because the president is in the earliest stages of this,” Mr. Wallace said.

Many presidents have downplayed illnesses in the past, or hidden them from the public altogether. This spring, Prime Minister Boris Johnson of Britain contracted Covid and spent more than a week declaring he had mild symptoms, even as his fever spiked. A few days after he recorded a video saying “I’m feeling better,” he was admitted to intensive care, put on oxygen, and reportedly came close to dying. He recovered, but acknowledged later that he had been far sicker than he let on.

It should not come as terribly surprising that a president who rose to fame — in business, on TV and in politics — on an archipelago of mistruths and exaggerations would find himself facing a public skeptical of his account of his own health, especially about a virus whose seriousness he has been dismissing for many months. During Tuesday’s debate, he mocked former Vice President Joseph R. Biden Jr., the Democratic presidential nominee, for wearing a mask.

It makes a certain amount of sense, Mr. Miller added, that this news is “met with people distrusting him and feeling anger and bitterness toward him.”

In the immediate aftermath of the president’s disclosure, even generally sober-minded officials became armchair conspiracy theorists.

“I would not be stunned to learn this was a political stunt to redirect attention from the tax returns and white supremacy,” said Representative Don Beyer, a Virginia Democrat.

James Zogby, the president of the Arab-American Institute in Washington, found himself puzzled Friday by his own roller-coaster of emotions. Like many Democrats still shaken from the 2016 election, his mind went straight to questions about what political advantage Mr. Trump would gain from falling sick.

“In a normal situation we would say, ‘Oh my goodness, the president is ill,’” he said. “What we’re getting is more questions about whether it’s true, whether he’s gaming it and how he’s gaming it. That is quite distressing.”

Even nonpolitical people found themselves asking the question: What’s in this for Trump?

“There’s a lot theories going around, such as maybe he’s doing this to have Mike Pence take over so he could pardon him after the election,” said Josh Gunderson, a 43-year-old welder from Waukesha, Wis. “Any one of these theories is plausible.”

None of this is surprising to anyone who has paid attention to the sort of president Mr. Trump has proved to be, said Eli Pariser, an expert in digital discourse and the author of “The Filter Bubble.”

“Wearing people down about what’s true has always been a strategy of leaders with autocratic tendencies,” Mr. Pariser said. “The chaos and confusion that Trump has channeled so successfully naturally leads to nobody being sure what to believe.”

Nor could everyone control their schadenfreude, a sign of how corrosive these past years have been to American American politics.

“I’m hearing lots of sarcasm, like, ‘Thoughts and prayers, dude!’” said Alma Gonzalez, a Democratic National Committee member from Tampa. “There is in some quarters not just healthy skepticism but outright disbelief and doubt. It’s hard to embrace him as a human being.”

For Trump supporters who have spent the last seven months belittling the seriousness of the virus, arguing that the country should open up and complaining about masks, Friday’s news of the positive diagnosis was quickly followed by a new feeling: outrage that anyone would question the president’s word.

“I think people take him at face value,” said former Representative Sean Duffy of Wisconsin, who was one of Mr. Trump’s warm-up speakers at his rally last month in Mosinee, Wis. “Whatever you want to say about the president, he’s a pretty open and forthright guy.”

Juliana Bergeron, a Republican National Committee member from New Hampshire, added: “I would think everybody would believe it. He tweeted it out himself, right?”

And in Grapeland, Tex., Pamela Fletcher, a former backup singer for traveling Elvis Presley impersonators who is now retired, said she began praying Friday when she learned the president had Covid.

Mr. Trump had purposely downplayed the virus, she said, in order to stop Americans from panicking and to buoy the spirits of people who would have otherwise been anxious about it.

“I believe that he was trying to keep us from worrying that we’re all going to get it. He made himself more human that way,” said Ms. Fletcher, 60. “We can trust him more because he didn’t wear the mask.”

The irony of this latest development is that truth has actually caught up with the president in the starkest of ways.

“It’s a perfect bookend to his presidency,” said Mr. Iannucci, the director. “It started with him pretending that there was no reality other than himself and anything that he claims to be real, and it ends with him being hit in the face with the most profound kind of reality, the existence of this virus which he cannot explain into nonexistence.”

Mortgage Lenders Tighten Screws on U.S. Credit in Echo of 2008