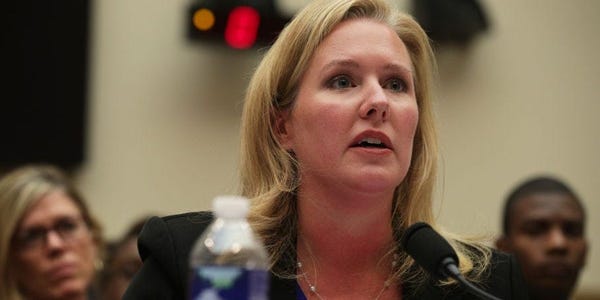 Elizabeth Neumann, a former assistant secretary of the Department of Homeland Security specializing in domestic terrorism, said the Trump administration is allowing right-wing extremists to "start a race war."

Neumann, who resigned in April 2020, appeared on an episode of Skullduggery, a Yahoo News podcast, on Friday to discuss her dissatisfaction with how the speakers at this week's Republican National Convention described Black Lives Matter protestors.

RNC speakers portrayed cities with ongoing protests in Democrat-run states as "lawless," brushing over instances of white supremacists escalating to violence during the demonstrations. Neumann called the portrayals "completely a sideshow to distract from the real threat."

"There are multiple arrests that the FBI has conducted in the last few months at these peaceful protests where you have right-wing extremists coming in trying to take advantage of the cover of the protests to carry out these violent acts and they are trying to start a race war," Neumann said.

Neumann, who also worked under President George Bush, said more people had been killed by white supremacists in the US than every other domestic terrorism threat combined.

"[The most dire threat is] right-wing extremism," Neumann said on the podcast. "It is not antifa."

Members of white supremacist organizations have been tied to violence at protests that have grown common in cities across the US in recent months. As of July 16, there had been 19 instances of people driving cars through crowds of protesters. Only eight people had been charged.

"We need to have an honest discussion with the American people about the nature of this threat," Neumann said. "Quite frankly, if we would just be honest about it, it would reduce the ability for people to be recruited because I think a lot of people don't appreciate what is happening when they are being recruited."

For military personnel, 'mere membership' in a neo-Nazi group 'is not prohibited,' say military officials

There have been at least 19 cases of cars driving through demonstrators since protests began. Only 8 drivers have faced charges.