Both Joe Biden and Donald Trump will visit the Shanksville, PA, memorial site, on the 19th anniversary of the attacks. 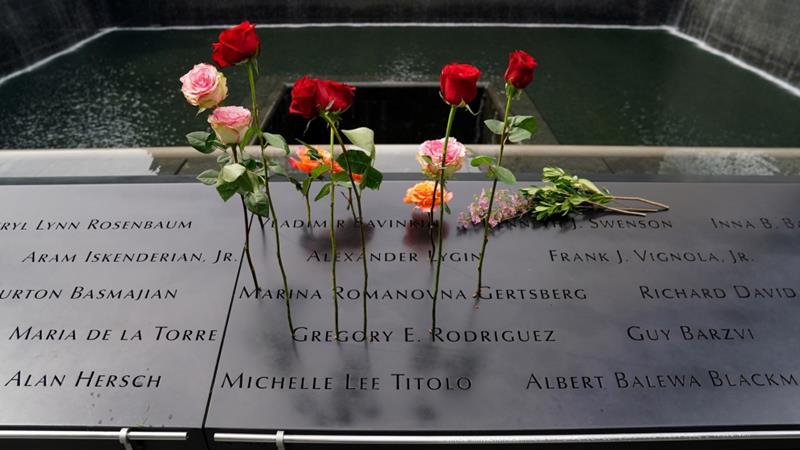 Here are the latest updates:

09:30 ET – Biden backs Trump‘s push to draw down troops from Iraq and Afghanistan

Democratic presidential nominee Joe Biden said he supports President Donald Trump’s push to withdraw US troops from Iraq and Afghanistan, though not completely.

“These ‘forever wars’ have to end. I support drawing down the troops,” Biden told the newspaper Stars and Stripes. “But here’s the problem, we still have to worry about terrorism and [the Islamic State].”

“I think we need special ops capacity to coordinate with our allies,” Biden said, adding that a maximum of “1,500 to 2,000” should remain.

A second independent ceremony not affiliated with the official ceremony takes place at Zuccotti Park near the 9/11 Memorial & Museum, an event organized by the Tunnel to Towers Foundation attended by Vice President Mike Pence and his wife, Karen Pence, and acting secretary of Homeland Security Chad Wolf.

Karen Pence read a passage from Ecclesiastes 3: “There is a time for everything, and a season for every activity under the heavens.”

The vice president followed her with a brief reading from the Bible. “For the families and loved ones and friends they left behind, I pray these ancient words will comfort your hearts, and ours”, he said before reciting Psalm 23, which begins with “The Lord is my shepherd”.

A military guard carries the flag that flew at Ground Zero around the site, Vice President Mike Pence stood not far from Joe and Jill Biden, who were next to Governor Andrew Cuomo, for the moment of silence at the site. Soon after, recordings of the names of the dead were played and a bell rang out for each one.

Everyone in the crowd appears to be masked, some are holding bouquets of flowers, many police, military and firefighters stand at attention.

Before leaving for New York, Biden said he did not plan to make news, or hold any press conferences calling it “a solemn day”.

“I’m not going to talk about anything other than 9/11. We took all our advertising down. It’s a solemn day. That’s how we’re going to keep it.”

The 9/11 commemoration ceremony Biden and his wife will attend will be different from previous years with the names of those killed not being read out live, but pre-recorded because of coronavirus restrictions.

Participants are required to wear face coverings and practice social distancing on the Memorial plaza where the World Trade Center towers once stood.

Hello and welcome to Al Jazeera’s continuing coverage of the US elections. This is William Roberts.

Read all the updates from yesterday (September 10) here.